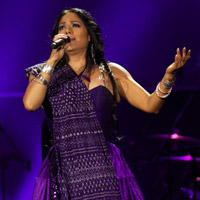 Growing up, Lila Downs would spend one year in the United States and one year in Mexico. Her mother was a cabaret singer living in Oaxaca while her father taught at the University of Minneapolis, and Downs shuttled between the two. It was a world of stark contrasts with some surprising similarities. “Oaxaca is very community-oriented kind of place, and Minnesota is also a very community-based society,” Downs says. “Racially they were very different, but those things were similar.” Now 43 years old and an accomplished singer, Downs blends all sorts of genres, styles, and cultures on her 11th album, Pecados y Milagros (“Sins and Miracles”). This Saturday night, she’ll perform in Los Angeles at the Luckman Fine Arts Complex. Here, she talks about the meaning of the album’s title, the sins and miracles of her own life, and her diverse sources of inspiration.

Tell me about Pecados y Milagros, the new album.
This album has a lot to do with what’s been happening in Mexico in terms of the violence. In Mexico there has been an opportunity to make change, politically as well as by voting, though this process is in question right now. It’s kind of a scary time because there’s so much corruption and the system of justice is ailing. At the same time I think Mexicans keep a lot of hope and faith in our life. That’s why the album is inspired by the traditions of our visual arts.

You mentioned retablos being a big inspiration. What are they?
They’re devotional paintings. They come from a Greek tradition that was adopted fiercely by Mexicans and other Latin Americans. In these little paintings, there is a note of gratitude to the saint. What I find fascinating is that they are also a dialogue with the gods and with the saints. It’s a very therapeutic activity, but it’s also an expression of how we feel about divinity and reality.

What would you say are the musical hallmarks of this album?
Ranchera is really predominant. In my compositions with Paul [Cohen, my husband], we love to do cumbias. We do songs that take from all kinds of genres. Sometimes they’re steeped in traditional Latin forms; sometimes they come from other countries like the Balkan tradition of polkas.

Why ranchera?
I think people tend to look to the songs that permit them to be honest about their emotions. In the U.S. I assume that’s the blues. In Mexico it’s ranchera. When you need to cry or feel sorry for yourself, you look for those tunes because you want to be in that state so maybe you can move on.

I understand the title of the album has a very personal significance for you.
My life was tragic for a while. I couldn’t have a child, and I spent many years trying. In Mexico, where live a lot of the time, there are many Indians and I believe in many of their traditions. I went to an Indian woman, and she healed me of my sadness. I wasn’t able to sing, and that’s what the last album, Shakeaway, was about. I cried a lot and finally I came to the resolution of adopting a baby. Finally I adopted a baby, and I had a renewed faith in life. That is the celebration and the miracle in my life. The sin is many the dark assassinations and dismemberments that you find on the news and how we have to deal with this reality.

Are there any songs on the new album that stand out for you?
I wrote a song for the women who make tortillas, because my son’s name is Chilonen, which means “tender corn.” My grandmother taught me that there’s a reason things come to you, be they ideas or physical things. In Mexico, stand around and observe the women who bring tortillas to any market. They patiently sit around and wait to sell their tortillas and they make 100 to400 of them a day and sell seven of them for 10 pesos, which is less than a dollar. It’s something that’s so fascinating and sacred to our culture because who doesn’t eat tortillas? We kind of take these women for granted, but I think they have the strength we need to look at right now.

What about the pecados?
I went to confession and I told the Jesuit priest that I am a little apprehensive about this album because I composed a song, La Reyna Del Inframundo, about a woman who sings to us from the underworld. She says, “I entered the drug cartel because that was the only way I cold get ahead in my life.” It’s done in the tradition of a calavera. (On Dia de los Muertes, people come out and improvise verses about being dead.) I felt scared about the song, but the priest said, “In order to have miracles, you have to have sin.”

What’s your next project going to be?
I don’t know. I’m still performing the last album. I’ve been traveling to Argentina recently because we have an amazing audience down there. We’ve been creating relationships with musicians, so the next album will probably have something to do with milonga and border songs.

Do you have a strong Southern California fan base?
Definitely. People always assume I live in L.A. or San Francisco. I would love to, but it’s pricey.