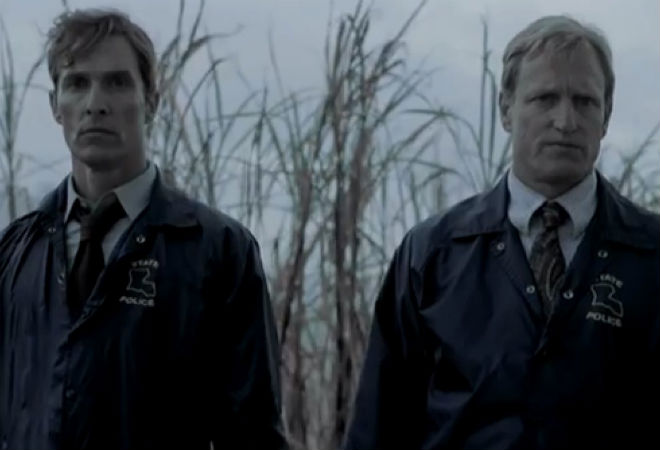 This Sunday night is the premiere of the much-anticipated HBO original series True Detective, a gritty Southern noir starring Matthew McConaughey and Woody Harrelson as two Louisiana lawmen tracking a serial killer. Comprised of only six sixty-minute episodes, True Detective stands out as a brief affair but that’s not the only thing that sets it apart. The show was penned by one man, novelist-turned-screenwriter Nic Pizzolatto, who wrote all six episodes in a garage in Van Nuys over the course of a feverish summer.

Pizzolatto published his debut novel, Galveston, in 2010. His only other foray into TV writing thus far was a brief stint on AMC’s The Killing. It’s highly unusual for a network to entrust one writer with the monolithic task of both creating and realizing a show (Pizzolatto also acts as showrunner), but HBO couldn’t turn down the Louisiana-born creator’s singular vision for True Detective. We chatted with Pizzolatto about working with McConaughey and Harrelson, the paradoxical nature of the South, and the experience of seeing his creative vision materialize.

How did True Detective come about?
It started as an idea for a novel I never wrote. In the summer of 2010 I had decided to get into film and TV writing, so I wrote scripts for six different ideas I had developed and the pilot for True Detective was one of them. The idea came from my love of the police procedural genre. At the same time I felt more could be done artistically with it. It was a desire to tackle a medium I love but with my own particular concerns brought in. I had a very clear understanding of the voices of the two main characters from the beginning. I just instantly knew them. I knew they could act as vehicles for a larger discussion while also moving through the procedural elements of the plot.

At what point did Matthew McConaughey and Woody Harrelson get involved?
They were involved early on. We pitched the show around town with both of them attached to the project. One of the reasons I wanted to do this show as an anthology (the plot of True Detective only spans one season and successive seasons would be similarly self-contained) is that you can tap real cinematic talent, because they’d only be committed to one season. We were kicking around actors and I had just seen The Lincoln Lawyer and knew that Matthew was working on the movie Killer Joe. I thought if he was interested in doing something like that, he would be interested in True Detective.

Woody was on our shortlist already. When we approached Matthew the first thing he said was, “Have you thought about Woody Harrelson?” We said yes and asked if he could help us get Woody on board and that’s how it happened.

I’m not exaggerating when I say that this is dream casting. I don’t think there’s any other combination of actors that can do it as well as those two.

What sets them apart from other actors?
It was important to me that we cast real men who’ve lived real lives. I wanted men who knew about both failure and success in life, family, and responsibility. They both exude this overt, old-school, very American masculinity that I think is essential for these two characters to work. After we got Matthew and Woody onboard I wrote the remaining episodes of the series, and I did that with them specifically in mind. They pretty much are these guys. That was a great gift. To be able to write words for a character and kind of know, this is Woody Harrelson or this is Matthew McConaughey.

What was working with McConaughey and Harrelson like?
I was incredibly grateful and surprised at how Matthew approached the material after he had signed up. He has a very cerebral approach to the character. He really had Cohle [Rust Cohle, McConaughey’s character on True Detective] down from the start. He seemed to understand him the right away. Woody’s strength as an actor is the fact that he has heart; that was a tremendous help to me as a writer. He would push me and say, “Can this line be clearer? Can that line be better?” Together I think they especially understood how to bring out the humor in the material. Despite the dark subject matter, there’s meant to be humor in it. They both did a great job of getting that out. They’re two tremendous actors at the top of their game

Normally a show has a whole staff of writers. You’re a one-man writing army on True Detective. What do you have against collaborative work?
If we end up doing a second season I may use a writing group. I’m not against that per se. As someone with a novelistic background I just didn’t have much interest in creating stories by committee. I don’t think you necessarily get the best story through that approach. That’s just me. But even if you have a large writer’s room a staffer’s job is to serve the showrunner’s vision. I didn’t want to devote my most fertile and creative years to serving someone else’s vision. I wanted to do my own thing while I still had the energy.

What was your writing process like?
Pretty crazy. Over the summer of 2012, when everybody else was on vacation, I was locked up in a converted garage in Van Nuys working on the script. It took two and half to three months—it gets hazy—but about five hundred pages. The walls were covered with post it notes filled with tiny handwriting. My office looked like something out of A Beautiful Mind. That was part of the reason why I didn’t put together a writer’s room. I just didn’t know how to explain to anybody what I had been doing. I powered down and got through it. It was intense. The last two weeks of the writing, my wife took our daughter to visit her parents and when they got back she found me on the living room recliner, shirtless, with empty bottles all around me.

True Detective is set it Louisiana. What is it about the South that makes it such an interesting scene for a crime story?
Its voice is so distinctive. Whatever story you’re telling in Louisiana, the landscape is going to become a character in it. I grew up in Louisiana and spent my formative years there. There’s a contradictory nature to the place and a sort of sinister quality underneath it all. Everything lives under layers of concealment. The woods are thick and dark and impenetrable. On the other hand you have the beauty of it all from a distance. One Southern writer who’s meant a lot to me is William Faulkner. His understanding of the South and its paradoxes is one of the most comprehensive and legitimate artistic portraits of the South that exists. That’s something I’ve tapped into a lot: the dissonances of contradiction. In the South the sacred and the profane exist hand-in-hand.

How so?
I’ll give you an example. We shot one set of scenes in a strip club out in the Louisiana country side and directly across from it, only separated by a narrow street, was a little girls’ dance academy. Both buildings had signs up with silhouettes depicting what went on in their respective interiors. So one silhouette is a little tiny girl in a tutu, which is adorable, the other silhouette is a woman on a pole. I was looking at them and thinking to myself if I were to put this in a novel it would seem hamfisted and way to obvious. Writers of fiction are in a hard place right now because reality today has become so strange that you actually have to tone it down a little bit for it to seem credible.

What does the immediate future hold for you?
I have a lot of material for more True Detective, which I’m working on right now. I’m very excited about it but we’ll have to see if we get a second season. In the TV writing business, you don’t really get to rest until you’re cancelled.