Home Music Q&A: The Wit and Wisdom of Chris Isaak 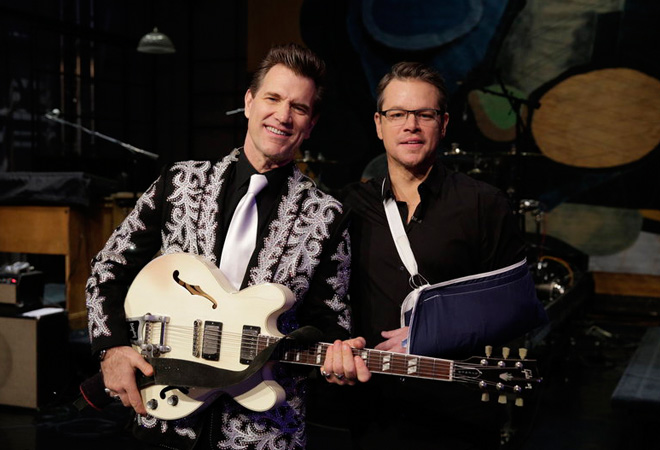 One has a lip curl that would make Elvis jealous; the other blows a mean horn. It’s a convergence of Chrises as the crooner of the sultry “Wicked Game” joins forces with a jazz trumpeter whose foray into pop earned him a Grammy.

Before Chris Isaak takes the stage with Chris Botti at the Hollywood Bowl on July 11 and 12, we had a chance to ask him about boxing, driving, and why he didn’t bother rehearsing for a show with a collaborator he’s never met and a full orchestra.

How are you doing? Are you staying cool up there?
It’s actually hot, which I love. We never get hot weather in San Francisco. I was at my house and my manager came over one time. It was a hot day and she said: Turn on your air conditioning. I said I can’t. And she said God, you are so cheap. I said no, I don’t have air conditioning. She thought it was just so cheap that I refused to turn on my air conditioning because of the electric bill. It made me laugh because my reputation for cheapness precedes me. No, people don’t have it in San Francisco.

I’m recording you, by the way. Is that cool?
Sure, record me as long as it doesn’t mean that later I have to sell my basketball team. Oh that’s right, I don’t own a basketball team.

Tell me about how the collaboration with Chris Botti came to be.
He’s a hell of a trumpeter. Someone proposed it and I listened to his playing. He’s awesome.

Have you met him before?
No. I haven’t met him before. I’m a singer who plays guitar. Every time I go and visit my mom back in my hometown, I try to get somebody to come over and jam. I’m still that guy. People will go “Aren’t you sick of playing? I mean, you do that for a living.” No, I never got sick of it.

To me trumpet is one of those instruments that’s a great counterpoint for a singer. They’re great to play with because they’re not super loud and on top of you; it brings it to such a different place. If you’ve got a trumpet you can go New Orleans, you can go jazz, you can go funk. I am dying to get with him. I know Chris is a great player and writer and there’s a bunch of stuff I’m already writing for another album. Now I’m going, trumpet… yeah.

Years ago I did a couple of songs with Chet Baker and I remember thinking at the time that a trumpet player is about as close as it gets to being a singer. Not like a guitar player who can make a riff just go on and on; they can only make it go on as long as their breath holds. When I would hear Chet playing and singing, I could tell that his singing was very much colored by the fact that he was a trumpet player. There’s a bond there.

How will you decide on what songs to do together?
I think we’re going two out of three falls wrestling match. Winner picks the songs. I outweigh Chris a little bit, so I’ve got a shot.

How’s the show going to be organized?
You stopped me when you said organized. If you’ve ever seen us play, that’s got nothing to do with it! I see some people and they have an act, they have a show, they are very together. One thing that I like about our show is that I’ve had the same band for 30 years. So after 30 years of playing I can walk out on stage, look at the audience, and shift gears and go to a ballad or a fast song or just throw stuff in. I do that sometimes.

But you’ll be playing with an orchestra!
With an orchestra it’s kind of like having the Queen Mary follow you around. I’ve played with orchestras a couple of times and it’s a lot of fun. I write my own music, but I wasn’t a music major, I was an English major in college. I spent most of my time in college boxing. Now when it comes to written music I go: So that’s what it looks like! It’s fun to see rock ‘n roll musicians interface with these classical musicians; they read music and they’re from that other world. Rock musicians, we live and die on whether we swing.

Have you played at the Hollywood Bowl before?
I have. I don’t know if you like old movies, but being a musician I come back from gigs at 2 a.m. Since I don’t have an expensive drug habit, I have tea and watch old movies. The Hollywood Bowl has been in so many of them, like A Star is Born with Fredric March. Onstage all these different things pop into my mind. It sounds good; it’s a nice sounding place.

Do you get down to L.A. much?
I do. I usually drive since 9/11. It’s not that I’m afraid of flying but the flight from San Francisco to L.A., by the time I did security, I could have been there. And I’m always bringing my babies with me. I have a couple of guitars I’m always dragging around. I hate to go on the plane and wave goodbye to my guitars. It’s more fun to throw them in the car.

You have beautiful Gibsons.
I do! I have a couple of really nice Gibsons. I throw them in a car, and I get a lot of work done too. I’ve always got work tapes and it gives me about five hours where I am forced to sit down and listen to what I am working on.

Are you working on a new record now?
I am. I’ve got a bunch of songs. You probably understand this. People who are creative, your friends probably think, you don’t really have a real job and some of your friends also think you’re the person to call when it’s play time… she can play because she doesn’t really have to work.

Is that how your friends see you?
Yes. Until they try it two or three times and they realize I just don’t answer the phone when I’m working. There’s a great Willie Nelson song:
Shotgun Willie sits around in his underwear
Bitin’ on a bullet and tearing out all of his hair
You can’t make a record if you don’t have something to play.

To my mind, that’s him talking about songwriting. You have to sit around your house and pull out your hair.

But you are touring. You have a bunch of shows coming up.
Yes, we have shows coming up. But like I say, because I’ve had the same guys for 30 years, I never worry too much. Some people in L.A., they have to hire the band and teach them the songs. Since those guys played on all these records, it’ll take just a day to brush them off. And because I’m also working with those guys all the time on the new stuff, we stay tight. I told somebody once: We don’t practice, we play.

Do they all live in the Bay Area?
Originally everyone was in the Bay Area but everybody’s kind of spread out now. My drummer Kenny and I are the only ones still here. But I can’t move, by law, because my mom is within 100 miles of here. [In Stockton.] What am I going to do? You think you’re a rock star? I get a call about every other day, “Chris, there’s something that smells funny out by the garbage.” I’m there all the time. I cherish her. My mom is hilarious and really cool. I think I’m funny or I think I’m outgoing and my mom comes around, and I’m a back seat. She really is the funniest. When she’s around people are like: Out of the way, who’s she?

What do you like to do when you come to L.A.?
You know, my manager’s got a dog. When I think of L.A. the first thing I think about is her dog. A lot of people think it’s my dog because they’ve seen me walking it or with it. It’s a little Maltese. Where I grew up there were a bunch of rednecks and nobody had a small dog. That was like unmanly or whatever but now I could care less if people see me walking around with that dog. He has a bad hip so sometimes if there’s a hill or stairs, I am walking for a couple of blocks carrying this little dog. His name is Rodney.

Anything else you want to tell me about the show?
If I don’t screw it up, it’s going to be great. If I stay out of Chris Botti’s way. If I screw it up, I’ve got Chris to count on. If it becomes a train wreck, it will be a marvelous train wreck!

You’ll just tell some jokes. Or you’ll get your mom up there.
I had a good time with those people; we had an orchestra with the Hollywood Bowl before and it was fun. It was fun to drag them into the world of rock ‘n roll for a day.