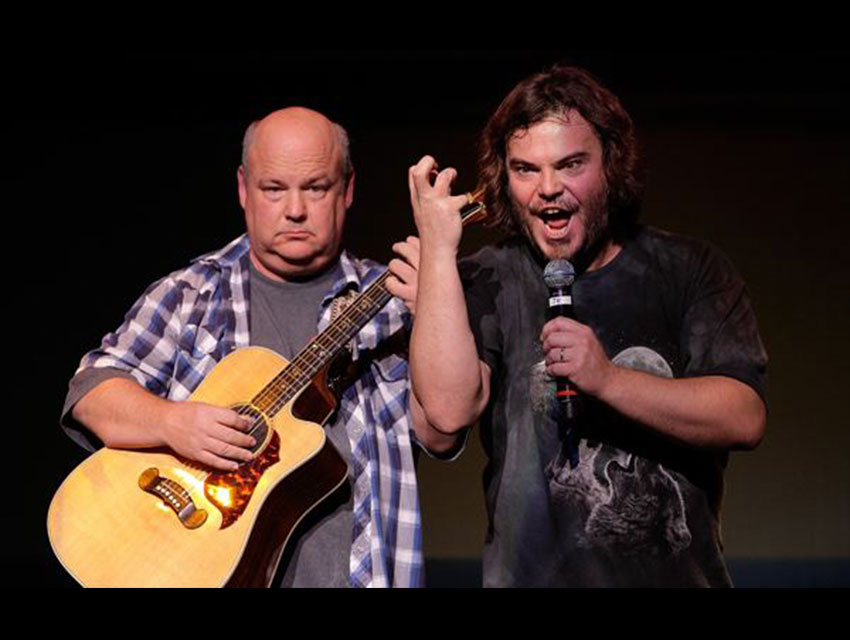 Tenacious D may be the “greatest band in the world,” a title they bestowed upon themselves, but the satirical rock duo knows it can’t rely on joke songs to stay on top. After conquering music, TV and film, Jack Black and Kyle Gass continued their reign of rockitude by creating last year’s comedy and music extravaganza Festival Supreme.

The “Coachella of comedy” returns October 25 to a new home, the Shrine Expo Hall & Grounds, with a lineup seemingly crafted by the gods of hilarity: Cheech & Chong, Fred Armisen, Bill Hader, and tons of other funny people. We caught up with the dynamic duo to chat about Festival Supreme, what’s next for Tenacious, and an awkward encounter they had with Sean Penn. Oh, and the real reason Gwyneth and Chris “consciously uncoupled.”

I understand you guys had wanted to put on a comedy music festival for decades before last year’s Festival Supreme. What took you so long?
KG: Timing wasn’t right. It’s not easy putting on a festival, There’s a lot of moving parts.
JB: We first talked about doing a super show with Flight of the Conchords, Spinal Tap, and The Lonely Island. We were just like “Hey man, let’s put together a concert that will shake the heavens.” And then we kept on saying, “Hey man, let’s make a festival.” And then we didn’t do it.

What was your vision for the festival?
KG: Originally we wanted to call it Monsters of Comedy Rock.
JB: It turned out someone still owns “The Monsters of Rock,” even though it was a heavy metal festival back in the ‘80s. Our name was too close to it. But for our vision, some festivals feature music and a little comedy. We wanted to flip the script and do a festival that was primarily comedy and then some great music. It would be a whole environment, like throwing a party. You want to make sure there’s a lot of things to do. And you want to be able to wander around the grounds and take a sampling from everything—let’s go over there and check out Club Intimacy to have a little taste of the stand-up comedy. Let’s go over to the Mighty Tent and check out some bands. Let’s go over there to check out some performance art. Let’s go over there and check out Neil Hamburger in the One Man Tent. Instead of shuffling the comedians into a tiny tent, we said, “No, they’re going to be the stars.” Our managers and agents said, “It’s a bad investment. Don’t do it!” Finally, we just busted out.

Why did you decide to move it to a bigger venue?
KG: The pier was great, but it was not the easiest place to put it on. There was just geography and the flow of getting people in. We needed more room to stretch out.
JB: We’re going to have a gorgeous, ginormous room but still retain some of the comfort that stand-ups like. They like to have people seated. The spoken word does better when people are relaxed. We learned a little bit about how to make that work. Last year, there was just a bottleneck. You’ve got Patton Oswalt going up and 5,000 people are trying to cram into a 1,000 person spot, so that didn’t work. But we’ve figured it out.

Why did you want L.A. to be the home of Festival Supreme?
KG: Well, we’re Angelenos and so many of [the performers] are here already. We thought that would be easier. L.A. deserves the best festival.
JB: There’s not really any other place we could do it. We’ve got 40 acts, 40 people who live here in L.A. If you did it anywhere else, you’d have to fly everybody out, you’d have to put everybody up—it’s just not economically feasible. L.A.’s kind of the only place you could do it. It’s kind of like the New York song, “If you make it there, you can make it anywhere.” We need to write a different song about L.A. We’ve got Comic-Con down in San Diego, we’ve got Coachella out in the desert, and now, we want to make a Festival Supreme here in the heart of L.A.

Would you consider making the festival a full weekend or adding a second weekend like Coachella has done?
KG: You always hope that it keeps growing and expanding. But let’s see how this one goes. One at a time.

Who are some of the lesser-known performers we shouldn’t miss?
JB: Everyone on the lineup has some rocket sauce of their own. Dethklok Metalocalypse has a great cult following from their show on Cartoon Network. And then you’ve got Drunk History, which is going to do a Drunk History presentation that should be a special encounter you wouldn’t get just from watching the show on TV. We’re going to have Peaches, an amazing musician and performance artist who has a new album coming out around Festival Supreme; that will be an exciting concert.
KG: I’ve been watching a lot of Natasha Leggero. The Protomen. Bo Burnham is great, he’s a genius. Maria Bamford. Mary Lynn Rajskub.
JB: The people that I think will be surprisingly kick-ass will be The Upper Crust; they’re one of our personal favorite bands.

If you could add any performers to the lineup, dead or alive, who would they be?
KG: Elvis, the later years.
JB: Wait a second, what’s the comedy? Oh right, the kung fu Elvis.
KG: Richard Pryor. If we could bring him back to life, I think he would do fantastic.
JB: That would sell some tickets. I’d like to bring back all of the great comedy duos throughout the generations: Laurel and Hardy, Abbott and Costello, the Smothers Brothers, Cheech & Chong—wait a second, we got them. And Tenacious D, we got them too. We got two out of the five of the greatest comedy duos of all time.

What can we expect to hear from Tenacious D? Any new material?
KG: Hmm…
JB: Wait, she’s going to write “long, uncomfortable silence.” We’ll be doing some different stuff than last year. Whenever we play, we’re looking to blow minds. We’ll figure out a way to do that. If that means a whole new set of songs, then it will be a whole new set of songs. If it’s comedy gems that we’ve never played live before, that’s probably going to happen. But I can’t say right now what our set list will be.

How does writing music and performing together feel different now compared to the early days of your career?
JB: When we started out, every show was like a fiery hoop to prove ourselves. Now, every show is kind of like a victory lap. “We did it! We’re back to celebrating our own glory!”

What’s your songwriting process like?
JB: We like to get together at our jam space and make a list of song titles. That was a thing we did on the last album. What song titles are going to look good and you’re going to want to buy the song just by looking at the title? If a title really tickled our funny bone, we’d pursue it. It’s hard work. That was the thing about Mozart, supposedly. He had jams going nonstop in his head.

That’s also what Chris Martin from Coldplay says. That music is playing in his mind all of the time.
KG: That’s probably why Gwynnie gave him the boot. Too many jams.

Are you ever tempted to take a break from comedy and record the type of album we would hear from Rush or Black Sabbath, for example?
JB: Every time we sit down to write music, we’re trying to be the best band in the world. We’re not trying to be a joke. I remember Sean Penn once told us “Hey man, you guys are amazing. You should do some serious music, like Eddie Vedder.” He just didn’t get it. I was like “Aw, thanks man. Yeah, maybe we will.” But in my mind, I was just severely disappointed in Sean Penn’s judgment and his taste. Not that I don’t like Eddie Vedder, he’s a sweet guy.

What’s next for Tenacious D?
JB: After Festival Supreme, we’re going to focus on the next album. If it goes according to the history books, it’s one every five years, right? What we have to do is work on it until it’s absolutely, positively the best album of the year. And we also like to wait until right when people are saying “Whatever happened to Tenacious D? Oh, they’re done.” That’s when we hit them in the gut with a surprise explosion blast of rockitude. We’re also working extremely hard on a Tenacious D webisode idea and the Festival Supreme movie. Look for them in 2015.

Our Fave Festival Fashions from Coachella Weekend One