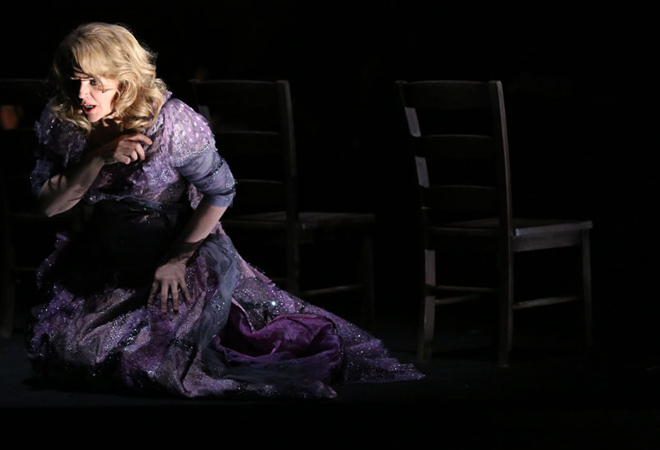 Superstar opera singer Renée Fleming tells us what it’s like to sing for rowdy football fans and seasoned operagoers in the same year. Right now, she’s getting ready to star as Blanche DuBois in the L.A. Opera’s contemporary production of A Streetcar Named Desire (May 18, 21, 24).

You recently made history as the first opera singer invited to sing the national anthem at the Super Bowl. How was the experience?
It was unbelievable! It was sort of terrifying and a huge responsibility, but it was totally worth the angst.

How did your preparation for the Super Bowl differ from your preparation for an opera?
In an opera you’ve got three hours to do it; I’m in a foreign language and I’m sharing the stage with a lot of other people. This [the Super Bowl] was an incredibly intense focus for two minutes and it had to be absolutely perfect. I gave up on perfection in opera a long time ago because it’s really hard to get every moment right. But everyone has a proprietary sense about the national anthem, how important it is, how meaningful it is, and I felt the weight of that. I also felt the weight of being the first opera singer to do it.

Was it very different singing through a microphone in front of millions of people as opposed to your typical performance in a concert hall?
I’ve sung with microphones before (I started as a jazz singer), but that’s not the same as being in a stadium where there is a tremendous echo. You not only have your own voice echoing, you also have the noise of the crowd. They were exclaiming together for reasons I didn’t at the time know. It was because of what was being shown on the screen: shots of Afghanistan. That can be a little bit of a surprise, but we had rehearsed and there was a lot that I was ready for. There were over 110 million people watching; there’s no way to compare to that number. Our running joke was if you added up the audiences I’ve had in my entire career, it wouldn’t even be that many. In an opera house, even at its biggest, it’s four thousand people. It just doesn’t compare.

What was it like performing for football fans?
As an opera singer you’re always sure someone sang your piece better 300 years ago, whereas football fans are not going to have that same yardstick. They care about the national anthem and they want it to be perfect.

Do you think your appearance at the Super Bowl shined more light on opera for average Americans?
That’s the best-case scenario. I actually met someone the other day who told me their neighbor went out and bought two of my CDs. They had never heard of opera before! That’s what I want to hear.

What is the Los Angeles opera scene like?
I am very excited about bringing Streetcar to Los Angeles because it’s a piece I love very much. I’ve done a lot of concerts in L.A., but I haven’t sung opera here in a long time. I’m one of the few New Yorkers who isn’t afraid to say I really love LA. There’s a big competition between L.A. and New York, and New Yorkers always think they have the upper hand, but I think L.A. is beautiful.

How does this performance of A Streetcar Named Desire differ from the stage play?
It’s so different. Opera enables the drama to really increase because the music can create an atmosphere that’s completely over the top. Tennessee Williams’s plays are already operatic. When you add the music and staging it can be very realistic and more evocative.

How did you prepare for your role as Blanche DuBois?
I was afraid to do it at first. There were so many stories about how people who played Blanche had nervous breakdowns because she is so fragile. There’s also something fragile about singing opera, so I wondered how I would marry those two worlds. André Previn (the show’s composer) is the one who makes that happen. The story is still relevant: the inherent sexism, class issues, domestic violence. There are a lot of aspects to the piece that speak to us today. It’s a very layered piece in a very interesting way.

Did Streetcar feel different from operas you’ve performed in the past?
I’m always playing a period role where I’m wearing a huge costume and I’ve got a big wig. I almost never get to do parts that are this contemporary so it’s fun. Even picking up a cigarette is unheard of in any other opera. The whole scene with Stanley is larger than life. There’s so much tension in the music, and the opera can make the extremes and the drama even greater. This production will make a great first opera for many people.