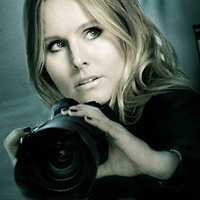 When a project is denied funding, many filmmakers would halt the pursuit. For Kristen Bell and writer Rob Thomas, the lack of financial backing for a Veronica Mars feature film was a minor glitch. They launched a Kickstarter campaign, and fans of the series pledged their money to make the movie a reality—in record amounts. The movie raked in $5.7 million in donations in just one month, making it Kickstarter’s most successful movie fundraising campaign.

In our March issue (on newsstands now!), we caught up with Kristen to get the score on the film’s production. Here, she gives us even more scoop. The movie comes out on March 14, but you can catch Kristen discussing both the TV series and the feature film at PaleyFest 2014.

What was your reaction when you discovered that fans had donated $5.7 million?
There were a lot of nerves leading up to the Kickstarter launch. We worked hard to give  people a reason to become passionate about the show again. We thought we had done a good job putting in rewards such as “come be an extra in the movie” and “come to the premiere.” Basically, we wanted the fans to share the experience as opposed to just getting a T-shirt. We worked really hard but were absolutely floored by the amount of passion and how quickly it was shown.

Why do you think fans of Veronica Mars are still so fiercely loyal seven years after the show ended?
Rob Thomas is a really relatable and talented writer. The people he assembled were perfect for their parts, and Veronica is an underdog. The show speaks to anyone who feels like an underdog and that’s a pretty universal feeling. Rather than the show being about a lot of high-class problems it’s about rejection and people who come together to feel good again.

Since the movie was primarily crowd funded, how did that affect creative decisions? As a producer, did you take on a more creative role?
I have the ability to give input whenever I want, but I rarely, if ever, challenge or even discuss one of Rob Thomas’s ideas. He’s very collaborative; we tend to be on the same page. Every decision in the movie was based on the money that we had raised. Toward the end of our Kickstarter experience, Rob and I had tweeted out the reality, which was that if we can get it to this number, we can have this amount of production value. A smaller budget movie can’t hire a fight choreographer, can’t have sprinklers go off in a scene because you need the special effects guys to install them and clean-up crews. Every hundred dollars we went up, we added something to the film. Every single dollar was put on screen. Every single person did this for no money because they wanted to be there.  It was a unifying vibe. Everybody was passionate about the project, which made it a really fun place to work.

How will the movie differ from the TV series?
It’s more grown up. Initially Rob was racking his brain to figure out how to bring all the characters together again. It just so happened that it was falling around the 10th anniversary of the show so he made it a 10-year reunion. Most of the character’s lives have changed. They’ve evolved and they might have become better or worse people. It’s the same tone and the same quality as the series, which was possible because we hired all the same people from the series. We had the same editor, the same producers, and everyone that played an active role in the series played an active role on the movie.

As an actor, what was it like to step back into a role you hadn’t been in for awhile?
I was nervous to find out if I’d still know her [Veronica Mars]. Sometimes acting feels like work when you’re playing a new character and you want to make sure you do it right. Then you fall into this kind of rhythm. It becomes like a second part of you and you click in very easily. I had that at the end of the series, but I was worried that I couldn’t find it again. It was maybe half way through the first scene where I was gazing into Jason Dohring’s eyes and it felt like it used to. I felt like the old Veronica. It was wonderful.

In the movie, Veronica Mars is now an adult. Did this change how you approached the character?
It was actually easier this time around. Before, I was I was 24-years-old playing a 16-year-old. I was erasing 8 years of development to play a girl who was struggling in high school. I just had my 10-year high school reunion so I’m very much in the same emotional state as Veronica in the movie. I certainly don’t have the drama in my life that she does, but it was almost easier to play Veronica as an adult because she’s so similar to who I am now.

Now that filming for the movie is complete, do you think it will provide closure for fans?
No, I think there will always be more, and I hope people will always want more. If there’s one thing I know about Rob Thomas it’s that he never closes up a storyline. This movie is left very open-ended because we’d all love to work together again. This is one of the best jobs I’ve ever had in my life and as long as there’s an audience for it, I would continue to do it.

If you were to do a sequel to the movie, would you try to crowdfund it as well?
I had a great experience, but I think that I would like the studio system to step in. We needed to prove that there was an audience and that it was still relevant. That’s been proven so I would rather it go through the studio system getting funded as opposed to having to ask fans again. They stepped up to the plate by putting their hard earned money on the table. Nothing is more flattering, but I’d like to be able to do it without their help next time. I’d like to give that gift back to them.

To read Kristen’s “Off The Cuff” quote about the Veronica Mars film, pick up a copy of the March issue on newsstands or subscribe now