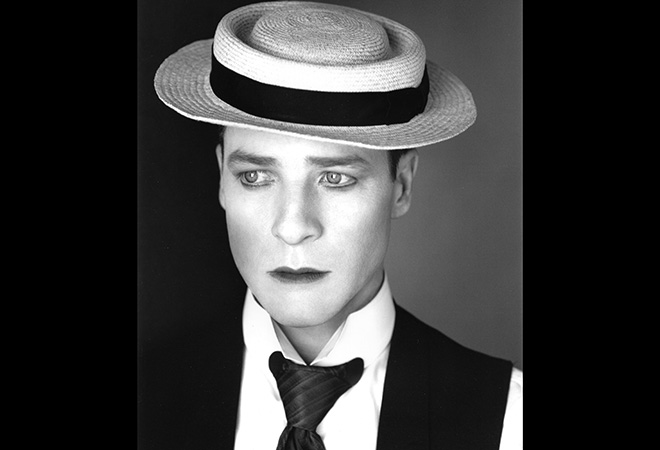 Originally written by French Stewart’s wife as a birthday present, Stoneface: The Rise and Fall of Buster Keaton is part silent play, part gag-centric comedy, and part harrowing chronicle of the ups and downs of the comedian and movie star’s life. In our June issue (on newsstands now), we got a glimpse into the production; Here, we caught up with Stewart to discuss his passion for portraying Keaton and how he prepared for such a physically demanding role. The production will be staged at the Pasadena Playhouse from June 3 to 29.

The title of the play suggests that both the good and bad parts of Keaton’s life are covered.
It’s the best and the worst. We tried to cover everything and be fair to him at the same time. The story is being told through Buster Keaton’s drunk perspective. There will always be people who complain, but all his solid fans, the Buster Keaton societies, and his family have understood what was going on. They felt like it was true to him.

Do you feel any pressure to live up to the expectations people have for such an iconic figure?
It’s very difficult because you suddenly realize that everybody is a Buster Keaton fan, and they all know more about it than you do. They want to tell you the way it really was and everybody’s got an opinion At the same time, if you want to write your own play, go write you own Buster Keaton play!

We’ve gotten very close with his family. They’ve all come out and they’ve been very supportive. We’re frustrated that his story wasn’t ever told in any sort of factual way. There’s been a couple of bad movies. I think his family was just really thrilled because it’s a fair portrayal of him. It’s not just the fun stuff, it’s also the hard stuff.

How did you prepare to play a character nicknamed “Stoneface” because of his stoic expression?
It’s hard because most of what I do in my career is “mugging,” so this play gives me an opportunity to take my face out of it and let my mouth do the work. It’s a ton harder because it’s trying to allow people to see how you feel without an expression. Your face becomes a mask and you’re trying to get stuff across with your eyes. It’s fun once you get that.

What are the challenges of acting in a production with significant amounts of silent scenes?
It’s a real physical marathon! We recreate certain bits of his to tell a story. There’s a reason why he’s the greatest physical comedian ever; it’s really hard to do. It is physically punishing, so we had to pick the ones that I could do well and realize that I’m not Buster Keaton and never will be. The closest thing to him is probably Jackie Chan.

How did you prepare for the physical aspect of the role?
You’ve got to get in really good shape. Doing two shows a weekend really gets you banged up! All you can do is be as physically ready as you can and be mentally tough and suck it up. It’s going to hurt.

What’s your favorite Buster Keaton gag that you perform in the play?
He did this thing where he stands in one spot and they drop a house over him and he lands through a window. He is untouched, but a house has completely fallen down over him. We do that in the show. When we were at Sacred Fools we did it 66 times. It’s truly dangerous because if I don’t hit my mark, it’s going to pound me into the ground. We wanted physical and emotional risk, and we feel like we’ve achieved that.

The play is written by your wife, Vanessa Claire Stewart. Is an interest in the work of Buster Keaton something you both shared?
I met her when she had written Louis & Keely Live at the Sahara, and I was doing a play with Matthew Modine at the Geffen. We struck up a green room romance. I’ve always told her that I wanted to play Buster Keaton, but I felt like I had missed my prime of being young enough to do that. She said, “Well you could just play the middle drunk part of his life!”

She gave it to me as a birthday gift. She handed over a play, and I sat there and read it from page one until the end. It was beautiful; it was exactly what I wanted. It’s been really lovely to have this creative road trip with her and to do the play in Pasadena because I was an usher there when I was 19 and I went to the American Academy of Dramatic Arts there. It’s such a California story, so it’s very special.

Did she know anything about Buster Keaton before she wrote it?
No, she just did it for me. Once she started researching, she said, “Wow, this guy’s life is interesting from cradle to grave.” She got on board with it.

What is it about the life of Keaton that interests you?
It’s the idea that he was like a child star, he was like Michael Jackson. He traveled with his family and they did these tent shows. That’s how he started. He had a skit he used to do with his father called “The Human Mop” where he would go limp and his dad would just throw him around. It was pretty much child abuse. But back in the day, it wasn’t. He was an entertainer from the time he started until he passed away.

What do you think audiences in 2014 know and don’t know about Buster Keaton?
I think they know “Stoneface,” the guy who got laughs with his deadpan. My hope is that we are reintroducing him. Everyone seems to have this awareness of Charlie Chaplin because he was a really good businessman while Buster Keaton wasn’t. I’m hoping that the people who are aware of him get a reminder of how great he was and that other people get introduced to the greatest physical comedian of all time.

To read more from French Stewart, pick up a copy of our June issue on newsstands or subscribe now!