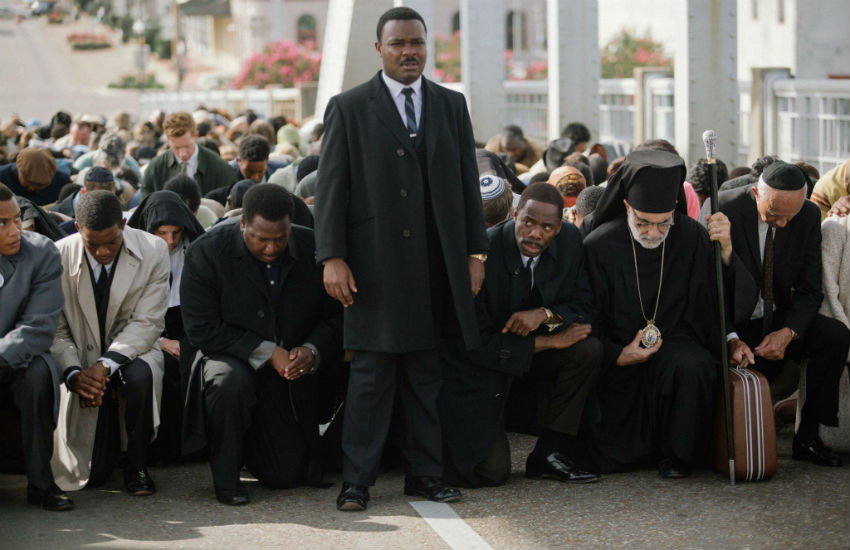 It wouldn’t be accurate to call Ava DuVernay a late bloomer. Upon graduating from UCLA with a degree in English and African American studies, she began working in movie publicity and at age 27 founded a successful PR firm. Thirteen years of observing directors, both on set and and off, inspired her to start making movies of her own. She was 33 when she directed her first film. Since releasing her first narrative feature only four years ago she’s been on a hot streak.

DuVernay’s previous film had a budget of $200,000; her latest production, Selma, comes in at $20 million. The movie, which stars David Oyelowo as Martin Luther King Jr., opened on Christmas Day, but it generated praise, award nominations, and plenty of attention in advance of its release for its undeniable connections to the protests surrounding Ferguson.

You originated your other projects but not this one. Tell me about the differences.
It was definitely different, but I was able to jump into it pretty quickly because of my personal connection to the material. My father is from Lowndes County, Alabama, which is where Selma and Montgomery are located. Growing up I spent Christmases and summers in that very place. My father and mother now live in Montgomery along with all my siblings, so it’s kind of like my second hometown. My mother works in Selma. I was able to get into the idea of this place and from there try to find my way into the character of King.

You’ve said that you feel like Dr. King is often reduced to a statue and speech. What do you think is missing?
What’s been lost in modern day depictions of him is his life, who he really was. You ask most Americans what they know about him and they’ll say “I have a dream” and that he was assassinated. That is a reduction of a great man’s life and his career as a freedom fighter, and that is kind of unacceptable. But that is the lesson plan. No one is paying attention to the complexities of his strategy and philosophy or to how they changed over his 13 years in public life. When you make a man a myth, you lose the real lesson of his life.

My way in was to tell the story of an ordinary man who did some extraordinary things. A black man from Atlanta. The son of a preacher who was the son of a preacher. He talks in his writings about trying to find his way in the family traditions and it not quite being what his father and grandfather wanted. And marrying Coretta. They grew to love each other but it wasn’t a love at first sight thing. Anyone’s life is fascinating when you look. The challenge is that we don’t look closely enough.

When it comes to the events in Selma, what do you think people don’t know?
I don’t think people even know what happened there. Ask people of all walks of life—white, black, old, young. Older people may remember it because they watched it happen, but most people my age, in their 40s on down, don’t have a real sense of it. If they have any idea, they know it’s something about marching. We’re uninformed about all kinds of things not just the civil rights movement.

When they think of the civil rights movement, most people think of the March on Washington. They don’t think of this battle in Selma, which was very action-oriented. Selma was specifically for one agenda: voting rights for black folks. It was attempted three times and King encountered more violence and death in three months of the Selma campaign than in any initiative he had been involved with.

At what point did you decide to go from PR to filmmaker?
I was on the set of Michael Mann’s Collateral. They were shooting in East L.A., a neighborhood I knew. He tells L.A. stories very elegantly and with a lot of detail but it was certainly a different story than I would tell on that particular street. That got me thinking about telling my own stories and using film as a medium for that.

On a Christmas vacation I dabbled and made a short film. A few months later I started working on [This Is The Life], a documentary about the music scene in L.A. It did well on the festival circuit and that got me the notice of BET. They asked if I would do a documentary for them. From there I decided it was time to make a narrative [I Will Follow]. That did well so I was off and running. I made a couple more docuentaries for television and I did some fashion shorts. Then I made my second feature Middle Of Nowhere.

What was it like going from the budget on Middle Of Nowhere to the budget on Selma?
I thought I’d have everything I wanted and be eating bon bons on set. It’s the indie filmmaker’s dream of what $20 million looks like. But $20 million for a historical drama with marches and thousands of people is not a lot of money. It’s basically an indie budget in the studio world. So it was the same feeling of how do we make this work without all the resources that we might want. You never have everything you want.

It sounds like you were prepared for that from your earlier films.
I think that was one of the reasons why I was asked to do it. The film had been kicking around for seven years. There had been a number of different directors attached: Michael Mann, Stephen Frears, Paul Haggis, Spike Lee, Lee Daniels. I don’t know why those gentlemen didn’t end up making it, but I did hear that budget was an issue. Maybe they figured let’s get someone who will welcome $20 million not scoff at it. I’m not crazy; I knew it was low. But I also know that I work with low. My rewrite and vision of the script dovetailed with a budget of that size. I was a lot less interested in the White House and Johnson’s political machinations; I was interested in the people who initiated the march in Selma. Redirecting the narrative allowed us to tell the story in a way that didn’t cost $40 million.

There was this whole myth around King that he was just this soldier who stood alone, but he had a formidable group of leaders around him, all of whom could have been the one. They were brilliant strategists and organizers, but they all fell in line to support one voice. It was important for me to make sure they were all in the mix.

It was also important to me in my rewrite that Mrs. King, who had been on the periphery before, and the other black women of the movement not be rendered invisible.

What were the pitfalls for you to avoid in this film?
There are many historical dramas that feel like medicine—white, black or otherwise. I’m not running to the theater to see them. Until very recently most of them were told from a white perspective and with a white protagonist. In civil rights films you don’t see the aggression, the terrorism of the human spirit and the body, the daily grind of humiliation, and the sheer danger. At any point the police could kill you and walk away, and there was nothing you could do about it. Those are things that I think have been missing from contemporary approaches to these stories. We’re trying to do a lot of things in the film, but it was important for me to have points where you can feel why people were marching, feel why marching was a radical act. Black churches were places of radical thought and it was a risk to walk into them, sit there, and listen to someone preach then go to work the next day.

What was the biggest challenge of shooting Selma?
The film is filled with violence against the black body. It was all we did every day. That was difficult to do for 32 days. Being on the bridge and doing Bloody Sunday with hoses and tear gas and a quadrillion extras was logistically challenging, but in terms of emotionally challenging, every single day was emotionally challenging. There were multiple murders in it. There are only so many times you can direct someone to yell the n-word at someone else and hit them with a baton and not feel that.

Do you think the recent events in Ferguson and St. Louis will change the way the film resonates?
I hope so. It certainly changed the way I’m looking at the material.The parallels are uncanny. The same issues are echoing through history in a way that’s really alarming. Ferguson is not new, and Selma is not old. It’s the same thing happening that happened 50 years ago.

There’s no way you can watch Selma and not think of Ferguson because the whole country just participated in a Selma. It’s not about Mike Brown’s killing; black men are killed every single day around the country by cops. In this particular small town the daily terrorism of the police presence and the lack of voice came to a boiling point. That’s what happened in Selma as well. The difference is that Selma had King. And we’re in a time 50 years later where the question is: Do you need a King? Or is it more community-based and social media-driven so that leaders are obsolete? Or have we made them obsolete at our own peril?

There are lots of interesting questions but the backdrop of the conversation is very similar. My real hope for the film is that it will be a conversation piece that elongates a noble history of resistance from marginalized people. There’s no hero at the end but ourselves. There’s no one rising to save the day. It’s real people doing real work and it’s ongoing. That’s my goal for the piece.