Home Uncategorized Q&A: Dave Stewart Explains How He Became the Ringmaster of His Own... 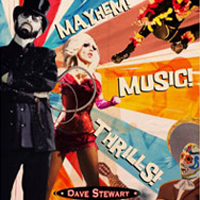 This Friday Dave Stewart, Eurythmics cofounder and a producer, songwriter, and guitarist, will become the ultimate rock and roll circus ringmaster. Stewart joined forces with Rita D’Albert, who cofounded Lucha VaVOOM, to create a show show will include solo material, as well as Eurythymic classsics interpreted by the popular cast, for what is being billed as a night of ‘Mayhem, Music & Thrills’. We speak to Dave about this first of its kind collaboration and what fans can expect.

How did this collaboration between you and Rita D’Albert come about?
I starred in an internet TV show called The Ringmaster, and I asked Nick Starter, who works with me, if he knew anyone who could bring a crazy sensibility and a circus vibe with performers to the show. He said, ‘Oh, you should meet Rita D’Albert from Lucha VaVoom.’ We got on really well and she sort of became my co-host on the show. We came up with this epic video for “Every Single Night,” the first video to be recorded in 11.1 surround sound and shot in 4K, it stars some of the Lucha cast. We had so much fun with that, we started talking about marrying a rock and roll show with elements of Lucha VaVoom. So we booked the El Rey and right after, Annie wanted to reunite and perform as Eurythmics for The Beatles 50th anniversary celebration, so we had to move the date from January to March. It’s going to be one big fantasmic experiment.

What will the format be? Lucha is usually done in a ring setting.
I will be performing with a full band. I’ll be playing my songs, Eurythmic songs, and songs done by other people. It would be too difficult for the audience to see the show in a ring format in this particular venue, so we will have podiums and other ways of incorporating the surprises that will keep the audience entertained.

Lucha VaVOOM recently incorporated Peaches as an opening act, which was a new thing for them.
That’s right! I was thinking that instead of saying this show is outside the box, it’s outside the ring. Everyone sees rock shows, but it’s rare you get things fused together and thought out in this way. It will be a full assault on all the senses.

You mentioned the recent Eurythmics reunion. It’s the first time you have played together in years. Any additional plans for projects or performances?
We never talked about it because the events leading up to that show were hectic. Annie flew in and had to deal with jet lag and then we went right in to rehearsing for the show. It was quite frantic. I did agree to do three nights at the Hollywood Bowl in relation to The Beatles anniversary shows. You never can tell; it’s one of those things that pop up out of the blue. I’m sure there will be other things that come up out of the blue. It was great fun.