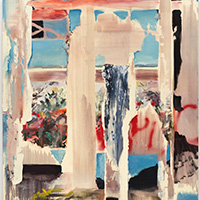 When confronted with one of L.A.-based artist Annie Lapin’s paintings, viewers are often struck by a strange sense of recognition. It’s not so much the abstract nature of Lapin’s paintings as it is her haunting style. The works linger on the cusp of revealing figures or landscapes but never do, leaving the viewer in a limbo between reality and dreams.

Born in Washington, D.C., Lapin spent her formative years in Kentucky before heading west to study at UCLA, where she received her MFA in 2007. Her new exhibition, Various Peep Shows, runs at Honor Fraser through February 22. We spoke with Lapin about her art, guiding talismans, and the nature of human perception.

How did you discover your artistic talent?
I don’t really think talent pushes people into this field. It’s a question of gravity and peripherally it’s about lifestyle. I was a sensitive mess throughout my childhood. Making things was always a part of my daily existence and was probably a gateway to that ecstatic, oceanic feeling of limitlessness that I loved to feel as a kid. The moment of discovery happened when I realized that all the ideas, impulses, and anxieties that had been tangling up in my mind my whole life could be addressed through my artwork.

When was that?
That happened in my twenties. I also figured out that I much preferred to be alone most of the day spending hours in a certain part of my brain that turns on when I’m making work. The need to live that way compels the work forward too.

You studied archeology in college. Does that inform your work?
It was an outgrowth of the same impulse that drives my work. I’m drawn to artifacts as a record of cultural movements, mental spaces, and the physical activity of the human hand. I’m drawn to painting for the same reasons.

Who are your influences?
Influence may not be the right term but I think about a lot of contemporary Los Angeles painters such as David Korty, Mark Bradford, Rebecca Morris, Michael Dopp, Allison Miller, Caitlin Lonegan, Sarah Cain, Analia Saban, Laura Owens, and a bunch of people with whom I share a studio building whose work I see through cracked doors everyday. Mindy Shapero, Molly Larkey, Anne McCadden, Alison Blickle, Jeni Spota, John Bauer. Influences, or positions to bounce off of, are everywhere. I’m a little ADD that way.

What’s your process like?
I go through periods of totally weird experimentation that I’ll never show anyone. This is how my “making” mind catches up to my “idea” mind. My idea mind is always rushing ahead. For example, I’m thinking about things I want to explore right now that I have no idea how to make or integrate into my practice but after six months of working in the studio, those things will start to show up in ways I didn’t expect. But my “idea” mind will already be working on to the next thing.

Do you have an image in mind when you begin a painting?
A half-baked one.

What is the story behind Various Peep Shows?
While the show operates on a variety of levels, in the title I wanted to label the show according to the way it operates on the most basic “base” level. I don’t fully understand the magnetism certain paintings have upon the viewer, so it seemed as reasonable as anything else to draw a parallel between the scopophilic urge to watch porn and the equally mysterious enjoyment of pure looking. These paintings emphasize various looking acts and movements, which is why all of the titles turn prepositions into noun subjects; through-ness, at-ness and in-ness are all positions in these paintings for the viewer to linger on and repeat, and project themselves upon.

Your work often gives the impression of presenting something real that is then obscured right to the point where it becomes abstract. Does your work say something about human perception?
It’s ALL about human perception! It’s not “saying” something, but the whole project is definitely a result of my own fetishization of perception, wanting to create images that unravel that process, underscoring the simultaneously absurd and beautiful mechanics of meaning creation. The painting is an artifact of that process, and for me it is also a talisman to it. Oh, and since I just used the word talisman, I might as well explain that the contemplation of perception, the construction of meaning, and cultural movements tends to give me that “oceanic feeling”—the same feeling that leads people to make talismans to gods. So that’s what I mean when I say “talisman.”

You said in a recent interview that you’re “interested in that moment of self-awareness when our minds create meaning.”
Well, it’s a pretty tall order but the boundary between meaning and nonsense is pretty thin.

What do you mean?
There are moments when we can watch ourselves cross that boundary, like when, for example we can hear English as just a collection of sounds, or we see a color before we can categorize it as red, yellow or blue. Something in that moment seems very important to me. It may be a pipe dream to think that painting can unlock that moment, but I also like the idea that a physical, static thing might be a gateway (as opposed to an environment, or something like a video or a novel that unfolds over time, or, unrelatedly, a drug). I like the idea that you can carry it with you, stare into it like a crystal and go there.

Looking at your paintings, there are hints of classic landscape painting under the layers of distortion. Are you very aware of the art that has come before your own in your work?
In my mind the wider history of any type of artifact is like this cloud of non-physical material that shapes one’s experience of the object as much as its actual physical material. As I imagine it, this “history cloud” is latent in the mind of the viewer, and of course dependent upon his or her own past experiences with that type of thing. An object like a painting, which has little use value and tons of cultural value, has a thicker historical vapor with a greater affect upon our experience of that object. Because of the way I imagine the painting artifact, I make it a point to be aware of that latent historical material, and while I see that material as a kind of ether floating around the work, sometimes it comes very overtly to the surface of the work.

What plans do you have for 2014?
I have a few group shows coming up and an exhibition in Naples at the end of the year. I’m really excited to take my time in the studio, with fewer deadlines than last year.