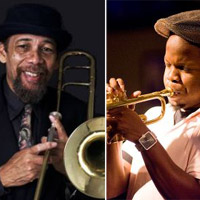 With tonight’s opening concert at LACMA, the Angel City Jazz Festival celebrates its fifth year of proudly nonprofit status: The musicians make the money, the promoters don’t. So far, it’s worked. Through consistent vision, a diverse booking palette, and intriguing themes (this year: “Artists & Legends”), the festival has evolved into a tentpole showcase for the Left Coast/LoCal jazz scene. This year’s top-shelf offerings include: trumpeter and recent Thelonious Monk Competition winner Ambrose Akinmusire, a live soundtrack to a documentary about the Mississippi Delta by versatile guitarist Bill Frisell, the first L.A. appearance in 26 years of protean, controversial New York saxophonist Archie Shepp, and, wunderkind pianist Vijay Iyer performing with one of his free-jazz mentors, the equally unpredictable saxophonist Steve Coleman.

We checked in with the festival’s multi-talented co-organizers: musician/composer/label owner Jeff Gauthier and vocalist/promoter Ruth Price, a local legend who ran Culver City’s music mecca The Jazz Bakery from 1997 to 2009 and recently scored the mother of all coups when renowned architect Frank Gehry agreed to build her a new club next to Culver City’s Kirk Douglas Theatre – for free.

How did this joint collaboration between the festival and the Jazz Bakery come about?
Ruth Price: Two years ago, I did a performance at the Musician’s Institute in Hollywood with the guitarist John Abercrombie that was designated as one of the official ACJF performances. At that time, the Jazz Bakery hadn’t yet gotten to the point where we decided if we needed an Artistic Director. We’d never had one before and we vetted several good people, but Jeff seemed like the perfect fit. It was a natural progress because we are both doing things that complement each other.

Jeff Gauthier: Next year it’s looking like the Jazz Bakery will be involved again and we’ll be looking to Ruth again to take on a bigger role. Also, the collaboration with the Jazz Bakery makes sense, because we can introduce their audience to the festival and vice versa.

RP: The festival’s original organizer, Rocco Somazzi, and I are very excited about the concept of basing the festival around that wonderful jazz documentary Icons Among Us: Jazz in the Present Tense. I’m pretty friendly with the producer/director of that, and we’re in discussions.

How did you decide on the theme for this year, “Artists & Legends”?
JG: At last year’s festival, [drummer] Alex Cline presented a piece by [saxophonist] Roscoe Mitchell at REDCAT with a large ensemble on the same bill as Roscoe’s trio. The idea of having an artist do an homage to a legendary artist on the same program is a very moving experience, and we saw that Roscoe was quite touched by it as well. So we took that idea and expanded it for the entire festival.

How did you pair up the acts?
JG: We worked at it from both ends. We knew we wanted to do something with [cornetist] Bobby Bradford, so we immediately thought of Mark Dresser because Mark is someone who cut his teeth with Bobby when Bobby taught at Pomona College [back in the early ‘70s]. He has a fondness and a lot of respect for Bobby. With Myra Melford, her choice was her influence, Marilyn Crispell. The idea of Marilyn doing some solo piano and then both of them doing “Piano Four Hands,” which is something they’ve done before, followed by Myra’s new band Snowy Egret is really exciting.

Ruth, besides curating one show for this year’s ACJF with guitarist Anthony Wilson, you were also were involved in the festival’s Young Artist Competition.
RP: Yes, I was one of the five judges for that. I hear about various young players around town because for years the Jazz Bakery was the go-to place for all of the local college and high school bands – not big bands, but jazz combos – and it was so exciting when we had them play. Whenever there was something that attracted the young crowd, there was always an electricity in the room. I just loved it.

Jeff, this is the second year the festival has run a Kickstarter campaign. What is the goal this year?
JG: It’s to document the Ford Theatre concert on the 7th with Archie Shepp, Bobby and Mark, Ambrose Akinmusire and Peter and Damian Erskine with Vardan Ovsepian. It was originally going to be videotaped by KCET like it was last year, but they had to back out because of funding cuts. We decided we needed to find a way to document this. I should also mention that the recording of last year’s Roscoe Mitchell concert will be available at the festival and for a short time online during the festival.

Any news on the new Jazz Bakery space?
RP: My way of explaining it is “the shovel is ready to go into the ground” in terms of the design and the lot that was given us. We have to raise a lot more money. We’re about to go into a major campaign for the real funding. Even though we had substantial funding [$2 million] from the Annenburg Foundation, but building a building is a whole different ball game. It gets into true fundraising and that’s no small thing. Hopefully, the paperwork could be finalized by January.

Frank Gehry is designing it. Can you describe how it looks?
RP: What can I say? It’s Frank Gehry! We’re going to use it as our big thrust, to put the design out there to the public when we start campaigning and fundraising.

Jeff, since you were trained as a classical musician, how do you approach the “Honoring and Breaking with Lineage” subject in the realm of jazz and creative music?
JG: At this point, I basically have to trust that all of my influences and lineages have been fully assimilated into what I do. [Laughs] Back in the day when I was studying at Cal Arts and had more time to think about it, guys like Bill Evans, Miles Davis, John Coltrane, and Keith Jarrett had a great influence on me. Once in awhile I listen to my old stuff and think, “Oh, I must have been listening to Ralph Towner in those days.” Now, it’s all part of the mix.

What about you, Ruth?
RP: I’m more with the “honoring” than I am with the “breaking.” I don’t think you need to break something in order to continue. What choice do you have? What would you have been building on?

Jeff, this is the first time you haven’t played at the festival. Who would be your legend if you did?
JG: In a way, Ruth Price is a legend in her own right, a legendary jazz singer and legendary producer, club owner and artistic director here in L.A.

RP: I haven’t lived long enough to be a legend! [Laughs]

JG: I think I’d choose [woodwind player] Bennie Maupin. I’ve been a fan of his music since I was in high school when he played in Herbie Hancock’s Mwandishi band and his landmark album The Jewel in the Lotus. In 2004 I put a band together to cover two of the Mwandishi albums and Bennie was in the audience. That was the beginning of a fruitful working relationship during which I was able to help with the production of two of his recordings. I’ve learned a tremendous amount from him about music and life.

RP: Because I’m a singer, I think in terms of piano players and rhythm sections. I loooove Robert Glasper. Because I haven’t been singing in so long, people forget that I’m open to adventure. Some of the first gigs I had on the road were with Charles Mingus and Jackie McLean! But Robert is so free. One of my favorite things I produced for the Jazz Bakery last year was Robert’s trio with Derrick Hodge on bass and Chris Dave on drums. They did an entirely improvised night, from first note to last. I was in the dressing room listening to it. It was amazing, incredible, brilliant and I’ll never forget it.

Read the full interview with Jeff Gauthier and Ruth Price at StompBeast.