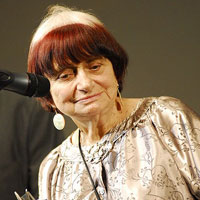 Before the French New Wave, there was Agnès Varda. The filmmaker created a visual language that merged documentary style with imaginative camera work. Exploring feminist and realist themes since the 1950s, she deftly mixes playful elements with profound metaphors. LACMA’s new exhibition Agnès Varda in Californialand, which opens on November 3, focuses on the works that she created during her stints in California in the 1960s and 1980s. During those periods, she made films about the Black Panthers in Oakland (Black Panthers), the hippies of Sausalito (Uncle Yanco), Los Angeles street artists (Mur Murs), and a single mom in Venice Beach (Documenteur, an Emotion Picture). In addition to screening her films, the exhibition will display Varda’s specially designed structure, My Shack of Cinema (1968-2013), alongside her sculptural and visual art.

The 85-year-old director will be present at a few of the screenings. Tonight at 7:30 p.m., LACMA screens The Gleaners and I, her 2000 documentary that focuses on artists who make works from recycled material. It will be followed by a discussion with Varda and a screening of the sequel, The Gleaners and I: Two Years Later. The next few days will see screenings of her other films a restored 35mm print of her 1969 film Lion’s Love (…And Lies), which centers on counterculture characters in the Hollywood Hills, including the cast of Hair.

We caught up with Varda to explore the role of California in her work and to ask about her time living here.

What was your impression of California when you first moved here?
You send me back years ago! I presented my films in L.A. in 1963 and 1965, but I came for good in 1967 with [my husband] Jacques Demy who had signed to do a film with Columbia. I came with curiosity linked to clichés and got caught the first day I drove through Los Angeles. The size of the flat city, the mostly flat city, a dreamlike feeling of never ending (like Pico Avenue or snaky Sunset), the ocean on one side and a typical U.S. skyscraper on the other side, plus a jump in Mexican culture just after visiting the pretentious rich–more than rich–Bel Air residences. Those contrasts excited me. Actually, even if I shot in Oakland and Sausalito, even if I love Frisco, I am a fan of Los Angeles!

Are there distinctive qualities of California that became evident in the way you create films?
Agnes Varda in Californialand is the title of my exhibition at LACMA. My films in that land cover my different approaches and styles as a filmmaker: real documentaries about the L.A. murals or about the Black Panthers, discovery of my real uncle on a boat, a marvellous hippie-daddy, a total fiction shot in a typical Beverly Hills rented house with a pool and a lot of plastic flowers.

I created this fictional love triangle with some figures of the  subculture, Jerry Ragni and Jim Rado, writers and actors of Hair. Plus, Viva the mythical muse of Andy Warhol. Plus, Shirley Clarke, a New Yorker underground filmmaker visiting the Mecca of cinema. Plus, a TV set where the world was appearing and broadcasting political assassination. Yes, the duo sex and politics. Later, I also made a personal and bittersweet fiction in Venice. The local title is An Emotion Picture. So you can see that I covered different and true aspects of the capital of cinema without making a single studio movie.

What would it take for a new generation of filmmakers to be able to create a something akin to the French New Wave in the 21st century?
In the early ‘60s (and I even started earlier) there were French film buffs who wrote and directed their films with new attitudes: looking for natural locations, a lot of scenes of characters walking in the streets, direct and sometimes bad sound, daring editing, young composers. The film scene was dull at the time and few foreign productions besides the U.S. and Italy.

So there was room to invade the film screens and meet new audiences. It is interesting to notice how many new talents bloomed in five years: Godard, Truffaut, Demy, Chabrol, Resnais, Marker, Rouch… and me, then Rohmer and Rivette and so on. In the 21st century, there are many very good filmmakers, but competition is fierce. They come from all countries of the world. They are more and more. It is difficult to identify a group or an organized movement.

Now that anyone with an iPhone can shoot a video, how will it affect the way people create and distribute artistic films? What filmmakers are you interested in today?
The scene has totally changed. All the technic inventions have a democratic effect: to give everybody the possibility of taking pictures, filming here and there, editing and so on. Filmmakers with artistic or commercial ambitions (or both) use the new possibilities to create something. Like before, there are different levels of making films. I still prefer auteurs like the late Cassavetes and Fassbinder and more recently Gus Van Sant, Woody Allen, David Lynch, Jarmusch, the Coens but also Jia Zhangke, Abbas Kiarostami, Tsai Ming Liang, Carlos Reygadas and in France, Philippe Garrel, the late Demy and Maurice Pialat, and now Abdellatif Kechiche.

Some filmmakers and/or photographers have turned into visual artists. That’s what happened to me. Ten years ago, I started installations mixing films and videos and placing them in space instead of on the flat screen. It creates other relationships with the viewers, other possibilities to express discoveries and emotions. I will have that exhibition at LACMA in November. Memories have a new form, a new shape. I even built a big shack, come and have a look! Photographs or moving images, texts or film dialogue, it’s all creation and sharing with others.