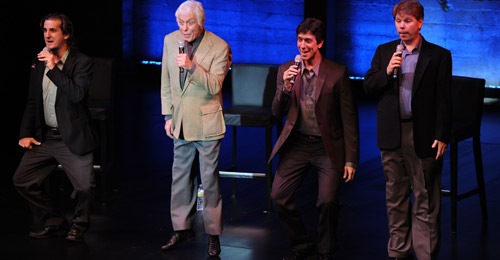 The audience that paid to sees Dick Van Dyke and The Vantastix at the Geffen last Saturday night got their money’s worth—and a fix of nostalgia. “Chitty Chitty Bang Bang,” “Rosie” (Bye Bye Birdie) and “Chim Chimney” (Mary Poppins) were among the numbers that lit up a clap-happy crowd at the sold-out show.

Van Dyke’s acapella quartet, which formed after bassist Mike Mendyke approached the icon at a Starbucks in Malibu a decade ago, performs mostly at benefits; this one raised money for the Geffen and the educational non-profit Determined To Succeed. Much of Van Dyke’s narration during the show (he buffered each diddy with an anecdote or two) addressed his age. “I am…what’s left of Dick Van Dyke,” he joked to open the show, flashing shock-white teeth that matched an impressively lush head of hair. He entertained with stories about auditioning for the role of Albert in Bye Bye Birdie and working on The Dick Van Dyke Show with Mary Tyler Moore, whom he doubted at first because of her “Mid-Atlantic, Katherine Hepburn kind of delivery”. “Do you think she can do comedy?” he asked Carl Reiner, the sitcom’s creator, at the time. “That was the first and last time anybody asked that question,” Van Dyke quipped.

Several times during the concert, the entertainer chuckled at his own senility, acting confused about the program schedule and relying on his significantly younger group mates for direction. “He’s so charming!” my friend said during one song. I agreed, though I wondered how improvised his moments of forgetfulness really were. Then Van Dyke genuinely lost his place; he overtly inspected his watch during one song and dance. It was funny, but also kind of sad. In an intentionally melancholy moment, Van-Dyke dedicated the beautiful and evocative “Baby Mine” from Dumbo to his “lady,” little known entertainer Michelle Triola Marvin, who died last year. Van Dyke lovingly remembered how she would barge into his home practices only to announce assuredly that “somebody’s flat.” Again: funny, but also sad.

Most of the show’s tone was lighter, though. With an inimitable pendulum-leg swing, a swift kick-step, and his mellifluous voice, 84-year-old Van Dyke kept up with the Vantastix the whole ninety-minute show. In an instance of maybe-improv, Van Dyke invited a flustered Shirley Jones from the crowd to join the quartet in a rendition from The Music Man. “Tell me when I’m supposed to come in, will you?” she requested before they began.

Between acts, Van Dyke shared how grateful he is for his career. “In my life, I’ve had more fun than the law allows,” he said. Towards the end of the show, Geffen’s producing director Gil Cates (once also the producer of Mother’s Day, the game show that Van Dyke hosted) honored the icon’s career by announcing that one of the theatre’s dressing rooms would be named after him.

The audience walked and wheeled themselves out of the theatre smiling, only to be greeted by champagne, pastries and an ice cream cart with do-it-yourself toppings. Guests in their seventies and eighties were abuzz with talk of ice cream, which flavor to get, which toppings to put on. The whole scene made me want to stay a little while longer.