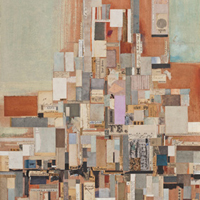 Location: Santa Barbara Museum of Art, through May 6

What to expect: This week the Santa Barbara Museum of Art, the northernmost outpost in the Pacific Standard Time celebration, opens its Pasadena to Santa Barbara exhibit, subtitled A Selected History of Art in Southern California, 1951-1969. The thread tying the various pieces, which take up a significant chunk of the museum’s State Street real estate, into a pretty bow is the legacy of Thomas W. Leavitt, director of the Pasadena Art Museum (soon to become the Norton Simon) from 1957 to 1962, when he decamped to run the Santa Barbara Museum of Art until 1969.

Leavitt either acquired for his institutions or curated exhibits of the artists featured here, a compelling sampling of painters who either worked in or were otherwise informed by L.A. and Santa Barbara. As a sampling rather than a definitive survey, the goosebump moments come unexpectedly: William Brice’s Mottled Things, from the SBMA, paired with his extraordinary Kelp, Rocks and Sand, which normally resides in the Norton Simon. Richard Diebenkorn’s lesser-known paintings on loan from the Santa Cruz Island Foundation, the inspiration for which hovers on the ocean horizon just outside the museum doors. The Sam Francis Upper Yellow  beaming near the sensuous Still Life in Ochre and Red, The Red Stripe, and Man in Gray by Robert Motherwell.

A viewer is likely to acquire new friends. Helen Lundeberg’s extreme abstractions of California light. The ocean-baring Weights of the Pacific by Lee Mullican. Ynez Johnston’s intricate Tiberius Villa. Everything from the hands of Ojai legend Beatrice Wood. They were our favorites, but just a jot of the featured artists who also include John Altoon, Karel Appel, Karl Benjamin, William Dole, Marcel Duchamp, Lyn Foulkes, Philip Guston, Robert Irwin, Ed Kienholz, John McLaughlin, Larry Rivers, Richard Rubens, Mark Tobey, and June Wayne. See a name you admire? What better way to spend a day than in one of California’s most beautiful settings in the company of its artists?

And while you’re there…: See our Weekender guide to Santa Barbara for must-visit stores, restaurants, and more.