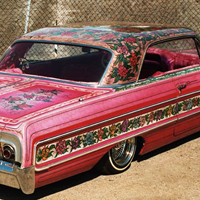 Show: MEX/LA: “Mexican” Modernism(s) in Los Angeles, 1930-1985
Location: Museum of Latin American Art (MOLAA)
Date visited: December 4, 2011
What to Expect: MOLAA has tried hard to make art accessible, even to children. Some of the installations are interactive. My kids loved including their chalkboard and Post-It contributions. However, the subject matter is more somber than festive with works varying from the seemingly benign to the overtly political. Of course, in the Latino art world, everything has sociopolitical undertones, even snacks with “Mexican art” wrappers. Dominating the lobby is Lowrider Godfather Jesse Valadez’s masterpiece Gypsy Rose, a 1964 Chevy Impala that is both visually mesmerizing and powerful enough to strike fear in the streets. It sets the tone for what’s to come. Graciela Iturbide’s image of White Fence cholas waving gang signs—don’t drop the baby, homes—still resonates. Toss in influences of Diego Rivera, religious iconography, and a sexually charged Aztlán for a well-rounded representation of the exhibition.
And while you’re there… : Mix up your cultural intake with a soulful trek to Roscoe’s House of Chicken ‘n Waffles a few blocks south.