Home Uncategorized Pssst… Have You Heard About the Super Secret Comedy Show? 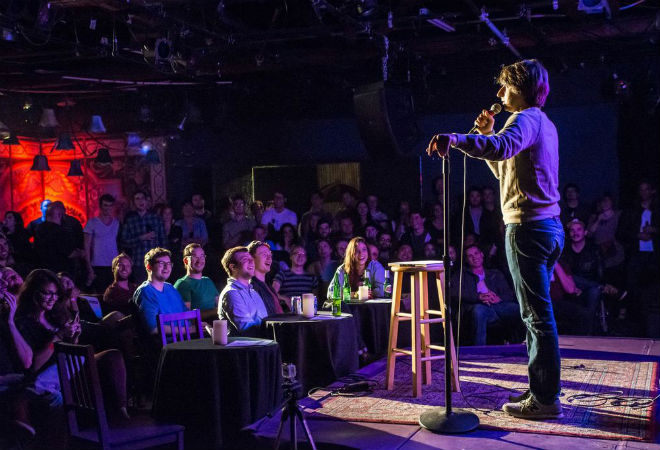 After only a year, L.A.’s Super Secret Comedy Show has become a comedy institution in a town that already has plenty of them. Standup comedian Hunter Hill explains, “I started it as a way to create my own stage time, work with comics I’ve looked up to, and create a show where people don’t have to spend $20 on parking, $30 on a ticket, and buy two drinks.”

What sets Super Secret apart is the relaxed atmosphere and informal ambience. Odds are that after the performances you can have a beer with the comedians you just saw onstage. And you’re likely to spot big time comics on the same bill as burgeoning jokesters. In a town with a diverse and ever-changing array of comedy shows, Super Secret created a space between established venues and the growth layer of up-and-coming performers. That concept has made Hill’s brainchild immensely popular.

In the past year the shows, held two Wednesdays a month at the Lyric Theatre on La Brea, have featured Eric Andre, David Koechner, Anthony Jeselnik, and Iliza Shlesinger (who won in season six of NBC’s Last Comic Standing).

Tonight (Wednesday, March 26), get ready to laugh your face off at the Super Secret Comedy Show‘s first anniversary with Maria Bamford, Taylor Williamson, Matt Braugner and a secret guest that Hill promises will be “super secret.”

Taylor Williamson
Taylor Williamson is an L.A. native who has appeared on The Late Late Show with Craig Ferguson, the Just For Laughs comedy festival in Montreal, and NBC’s Last Comic Standing. Williamson is probably best known for his most recent appearance on America’s Got Talent, where Heidi Klum chewed him out for not being PG enough. The comedian then “tailored” his next set for Klum, cracking jokes about the zoo, pets, and elementary school: “You know how they call it a number two pencil? That’s disgusting.” Williamson went on to win second place in the competition.

Matt Braunger
Chicago-born writer, actor, and comedian Matt Braunger recently appeared as a recurring guest star on the NBC comedy Up All Night with Cristina Applegate and Will Arnett, which was only lasted one season. Braunger, who is known for his celebrity impressions and a stint on MADtv, and also founded the fictional Hangover Airlines, where Gatorade and Chicago-style pizza are complimentary and the company’s jingles informs customers: “Hangover Airlines/Everybody shut your [bleeping] mouth/Shut your mouth on Hangover Airlines/You do not talk! You do not talk!”

Maria Bamford
“I’m trying to bring the tension and anxiety of reality TV shows into my everyday life,” says Maria Bamford. “I gathered all my ex-boyfriends in a room for a rose ceremony.” Bamford is known for her unhinged and emotionally volatile characters. The former Minnesotan has had recurring roles on Arrested Development and Louie, also does voice work on cartoons, and has appeared on The Tonight Show with Jay Leno, Late Night with Conan O’Brien, and The Late Late Show with Craig Ferguson. Bamford’s strength is her painfully honest approach to stand up. Her material is painfully intimate but Bamford’s delivery—she switches seamlessly between storytelling and oneliners—punctures the serious tone with surgical precision.