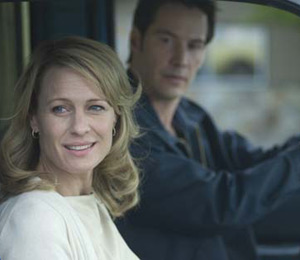 It’s unfair, at best, to project an actor’s personal life onto the characters they play. But as I watched Pippa Lee (Robin Wright Penn) morph from dutiful wife to concerned neighbor to supportive friend to please everyone in her life but herself in Rebecca Miller’s The Private Lives of Pippa Lee, I couldn’t help but reconsider the statement Wright Penn gave to More magazine last August regarding the end of her marriage to Sean Penn: “I know what I don’t want.” It’s the kind of statement that reveals as much as it conceals, the kind of statement Pippa Lee might think but couldn’t utter.

The film, adapted from Miller’s 2008 novel, follows Pippa and her much older husband, Herb (Alan Arkin), as they struggle to settle into life in a Connecticut retirement community. There, Pippa’s existence is so circumscribed that she’s thrilled to find a specialty cheese at the local store. Herb is so unwilling to accept what retirement—what old age—might mean that he insists on working between 10 and 1.

Watching Wright Penn and Arkin volley the loaded, memorable words of Miller’s script is great. Watching Wright Penn slowly expose the layers of Pippa’s long-stifled identity one quiet scene at a time is even better. Blake Lively as a younger Pippa, Keanu Reeves as her sympathetic neighbor, Winona Ryder as her dysfunctional friend, Julianne Moore as a transformative figure from her past, and Maria Bello as her compulsive, drugged-out mom offer as much wry comic relief as they do dramatic support. Together, their lives ask if it is better to feel pain, anguish, guilt, and loss or to go through life half-awake, half-witted, and halfway to the grave. By the end, Pippa has an answer. I think Wright Penn would be proud.