Speaking to an enraptured audience on Sept. 17 at a downtown L.A. park, Trent Reznor, halfway through the stunning Nine Inch Nails headlining set at Primavera Sound Los Angeles, told the crowd, “This night has been a long time coming.”

Heavy fog poured from the stage, cloaking the 57-year-old industrial rock icon and his band in proper mystique. A simple mix of strobe and incandescent lights provided just enough flare to illuminate their stern figures and compliment the industrial alt-rock sound with a display perfectly accenting the rich musical dynamic Reznor has been fine-tuning for 30-plus years.

The crowd, myself included, was hooked from the start. NIN tore through “Somewhat Damaged,” “Wish,” “Heresy,” and “March of the Pigs,” with drums, bass, guitars and synths pleasurably pummeling ears that paid at least $149 to be pummeled. Heads were banging, bodies were swaying, and dedicated fans were shouting back Reznor’s dark, thought-provoking poetry as it left his lips. “Now doesn’t it make you feel better?” It was my first time seeing NIN perform, and to answer the question Reznor sings so tenderly in the chorus of his 1994 lead single off The Downward Spiral, “March of the Pigs:” Yes, Trent—it absolutely does.

The iconic hard rock band—now regularly featuring Reznor’s film scoring partner Atticus Ross, with whom he shares an Oscar for their The Social Network soundtrack—had previously played a Primavera Sound extravaganza in Barcelona in 2014. During the only break from an otherwise relentless set spanning decades of work, Reznor told a sea of people gathered at L.A. State Historic Park that it was a no-brainer to agree to headline the first iteration of the festival in the U.S. “But COVID had other plans,” Reznor added, referring to the two-year wait to finally rock this grand stage, occupied by Lorde in what I hear from my editor was a unique and showy headlining set the previous night and by Arctic Monkeys the next.

I was only there Saturday to enjoy the festivities, which were dominated by distorted guitars, with some hip-hop and EDM scattered throughout an eclectic lineup that didn’t strike my particular fancy but was enjoyable nonetheless. Reznor’s set was the clear highlight, and certainly the most attended, while daytime crowds were sparse and appeared more interested in finding shade rather than a stage to stand in front of.

Upon arrival at 4 p.m., parking was easy to find on Broadway, a street that borders Old Chinatown and the park where the festival was conveniently nestled just a few blocks from a Metro station that no doubt helped reduce traffic. Compared to this year’s Coachella—a festival that cracked down on all types of drug paraphernalia, including legal cannabis—security was a breeze. The comforting scent of herb was wafting through the air at Primavera Sound stages. And I witnessed several heartwarming moments demonstrating the power of pot as the passing of joint united strangers in front of me. After all, we’re not just here to listen to music. The best music festivals harbor a warm, welcoming communal energy, facilitating a connection between people on the ground as well as the artists pouring their hearts out on stage.

Speaking of artists on stage, I’m not here to criticize anyone’s art. Quality is all relative to the soul of the perceiver in this field. But to this unique instrument of perception, some of the artists earlier in the lineup lacked energy and heart, two tools that if wielded properly can create a magnetism that pulls people from the sidelines, quickly alchemizing strangers into fans. I didn’t feel that in myself or sense it happening in motionless crowds of spectators until Fontaines D.C. took the Tecate Alta stage. The size of the audience doubled that of Kim Gordon’s, perhaps because the heat was waning by 6 p.m., drawing attendees out of their coveted shaded spots, or maybe because their brand of rock is a little more melodically accessible to the masses than Gordon’s avant-garde noise roc. Or maybe audiences were just more familiar with their name after regular local radio airplay and a 2021 Grammy nomination for Best Rock Album. Either way, the festival seemed to really start kickin’ by sunset, as more people poured in from the front gate, just in time to start packing the Primavera stage to groove along with Khruangbin. 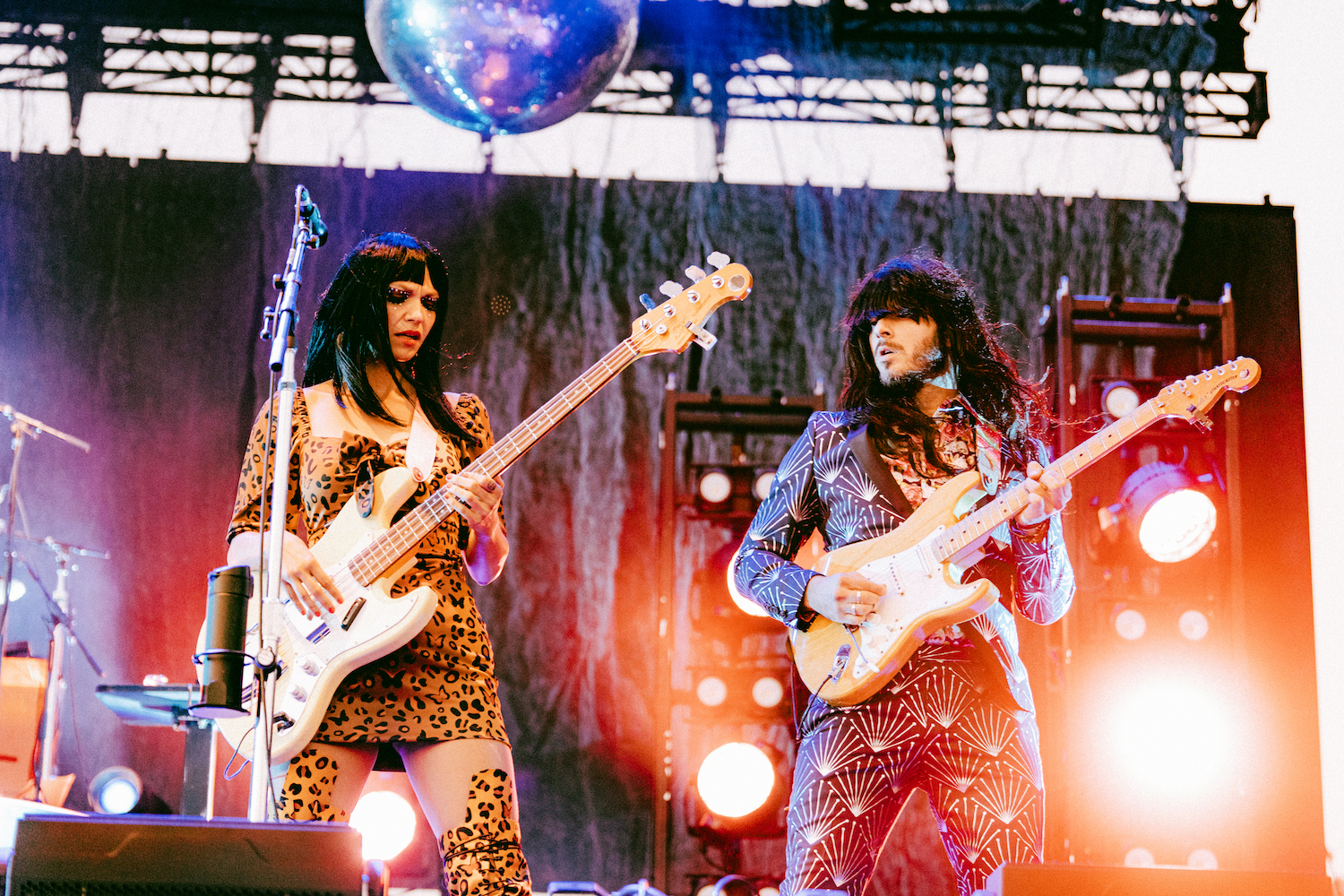 According to the New York Times, the trio from Texas “creates an atmospheric collage of global subgenres, including reggae dub, surf-rock, Southeast Asian funk and Middle Eastern soul.” Sure. I guess that’s what I heard. These ears, however, hunger for catchy melodies, thoughtful lyrics, and soulful vocals cased inside the structure of modern song, so whatever draws people to Khruangbin didn’t quite click, and my legs were carrying me off to Warpaint.

My feet planted in the grass at the Barcelona stage for a few songs, but the antenna that informs my senses wasn’t receiving a very exciting signal, so I strolled back to the Tecate Alta stage, where Surf Curse was bringing a bit more energy, edge and personality to the stage.

Emotive lead singer Nick Rattigan impressively belted lyrics from behind the drum kit while leading the rhythm section, which switched on a dime from melodic surf rock to hardcore screamo, and then back again, creating a rollercoaster of dynamic energy that commands attention and sparks mosh pits. Rattigan was one of the few performers of the night who actually looked like he was having fun and was happy to be there, thereby making him fun to watch. The drums weren’t just his instrument, they were his playground. He even climbed on them and balanced at one point, and eventually left them entirely to jump off the stage into the audience while singing the band’s hit song “Disco.” Meanwhile, lead guitarist Noah Kohl took care of tasty licks that filled the melodic void when Rattigan wasn’t singing. Then they made the crowd surf while playing their biggest hit, “Freaks,” and even had the stones to play a brand new, untested song at one of their biggest festival gigs yet. It was a success. Maybe a future single. Rock on, gentlemen. But now, on to the main course.

Nine Inch Nails delivered one of my favorite rock concert experiences yet, and they’re far from a personal favorite. But Reznor and his collaborators are undeniable masters of their craft, so how could it not be mesmerizing? These eyes and ears marveled at the spectacle as pulsating and complex rhythms took control of my body’s movements, sending my neck into a therapeutic tailspin. I was having a headbanger’s ball as Reznor alchemized mere notes and noises into profound meaning. I didn’t need to be familiar with the material to be in awe of it. Enthralling energy radiated from the first chord to the last, while Reznor’s soul soared through the sound system.

When he sings, I wanna fuck you like an animal/I wanna feel you from the inside, he sings it with all of his heart. My whole existence is flawed. You get me closer to God. Life is relative and framed by duality. Sometimes we need to embrace the darkness to catch the best view of the light, and this is the paradox where Reznor truly shines. God is dead, and no one cares. If there is a hell, I’ll see you there. If a priest walked into the climax of Primavera Sound on Saturday night, he might have considered it hell on earth, but Reznor’s disciples seemed higher than heaven during this 75-minute set, concluding with a string of his most recognizable hits: “The Hand That Feeds,” “Head Like a Hole” and “Hurt.”

An encore couldn’t have hurt, but we didn’t get one, and after such a powerful performance, we didn’t really need one. My back, now sore from six hours on my feet, definitely didn’t need one, either. What have I become? My sweetest friend, everyone I know goes away in the end. And so Nine Inch Nails left us, and then a satisfied army of fans went on their way as well, and my first-ever Primavera Sound adventure came to an end.

It was a wonderful night out in downtown Los Angeles, where skyscrapers sparkled in the distance behind the festival grounds, which were well managed and effectively designed by a team of concert professionals who clearly know what they are doing. The sound was crystal clear without blowing out my eardrums, and the food options were deliciously diverse. Though the park wasn’t packed, it was certainly full of people enjoying Primavera’s first crack at enchanting Angelinos, and there was plenty of room for more to enjoy it in 2023. Was the turnout strong enough to warrant continuing doing it year after year, as they’ve been unfolding in Barcelona for two decades?

According to the company, over 50,000 attendees from 50 different countries came out for the event last weekend, leading Primavera Sound director Alfonso Lanza to declare, “We are thrilled by the response and the welcome that Los Angeles and its public have given us. It has been a challenge, but also an honor, to have transferred the philosophy and the differential factor of a festival created in Barcelona two decades ago to one of the nuclei of the music industry.”

The Softer Side of Nine Inch Nails