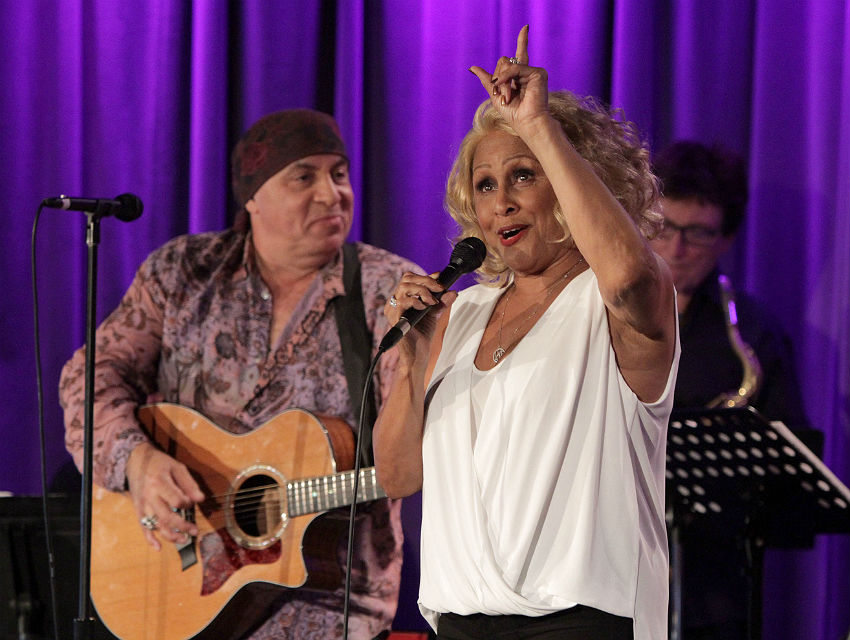 Bette Midler calls Darlene Love “one of the greatest voices in all of pop music.” Though her new CD is called Introducing Darlene Love, it can be argued that Love, who first came to prominence with “He’s a Rebel” in 1962, needs no introduction. She appeared every December on David Letterman’s show to sing her classic song “Christmas (Baby Please Come Home).” She also memorably took to the Oscar stage when 20 Feet From Stardom won the Academy Award for Best Documentary. Love took time between appearances at the Grammy Museum and her shows at Whisky A Go Go (September 18, 20) to talk about the new album, producer Steve Van Zandt, and the 30 years it took to make this record.

Steve Van Zandt recently said it took him 30 years to honor the commitment he made to you to produce this album. What took so long?
So much going on! My career and his career, and Bruce Springsteen is his boss. Bruce said they’d go on tour for a couple months, but it was a couple years. It is just time. I’m the type of person that believes the right time is the time when it happens.

Did it seem like a hollow promise, or did you think this would actually happen?
I did think it would happen. I always felt that after Phil Spector, Steve Van Zandt was probably the only person who could record me and make me sound like the Darlene Love I know and the Darlene Love Stevie loved. I didn’t know it would take this long, but I was willing to wait. It wasn’t like I was bored sitting around for 30 years waiting for him.

Van Zandt said that hearing you sing “Marvelous” at a gig prompted him to say it was time to get in the studio. Can you elaborate?
We were working at B.B. King’s in New York and we did “Marvelous.” That night after the show he said, “What are you doing tomorrow?” I said, “We have a day off.” He said, “No you don’t, you’re coming to the studio.” It was one of the quickest songs we did. The band and I and the singers had been doing it for a long time.

A song called “Last Time” on the album was originally written for Gary “U.S.” Bonds. But it seems like it could be autobiographical for you.
Steve gave me that song when his mother passed and he wanted me to sing it at her funeral. I always loved that song. You can sing it for different reasons. The first time was for his mother. When I sang it for myself, it took on a different meaning. You bring what you are going through in life. Gary Bonds said the same thing. If you are a great singer and have feelings, you can bring different things to a song.

Ronnie Spector work with the E Street Band in 1977. You’ve worked with them, Springsteen, and Van Zandt. What’s the appeal to those of you who came from the Phil Spector era?
Bruce invited me to sing for the 20th Anniversary of the Rock ‘n’ Roll Hall of Fame. Man, does it get any better than this? I told Bruce after I came off stage, “It’s great working with the wall of sound again.” They know that sound. You can hear the voices clearer. You can hear the music clearer. That’s why I could wait for Steve. Most people who’ve heard me in person know how I sound, and that’s what Steven wanted to get.

You appeared on Letterman’s show for 29 years doing “Christmas (Baby Please Come Home).” It took 30 years to get this record out. What does it mean to you that one followed on the heels of the other ending?
I always say there’s nothing new under the sun. As Steve says, the notes are the same. What can you do? Steve put everything but his blood into this one album, and that’s what makes it so great.

Hearing the album it seems like the big screen, 70mm version of who you are. The epic Darlene Love film we’ve always waited for.
You’re not the first person to say that. It’s my dream and Steven’s dream, and I believe that God is in it. He orchestrated something big. We all need more love. We all need more peace. We have to find it ourselves before we can help anyone else. I have no idea where it’s going, but I think it’s going to be great.

The Lost Quotes: Looking Back on a Year of Music and Theatre with Tim Curry, Steve Van Zandt, Darlene Love, and More