Home Art These Powerful Political Posters Called Out Police Violence in L.A. and Beyond 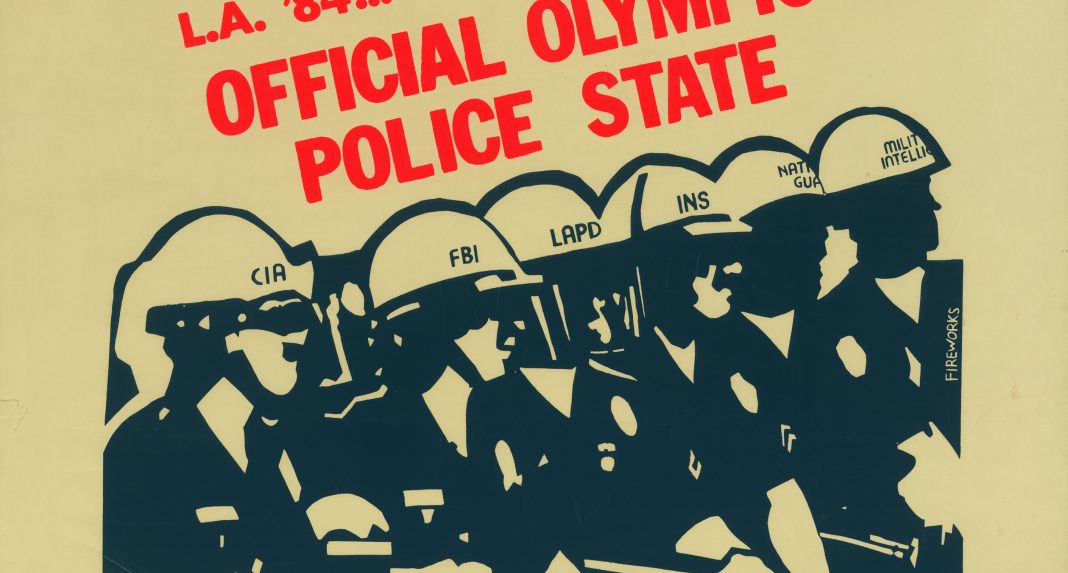 Before political memes ruled supreme in our current age of social media slacktivism, political posters offered artists a tangible expression of empathy or outrage. It’s true that political graphics are more ubiquitous than ever, as everyone from outspoken politicos to your great aunt in Iowa can plaster their Facebook feeds with ideological images that urge action (or, at the very least, that frowny face emoji). These digital memes are a far cry from the posters activists would silkscreen by hand and then wheat-paste across the city during covert, after-midnight missions. But now more than ever, there’s power in pictures. As the recent protests in Ferguson, the Women’s March, and actions against police violence have shown, an effective image is worth a thousand tweets.

This weekend, the Center for the Study of Political Graphics shares a selection of 75 posters from its archive of more than 90,000 images, which addresses the issue of police violence over the last few decades. The bilingual exhibition, To Protect & Serve? Five Decades of Posters Protesting Police Violence, will be shown at the historic Social and Public Art Resource Center (SPARC) in Venice, which has offered insight into politically engaged art since the 1970s and has been an essential space to showcase the often ephemeral messaging that accompanies times of great social upheaval. From the recent actions against officer-involved shootings to the 1970 death of Angeleno journalist Rubén Salazar, who was killed by police during protests against the Vietnam War, the posters display a wide variety of graphic design elements to call attention to the ways the powers-that-be wield deadly force. For these graphic designers, art can also be a weapon of resistance. A poster can’t stop a bullet, but an idea can change the world.

We recently caught up with Carol Wells, director of the Center for the Study of Political Graphics who shared some of the stories behind the protest posters on display at SPARC from December 16 through March 2, 2018. The exhibition kicks of with an opening reception on Saturday from 6-9 p.m.

“Daryl Gates took an aggressive, paramilitary approach to law enforcement years prior to becoming chief of the Los Angeles Police Department (1978 to 1992). In 1967, Gates was in charge of the tactical planning for the now infamous Century City demonstration against the Vietnam War, where police on motorcycles attacked thousands of peaceful protesters with billy clubs. In 1970, Gates organized the first SWAT Squad in the U.S. — it was first used to attack the Black Panther Party. In 1992, Gates was forced to resign following the civil unrest which erupted in response to the acquittals of the police officers who had been videotaped beating unarmed African American motorist Rodney King.” “This poster directs attention to the intensified militarization of the LAPD and the coordination of many branches of law enforcement, both local and federal, that took place prior to the 1984 Olympics. This was allegedly in response to later discredited reports that Los Angeles faced a threat of terrorist action during the games. But the primary reason was to suppress potential domestic unrest during the Olympics due to poverty, unemployment, and displacement. Police militarization accelerated the mass arrest and incarceration of African American and Mexican-American men that continues to this day. The militarization of law enforcement was never reversed and the proposed 2028 Los Angeles Olympics will provide another opportunity to expand the use of military weapons and tactics against the civilian population.” “‘Stop and frisk’ is a policing method carried out by the New York Police Department (NYPD) based on what is called ‘reasonable suspicion’ of criminal activity — others call it racial profiling. In 2011, 84 percent of those stopped by the NYPD were black or Latino yet they only make up 23 percent and 29 percent of the general population respectively. Multiple class action suits have been filed in response to this obvious racial profiling. A January 2013 court ruling deemed elements of ‘stop and frisk’ to be a violation of the Fourth Amendment.

This poster was created for the Silent March, held in June 2012, when thousands marched to demand an end to the criminalization of their communities. This silent and peaceful procession ended when NYPD officers pushed and corralled protesters for not complying with an order to disperse.”

“Rubén Salazar was a pioneering writer and journalist for the Los Angeles Times and KMEX-TV. He had been working on a story about police abuse, highlighting how local government seemed intent on ignoring all the complaints and violations involving police encounters with Mexican-Americans and African Americans. He had been receiving death threats, and the LAPD warned him to stop the stories.

After covering the national Chicano Moratorium march in East Los Angeles on August 29, 1970, Salazar and two friends stopped for a beer at the Silver Dollar bar. L.A. County sheriffs surrounded the bar, allegedly looking for a man with a rifle, who had actually been caught hours before. A sheriff’s deputy fired two ten-inch tear-gas projectile into the bar to make the occupants leave. The missile tore through Salazar’s head, killing him instantly. His body remained there for more than two hours. No indictments were ever made.”

“Three flags, three slogans, but all with the same demand: end police brutality. The top statement is, unfortunately timeless, and has been used whenever police abuse takes place. The other two can be connected with specific moments in time. ‘No Justice No Peace’ has been in use since the 1970s or ‘80s, but became the primary slogan associated with the 1992 civil unrest following the acquittals of the police officers who were videotaped beating Rodney King, an unarmed African American a year earlier. The Black Lives Matter movement began in 2013, after George Zimmerman was acquitted for fatally shooting Trayvon Martin. It became nationally recognized following the 2014 deaths of Michael Brown in Ferguson, Missouri, and Eric Garner in New York City. It is now an international movement — and involvement in Black Lives Matter can be found from the UK to Australia and Canada, where this poster was made.”