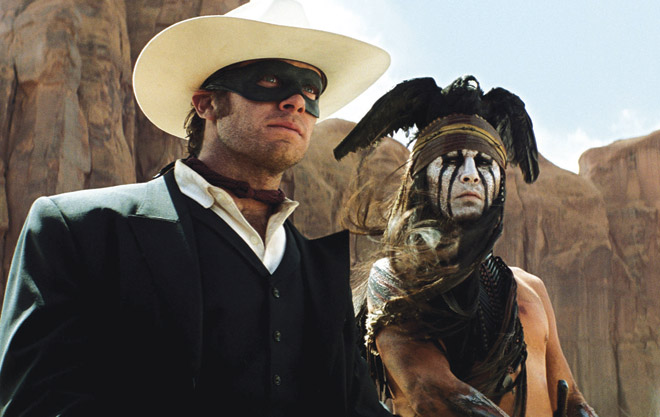 “Who was that masked man, anyway?” That’s the question young theatergoers will be asking themselves with the release of The Lone Ranger on July 3. Unlike most iconic crime fighter movies lodged in our pop culture consciousness, The Lone Ranger wasn’t trotted out for multiple remakes after its decades-long run on radio and TV had ended by 1957. But audiences do know Johnny Depp, and as the newer, weirder, meta-Tonto, he has a rare opportunity, in partnership with Armie Hammer as the titular white-hat wearer, to introduce multiple generations to a better big-screen breed of action star—the kinder, cooler western crusader.

Let’s start with the landscape. The most popular comic book superheroes are East Coasters, city dwellers in tights who fretfully hover over their slate gray metropolises. “With great power comes great responsibility” is Spider-Man’s dour lament. Meanwhile the Lone Ranger roams the Wild West, which is hazardous, certainly, but the hours per day of sunlight alone might explain why a vigilante cowboy  has an outlook as bright and expansive as the vista ahead. He doesn’t sweat the alter ego, choosing a mask that’s the  facial equivalent of a G-string—really, you barely notice it. And despite his handle, he’s not a loner. No matter how obtusely rendered, the Lone Ranger and Tonto are a buddy act, with a ten-point credo that includes “To have a friend, a man must be one.” (Take note, Spidey.) Then there’s the Lone Ranger’s DIY approach to gun control: He uses silver bullets—precious metal to represent precious life. Add to that a dude who sports a three-piece suit and red neckerchief in 90-degree heat. Now that’s the kind of fearlessness any Angeleno can understand.