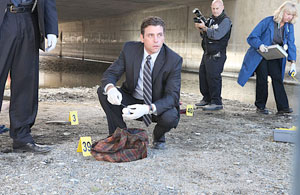 The second episode of Law & Order: Los Angeles aired last night, and although the show, titled “Echo Park,” started on Venice Beach and ended downtown (with a stop to Third Street Promenade for good measure along the way), it was more about character development than showing off local establishments.

Still, there was one heavy nod towards L.A. history: the murder victim was a former member of a violent cult inspired by the Manson Family. The Manson Murders shook Los Angeles just over 41 years ago, and to mark the 40th anniversary, Los Angeles magazine ran an oral history of the killings and trials last year.

Care to brush up on the backstory? Read our primer on the Manson Murders here.