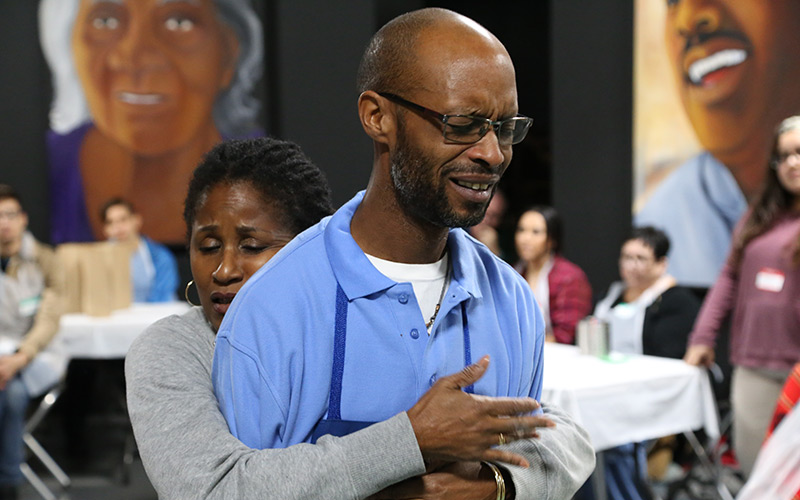 L.A. has welcomed myriad weird and interesting immersive theater experiences with open arms: In 2015, Brady Schwind’s revival of Carrie: The Musical put audiences at the center of the action thanks to mobile bleachers; Adrian Mercato’s Heretic Horror House, a brutal haunted house-type of experience, scares Angelenos silly year round; The Dragonfly Theater’s now-defunct show Point Break Live gave one insanely lucky audience member per night a chance to play the role of Keanu Reeves’ character, Johnny Utah, for the duration of the production. But there’s a new play opening this week that pushes the boundaries of immersive theater in a way we’ve yet to see.

Cornerstone Theater Company’s fellowship: a play for volunteers was built around the idea of philanthropy. It’s the eighth offering in The Hunger Cycle, Cornerstone’s initiative to present nine world premiere plays over six years exploring themes like urban and rural farming, food addiction, community gardening, and more. The premise of fellowship is thus: five people who regularly work the same volunteer shift must adapt when Hunger (with a capital H) visits their food bank. But the play is designed to put the audience right into the fray. Each ticketholder is treated as a food bank volunteer from the moment they arrive. “You get a name tag and a plastic apron, and then you’re directed to a table,” Cornerstone deputy director Sara Adelman says. “There are six tables around an open space, and the actors are also your table captains. As an audience member, you just go with the flow.” Over the course of the show, the audience prepares and assembles sack lunches for the hungry. Adelman says it’s the most immersive play Cornerstone has ever done.