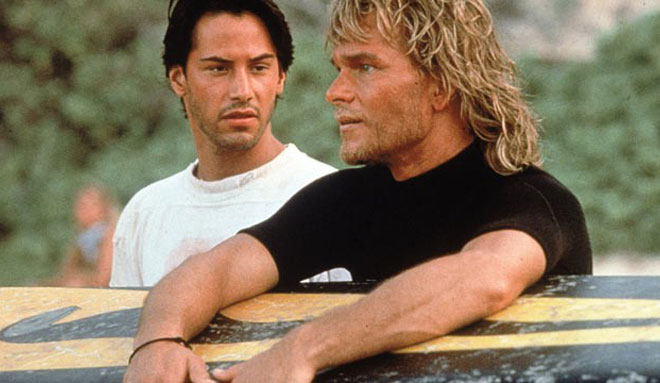 It’s already been a movie, a stage show, and the butt of endless jokes, but the 1991 flick about a bank robbing, koan-spouting surfer and the cop who goes undercover to catch him, is returning to its roots and becoming a movie — again. That’s right, in a town full of writers brimming with ideas, Hollywood is remaking Point Break.

No word yet on who will star but we do know, per the Hollywood Reporter, that the action will be set in the world of extreme sports rather than surfing and that Ericson Core will direct. Core is best known as a cinematographer (The Fast and the Furious, Daredevil) though he also directed the Mark Wahlberg football film, Invincible. He’s no Kathryn Bigelow but he’ll have to do. (On a side note, the best thing about Bigelow winning an Academy Award is that it allowed video stores to slap “From the Oscar-winning director of The Hurt Locker” stickers on Point Break DVDs.)

Will Point Break v2.0 be a straightforward action movie that merely updates the original storylinw with a new setting and current fashions? Or an ironic meta-narrative that acknolwedges the film as a trashy popcorn flick and an unlikely locus of cultural analysis? And is it too much to hope for a shirtless Channing Tatum?

After Point Break is remade and the universe of cinematic possiblity collapses in on itself, what then? A reboot of Snakes on a Plane? Another try at John Carter of Mars? A reimagining of Showgirls? Okay, we’d totally watch that last one.