Home Uncategorized Playing in the Forest 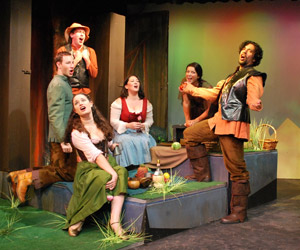 Here’s the problem with staging a Shakespearean comedy in 2010: humor is contextual. In their current production, the Kentwood Players modernized As You Like It by adding media and liberating some characters from the necessity of an Elizabethan accent, but they didn’t update the jokes. As a result, the actors laughed more than the audience, who sat obediently through the nearly three-hour performance directed by Karintha Touton at the Westchester Playhouse.

The highlight of the show is Drew Fitzsimmons, who directed the company’s recent production of The Importance of Being Earnest and reappears here as Touchstone, the jester of Shakespeare’s pastoral comedy. Touchstone introduces the show by asking the audience to agree that Shakespeare plays are boring and outdated unless they’re re-imagined like, ahem, the one that will follow. Though Touchstone proves his point with a well-executed imitation of a Jamaican Hamlet, a Texan Richard III, and a gangster Petruchio, the subsequent show fails to deliver the creative adaptation that Touchstone promises.

It certainly doesn’t help the Kentwood Players that As You Like It is one of Shakespeare’s less popular plays, however famous it may be for the philosophical speech that begins “All the world’s a stage, and all the men and women merely players.” Most of the story unfolds in the Forest of Arden, where court exiles and their supporters seek refuge. The sticky love-web that develops in the depths of the forest recalls an episode of Gossip Girl, especially in the sense that people are not always who they claim to be. Rosalind, the female lead, protects her identity by posing as a man and encounters fairly predictable consequences: She inadvertently attracts a young lady while trying to become close to Orlando, her heart’s true desire. Dramatic irony lends comic relief to the interactions between a hunkish Orlando (Lorenzo Bastien) and Rosalind, played by the talented Meredith Sweeney, who happens to be married to the actor who plays Touchstone. Alas, the love-web thickens…

It must be said that As You Like It is a low-budget performance with a charming and resourceful set, a refreshing sight after too many plays at the Ahmanson and Mark Taper Forum where elaborate sets are lowered every five minutes to legitimize the pricey seating. Not so at the Westchester Playhouse, where you can see a performance (the next one is Dracula) for under 20 bucks and support the local arts.

To learn about their upcoming performances, go to www.kentwoodplayers.org.