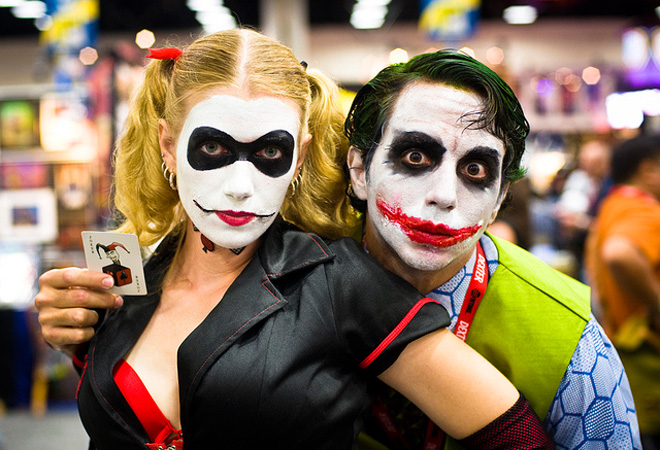 Once you’ve managed to score a badge for Comic-Con, you have to answer the crucial question: What do you wear? Sure, you could go in your civilian clothes and enjoy the experience in cushioned sneakers and comfy jeans. But to get into the full spirit of Comic-Con, it helps to dress up.

After all, Comic-Con is like adult Halloween, and seeing (then Instagramming) fans in their caped, masked, feathered, and winged Lycra finery is the best part of the event. Even if you’re not a hardcore cosplayer, here are 10 ideas that might inspire you to don a costume.

1. Go Medieval
There are tons of fantastic TV shows on the air. If you want to go old timey, break out the swords and dress as Arya Stark, Jon Snow, or one of the other characters from Game of Thrones. Just don’t try to recreate the Red Wedding. Or the Purple Wedding. Or… maybe avoid weddings altogether.

2. Retro Kitsch
Group costumes are the best, but they require a serious commitment. Round up your fellow Scooby-Doo fans, pack a cooler of Scooby snacks, and join forces to become the Mystery Gang. There’s Shaggy with his green shirt, blonde pompadoured Fred, danger-prone Daphne in her purple minidress, and Velma who rocks the knee socks. You might even solve a crime or two. Jinkies!

3. Friends Forever
Superhero comics have their share of dynamic duos—Batman and Robin, Superman and Wonder Woman, Hawkeye and Black Widow—and you’ll see lots of them on the convention floor. For a slightly less common pair, opt for the deadly Joker and his psychologist-turned-lover Harley Quinn. (Yeah, ethics standards at Arkham Asylum are pretty lax.)

4. Nerd Out
With all the superhero movies hitting screens, you’ll see plenty of Captain Americas and Spidermans. We prefer the Flash. The fastest man alive will run at light speed to solve any crime and restore justice to the city. Dress as him now and you’ll get in on the ground floor—before he gets his own movie.

5. Anime Action
The raunchy Japanese animated show Panty and Stocking hit its peak a few years ago, but it still inspires great costumes. The Power Puff Girls-esque show follows two angels who are kicked out of heaven and must buy their way back in by destroying ghosts with their lingerie-turned-weapons. Either sister would be an angelic choice for Comic-Con.

6. Cartoon Frenzy
Adventure Time, a Cartoon Network show about a young boy who goes around saving the day with his dog, is technically a children’s cartoon. But it’s not so secretly targeted at college students. The 13-year-old hero, Finn, or his female alter ego, Fionna, would be great choices.

7. Fight or Flight
Video game characters can be so simple yet so complicated. While it’s tempting to stick to Mario and Luigi with their easily recognizable overalls and mustaches, Chun Li from Streetfighter will let you harness your inner warrior with the help of her martial arts prowess and “ox-horns” hairstyle.

8. Disney Fanatic
Fans of Disney gravitate to animated movies to inspire their costumes, but the studio has also made some high style live-action fare. Pirates of the Caribbean’s Jack Sparrow with his dreads, beads, eyeliner, and bandana is an instant classic, but if you can pull of Davy Jones’s tentacle beard, that would be mindblowing.

9. Jude the Obscure
Before the 2010 action-comedy Scott Pilgrim vs. The World had hit theaters, director Edgar Wright premiered the movie at a Comic-Con panel. Attendees of the panel received a pin and toward the end of the discussion, Wright announced that anyone who had a pin with 1up logo on it would get to see the movie for free—right then. Like the Pied Piper, Wright led the chosen ones out of Hall H and to the Balboa Theatre where he screened Scott Pilgrim. The hugely hyped movie starring Michael Cera later bombed (or would that be Bob-Ombed?) at the box office, but it remains a cult favorite. Show off your comic geek street cred by dressing as perky yet fierce Knives Chau, Scott Pilgrim’s ex-girlfriend who cuts her hair and dresses like a hipster after Scott dumps her.

10. Cut It Out
Dress as any type of inanimate object and you’ll earn plenty of attention. The originality of these ideas and the dedication required to make them a reality are impressive. We’re particularly fond of seeing food items (cups of instant ramen, Pocky, McDonald’s fries) and vintage electronic devices (a Nintendo 64, a Nintendo Gameboy) made from cardboard cutouts, but the sky’s the limit.