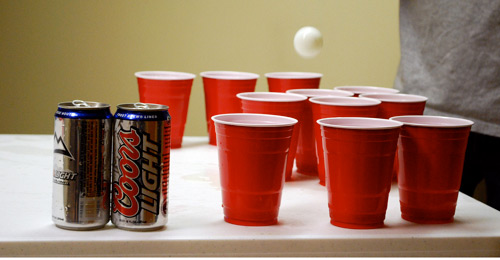 Thought booze and balls had their ultimate moment in the sun at The Charlie Saikley 6-Person Volleyball Tournament in Manhattan Beach? Yeah, so did I. That is, until I heard about the So-Cal Beer Pong Open happening this weekend at the Crowne Plaza Hotel in Fullerton—you know, in anticipation of The World Series of Beer Pong in January.

Think Wordplay, seriously buzzed. The tournament, which is set up for spectators (I’m told friends and family can cheer along with drink), includes six hours of play on Saturday, six hours of play on Sunday, and “other” beer pong events that go into the evenings (a beer pong talent show? A greatest hits of beer pong concert? A beer pong-inspired food challenge? I don’t know). But a $10,000 grand prize is definitely up for grabs.

Usually the mix of crowds, cash, alcohol, and paddles makes me nervous, but in this case I think we’re safe from everything but the next YouTube sensation. Good luck to the contenders and the Crowne Plaza.