Home Essays The Pleasures of Plane Spotting at the Proud Bird 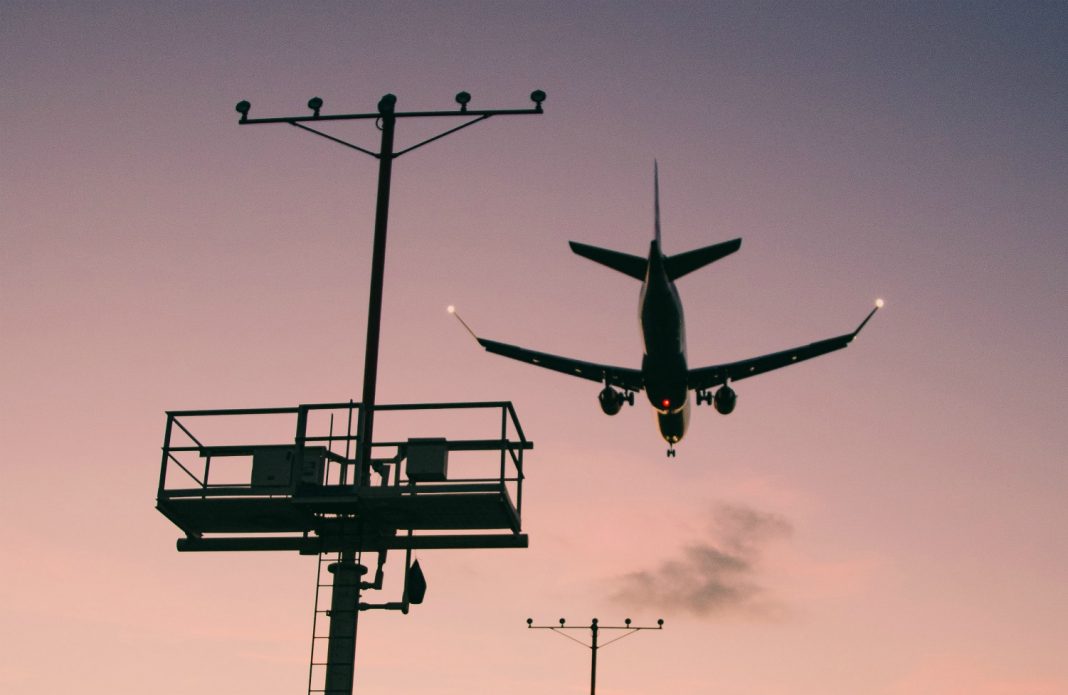 I leaned forward, craning my neck to the right to see into the distance as far as I could. Branches were blocking my view, but in between the foliage I could see a single white light.

“I see it,” I told Angie, leaning back in my chair. “That’ll be the Fiji Airways A330.” I took a swig from my Corona and glanced back at my phone. “Those people have been in the air for, wow, the last 11 hours.”

A few moments later, a gleaming white Airbus with its tail covered in the company’s distinctive brown logo soared overhead just a few hundred feet up, its wing flaps cranked all the way down and its motionless landing gear hanging like talons. Our heads slowly turned from right to left, watching the graceful plane glide down, then disappear behind the Aviation Boulevard traffic that stood between us and the end of Runway 25L at Los Angeles International Airport.

This is how my girlfriend Angie and I do plane spotting. Never with binoculars or telephoto camera lenses like the “professionals” do, but just with our iPhones and an airline tracking app like FlightAware, which, in addition to showing the location of specific airline flights, also shows the specific airport traffic patterns and even provides each aircraft’s tail number, altitude, speed, flight duration. Planes arriving into the airport are shown blue, while those departing are green.

And always, always, we do our plane spotting at the Proud Bird, which sits right at the eastern end of LAX’s Runways 25L and 25R. Though not listed on any of the major plane spotting lists of prime LAX locations, the Proud Bird offers decent food, large windows, cool aviation décor, and a full bar. We don’t do it that often, but every so often on a weekend, one of us will say, “Let’s go to the Proud Bird,” and that becomes our afternoon.

We’ll sit there, enjoying some drinks, and I’ll look at the app, and it will say there’s a Southwest Airlines 737 coming in from Las Vegas, or a United 767 out of Boston, and we’ll look up and imagine what it’s like for the people inside—the turbulence, the pitching and rocking as the pilot lines up on the runway, the dry fatigue from spending the last few hours in a cramped, dehumidified tube. We wonder who they are, what their lives are like, and why they’re flying to Los Angeles.

Once, I got distracted by a nearby TV or something and stopped checking the app. Angie grabbed my shoulder and pointed skyward. Above us, a Delta plane was suddenly careening skyward, away from the airport.

“Whoa,” I said. “Missed approach. Haven’t seen one of those before.”

Nearly done with our drinks, we stayed while we tracked the plane for the next 15 minutes as it slowly made its way back into the LAX traffic pattern. We stayed until the plane landed without incident, as though we were in some way connected to the people on board.

Opened in 1968 by Specialty Restaurant Corporation as a fine dining restaurant and banquet hall, the Proud Bird reportedly took its name from the old Continental Airlines slogan, “The proud bird with the golden tail.” It offered filet mignon, tuxedoed servers, and a host of old military aircraft scattered about the property (Specialty President David Tallichet had been a pilot in World War II).

In 1984, a fire gutted the restaurant, doing an estimated $1 million in damages and killing firefighter Benjamin Pinel of San Pedro. Though police arrested a part-time dishwasher and night janitor on charges of arson and murder, he was soon released for lack of evidence. The fire remains officially unsolved.

I grew up in Southern California loving aircraft, but I have no memory of ever visiting the Proud Bird. I remember driving past it with my father, Frank Pignataro, and admiring the Korean War vintage jets parked outside. Still, I can’t remember ever stopping. Perhaps I was too young to enjoy a “fine dining” establishment. Perhaps my dad had been there (at the time, he worked as an engineer at the nearby North American Rockwell plant in El Segundo) and didn’t care for the food.

It seems strange to me now because aviation plays such a strong role in my memories of my dad. We went to air shows at Pt. Magu, watched endless aviation documentaries on TV, and sometimes just stood in the backyard in Whittier and watched planes above us line up on their approach into LAX—our own version of plane spotting. “What’s that one?” Dad would ask, and I would guess something like “747.” And then he’d say “yep,” or “nope—L-1011” or some other such airliner.

He had been in the Air Force in the early 1960s, though not as a pilot. After he died of cancer in 2007, I found his old discharge papers, as well as photos of him as a very skinny 22-year-old stationed in Greenland; old Rockwell memorabilia of the Apollo spacecraft, B-1 bomber, and space shuttle from his years as an engineer; a tiny prototype aluminum sleeve for wire bundles he had designed years before and kept for some reason; and even a 1998 letter from his doctor (which he apparently ignored) warning him that his recent Prostate-Specific Antigen (PSA) test results warranted further screening.

My dad saved everything, I guess, except his own life.

The Proud Bird itself very nearly died in 2013. But its closure proved temporary, and in 2017 it reopened—in a massively renovated state—as a food hall. It kept the banquet hall as well, which today pays homage to the Tuskegee Airmen (the replica P-51 Mustang mounted in the parking lot sports a red tail, just like the old World War II Tuskegee squadron).

Around that time Angie and I saw the Proud Bird featured in a Food Network Star episode. Though living in Hawaii at the time, we decided to visit the place should we ever move back to Southern California. In the summer of 2018 we did exactly that, and soon after made our way to the Proud Bird.

In June 2019, Angie’s dad Jon and her stepmom Shan came to visit us. Of course we took them to the Proud Bird. While sitting by one of the big windows, Shan noticed two guys outside. One had a pair of binoculars and a thick paperback book he kept checking, while the other had a 35mm camera equipped with a zoom lens.

“What are they doing?” Shan asked.

Shan demurred, but when I said I’d go with her, she agreed. I figured she would, because Shan was always fascinated by people and their hobbies.

Sure enough, that’s what the two guys were doing. They were from London, and were just finishing a plane spotting tour of the U.S. And they were more than happy to show Shan the log the they were keeping of planes, and their reference book that detailed every airline’s aircraft inventory.

“It’s marvelous,” she told them before we headed back inside. “Thank you for showing us all this!”

Shan died three months later, also of cancer. Angie and I still return to the Proud Bird now and then. We still look up in the sky and imagine the lives of the strangers we can’t see, though it’s hard not to think of others—people we did know and love—who are vastly more distant.

RELATED: Even Amid the Red Scare, 1950s L.A. Was a Wonderland Without Fences for Young People