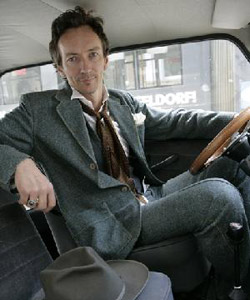 I started learning piano in the fifth grade. Every Wednesday after school, my wonderful teacher would show me how to read notes, play chord progressions, and, ultimately, perform songs. I began with short, simple pieces and worked my way through some Bach and Mozart (her choices) and Vanessa Carleton and “Rent” (my teenage choices). Each year I invited family and friends to the annual recital where my teacher’s students each showcased a song or two. It was nerve-wracking, to be sure, but also fun and fulfilling. I aspired to be as good as the older musicians. Then I got busy being a high school student—I stopped practicing, and eventually stopped taking lessons altogether.

Regret set in Friday night, when Hauschka (above) and Dustin O’Halloran (left) performed at the Masonic Lodge at Hollywood Forever. The dark, candle-lit room in the cemetery was the perfect backdrop for the evening—and it was packed. A friend and I perched upstairs on long wooden benches overlooking the stage, not knowing what to expect. What followed was an enchanting evening with surprising performances, unlike anything I’ve heard or played. The two pianists—one from Los Angeles, the other from Düsseldorf, Germany—made the same instrument sound exceptionally different, with two unique perspectives and ways of playing the piano.

Volker Bertelmann, the man behind Hauschka, modifies the traditional use of the piano by attaching objects to its strings to produce an experimental sound. A male, German Mary Poppins, he pulled endless objects—duct tape, ping pong balls, you name it—from his magic bag of tricks, changing the piano’s sound with each new tool—sometimes for the better, sometimes for the worse. The duct tape muted the sound, limited the chords’ vibrations; the ping pong balls bounced up and down like popcorn kernels as he struck the keys. At times the notes were light and airy; other times they were moody and melancholy. Hauschka interspersed his set with charming stories about his inspiration—several about vivid locations, and one about an interaction with an immigration officer at the airport. His performance was novel and inspiring—far different from my past piano recitals.

Unlike Hauschka, Dustin O’Halloran’s original compositions are heavily based in the classical tradition—more straightforward, less gimmicky. Aided by the Magik*Magik String Quintet (as was Hauschka), O’Halloran’s set was emotionally charged and raw. Man and piano. Or man, piano, and strings, to be exact. Circular images projected on a screen behind him became lighter and more colorful as deep chords gave way to higher, airy notes. He too engaged with the audience, and performed unreleased material from his upcoming albums. Overall, O’Halloran’s music was relatable, reflecting human emotions we’ve all undoubtedly experienced. It came as no surprise that his work has been featured in notable film scores such as An American Affair, Marie Antoinette, and Stranger Than Fiction, in addition to numerous commercials.

Compared with Hauschka’s experimental indie sound, does that make O’Halloran a sell out? I don’t think so. Both composers offered unique insight into a very traditional musical instrument, and I certainly benefited from the experience. It was like taking a piano lesson all over again.