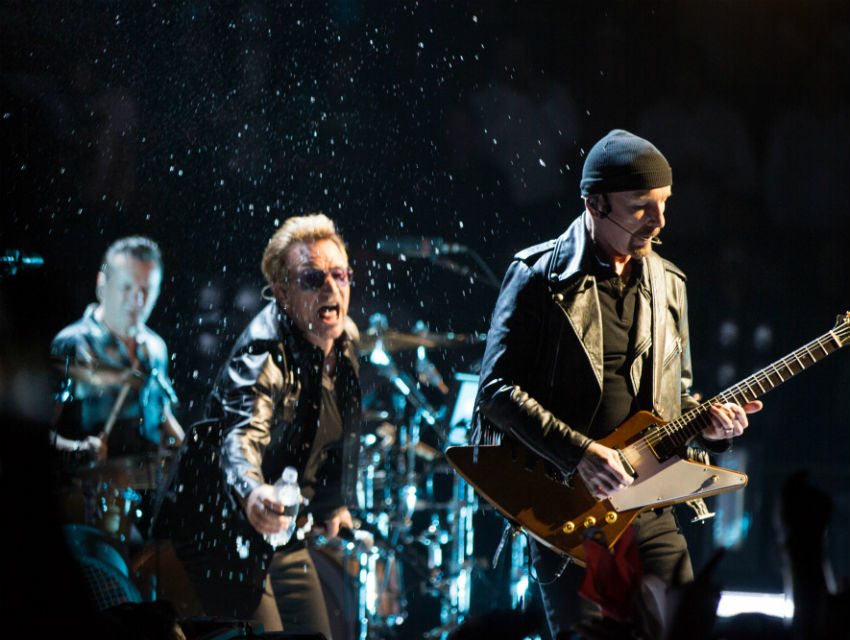 After a stellar first night out of five at the Forum this week, U2 woke up to devastating news Wednesday—their tour manager of more than 30 years, Dennis Sheehan, had died in his hotel room.

Suddenly, all the commentary on the ups and downs of the band’s recent history—the mixed response to Songs of Innocence parachuting into everyone’s iTunes libraries, Bono’s bicycling injuries, The Edge’s tumble off a stage (all puns withheld)—seemed silly in comparison.

“Last night we lost a member of our family,” Bono told the crowd in Inglewood Wednesday night. “Dennis Sheehan was his name. He was U2’s tour manager for 33 years. He loved, as we all do, the city of Los Angeles, and he called the Sunset Marquis his home away from home. He came to this city as a young man in the ’70s, working for Led Zeppelin. He always thought maybe U2 could be the next Led Zeppelin, which, of course, is impossible.”

“We did try once, at his last big birthday,” Bono recalled with a smile. “We turned up at his birthday dressed as Led Zeppelin. Adam [Clayton, bassist] was quite something; he had kind of the professorial John Paul Jones look. The biggest problem was I couldn’t quite fill Robert Plant’s pants. Who can?”

After learning of Sheehan’s death, the band announced that it would continue with the residency at the Forum as planned. They nodded to their late friend throughout the show, an impressive spectacle full of nostalgia that Bono appreciatively said took quite a team to put together.

The choice of the Forum and similarly-sized arenas for this tour implies that the larger-than-life band is scaling back. That isn’t the case. They make incredible use of the smaller space, and to great effect. A long catwalk bisects the arena floor, ending in a satellite stage that triples the value of the cheap seats for a while. The whole band took to the catwalk for a thunderous version of “Sunday Bloody Sunday,” with drummer Larry Mullen, Jr. manning a solitary snare drum.

Two parallel, billboard-style video screens are suspended above the length of the catwalk and the band gets in between them, strolling nostalgically through images of Dublin in the rain or behind gigantic projections of themselves (as The Edge soloed on the catwalk, Bono’s projection “held” him in the palm of his hand like a tourist holding the Eiffel Tower). It’s a beautiful audiovisual experience that simply wouldn’t play as well in a stadium.

Their stage presence, though, is still as boisterous as it would need to be to catch the eye of the farthest spectator in a stadium. Bono may not stage dive from the balconies anymore, but U2 knows what works, and they’re not shy about executing it.

The visuals served to turn hits such as “Beautiful Day” and “Bullet the Blue Sky” into explosive moments, but it also showcased new material like “Cedarwood Road” in a compelling way, so much so that one could argue their latest album was dismissed too quickly, with more focus on the album’s unconventional delivery method than the songs on their own merit.

Whether or not that was the band’s intent, it sounded excellent. Grand gestures and speeches are par for the course at a U2 show: Bono flung water on the crowd, fell to his knees, thanked Los Angeles for being one the kindest cities to their career, and praised America for leading the fight against AIDS.

In a relatively intimate show that meandered through the past, the band’s performance was fixed on the future. Broken bones, missteps and other setbacks be damned—U2 is reasserting itself as the formidable live band we’ve known them to be for decades, the band that Dennis Sheehan wanted them to be.

“We made a live album way back when,” said Bono before the last song of the night. “It was set in Colorado at Red Rocks. It was called Under a Blood Red Sky. We used to end the show with ‘40.’ And whatever happened that night, nobody was singing the refrain. So we were backstage, just trying to figure out what the hell was going on and trying to make it happen. We just heard this lone voice, this single voice, singing ‘How long to sing this song’—a light voice, beautiful tremolo. And it was the voice of Dennis Sheehan, trying to get everyone to sing, which they did. So we dedicate this song; in fact, we dedicate the night; in fact, we dedicate our whole tour to the very vivid memory of Dennis Sheehan—St. Dennis of Dublin, as he’s known around here.”

U2 played:
The Miracle (Of Joey Ramone)
Out of Control
Vertigo
I Will Follow
Iris (Hold Me Close)
Cedarwood Road
Song for Someone
Sunday Bloody Sunday
Raised by Wolves
Until the End of the World
Invisible
Even Better Than the Real Thing
Mysterious Ways
Desire
Angel of Harlem
Every Breaking Wave
Bullet the Blue Sky
Pride (In the Name of Love)
Beautiful Day
Bad
With or Without You

Encore:
City of Blinding Lights
Where the Streets Have No Name
40

Slide Show: Get a Taste of Brokechella’s Indie Cool Vibe