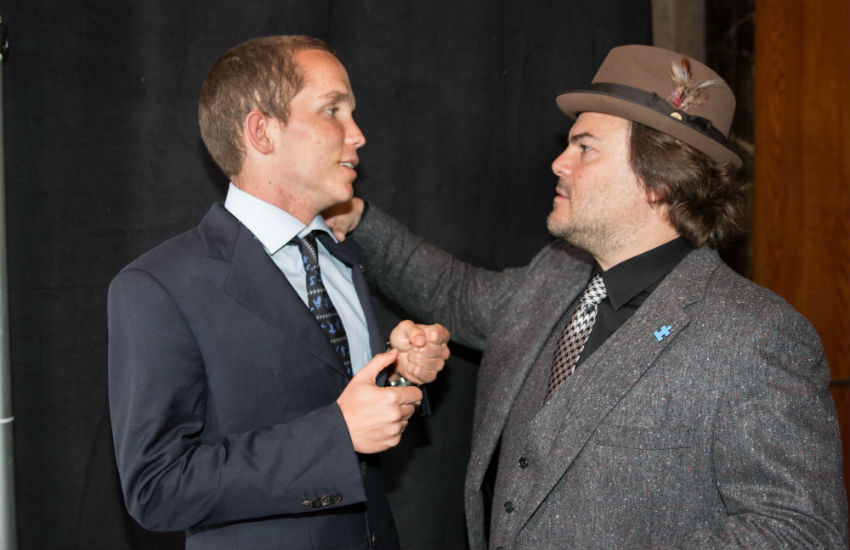 Rock legends and Hollywood A-listers joined forces at the Pantages Theater on Saturday night for the sold-out, third annual Light Up The Blues concert to benefit Autism Speaks. Jack Black played emcee for the evening, which is hosted every year by Stephen Stills of Crosby, Stills & Nash (and Young) and his wife, Kristen. The event raised money for continuing research, cultivating awareness, and supporting those affected by autism.

Stephen Stills teamed up with his former bandmate Neil Young to headline the show, along with Steve Earle, Shawn Colvin, The White Buffalo, and Stephen’s son Chris Stills. Last year’s event at the Ace Hotel raised more than $320,000, and this year it upgraded to the Pantages—a venue nearly twice the size.

“It’s the culmination of a lot of work and thought,” says Stephen Stills, whose son Henry is on the autism spectrum. “I’ve always said that if we make three, then it’ll become ‘a thing.’ Kristen produced this one; it was a core group of five people. Now that we know we can do it ourselves, it’ll get easier, we hope. It won’t be ‘the thing that ate April.’”

Light Up The Blues is distinct because it features performances not only from rock royalty, but also from performers on the spectrum, often alongside one another. Performers on the spectrum included Spencer Harte with violinist Petra Haden, Nick Guzman and Matt Savage, as well as Neal Katz, who delivered a text-to-speech message via an iPad.

Wyatt Isaacs, a star of Autism: The Musical, was no stranger to the night’s host and emcee. He’d previously performed a song from the musical, “Sensitive,” with Stills and Black.

“It’s been pretty incredible,” says Isaacs, who lives with Asperger’s. “It just started out with me doing ‘Sensitive’ and being in Autism: The Musical, and then it just grew. The word just went. It’s pretty incredible how something little can have such a big impact on the community.”

“These performers are incredible,” says Christina Applegate, a longtime friend of the Stills family who has supported Light Up The Blues from the start. “And they live in this other world. They get off that stage and they’re not in the same world we’re in. But they have hope. They get up on that stage and they are no longer someone with a condition. They’re no longer looked at as someone who’s autistic or on the spectrum. They are looked at solely as artists, and it’s a beautiful thing to see.”

Like Applegate, actors Gary Cole and his wife Teddi Siddall have walked the blue carpet for all three years of Light Up The Blues. Cole and his wife have a child on the spectrum and noted that donations, while important, aren’t the only way the average person can make a meaningful difference.

“Befriend a family with a member on the autism spectrum,” Siddall says. “And if your child has the opportunity to be friends with a child on the spectrum, encourage it. It’s wonderful for both of them.”

Funds were raised through donations and a silent auction of items signed by the night’s performers. The top bid for a signed Fender Telecaster—scooped up for $23,000—came from Brad Pitt.

Autism Speaks partnered with Google to map the human genome, and because of events like this, says Chris Stills, they’re able to do it for free.

“It’s open science. It’s not a patented thing. It’s for everyone to share,” he says. “A lot of the giant pharmaceutical companies try to rake in the dough, but what I love about Autism Speaks is that they’re just trying to put themselves out of business. That’s a good cause, right there. That’s why I back it.”

The concert is a flagship night highlighting Light Up The Blues, Autism Speaks’ annual global campaign during Autism Awareness Month in April. Proceeds not only fund scientific research, but advocacy efforts and aid for autistic individuals and their families.

“The more money and awareness that’s raised opens up the door to a family in a small town who may not have really heard about this but has a child in their home that they don’t understand what’s going on with them,” Applegate says. “They have a place to go. They can go on the site and find out, ‘Is this what’s happening with my child?’ And they have a community. They have some place where they can feel support.”

A documentary about the first Light Up The Blues concert, featuring CSN, Don Felder of the Eagles, Lucinda Williams and others, is available on iTunes.