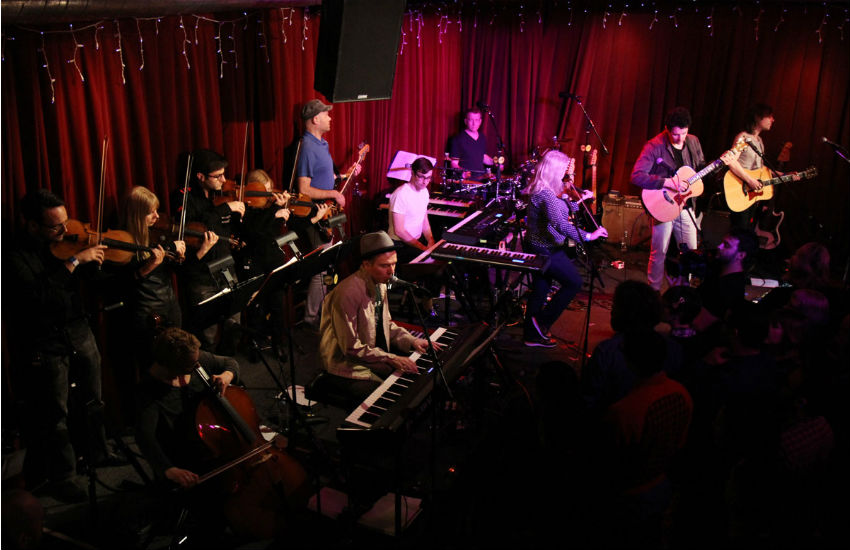 Belle and Sebastian kicked off KCRW’s first Apogee Session of 2015 in support of their brand new release, Girls in Peacetime Want to Dance. It’s their only local show before Coachella and you can watch it online as a part of Morning Becomes Eclectic on February 2.

The band, which in addition to front man Stuart Murdoch counts Stevie Jackson, Chris Geddes, Richard Colburn, Sarah Martin, and Bobby Kildea, treated two hundred fans to an interview with KCRW DJs Jason Bentley and Marion Hodges, as well as a 10-song set mixed by venerable soundman Bob Clearmountain in his own recording space, Apogee Studios in Santa Monica. Girls in Peacetime Want to Dance is the indie band’s first studio offering in five years, but its ninth album over the course of nearly 20 years. It’s certainly not bad for a band that started out as a university project and developed a “very purposefully mysterious” persona to their fans, said Hodges, by eschewing traditional publicity.

“You’d be surprised at that word ‘purposefully,’” Murdoch says with a laugh. “Nothing this band has ever done, apart from making records and playing gigs, is purposeful. But right off the bat, we had a much better relationship with the people who came to see us than we did the press and media and the record company, because they understood straight away.”

The audience has remained, and so has Belle and Sebastian, steadily putting out records and, in Murdoch’s case, trying out filmmaking. The past few years have seen him busy writing and directing God Help the Girl, released in 2014. Girls in Peacetime somehow emerged in that time, as well.

“I was going to swear there, but I shouldn’t because it’s the radio,” Murdoch says. “I was going to say [working on both] was a something sandwich and I was the something in the middle. I finished editing the film on a Friday and on Monday we were on tour and we came back and started writing the LP, which was a pleasure after the film.”

While Belle and Sebastian’s music has always been sincere and sensitive, it’s never been known for being confessional. Murdoch’s skillful lyrics are his most autobiographical yet, opening up about his longtime struggle with Chronic Fatigue Syndrome on “Nobody’s Empire.” The album is also fairly upbeat, crossing a jaunty line with which they’ve flirted in the past, due in part to the direction of their new producer, Ben H. Allen (Bombay Bicycle Club, Cee Lo Green).

The clear contrast between the inspiration and the output is a fascinating and welcome change of pace. Tracks like “The Cat With the Cream,” though, are full of the softer, melodic nostalgia and wonder of classic Belle and Sebastian. The literary allusions, such as “Enter Sylvia Plath,” are also true to form, but the fact that a song called “Enter Sylvia Plath” is a nearly seven-minute techno track may be the easiest way to sum up this record in a line.

Belle and Sebastian are dancing away from the more Wes Anderson-esque aspects of their reputation while sounding as pure, bright and confident as they’ve ever been. For a band with nine studio albums and almost 20 years under the belt, that enduring and relaxed sense of self may be the secret to 20 more years. We look forward to seeing them cut loose on the Coachella stage in April.

Belle and Sebastian’s setlist:
The Party Line
Le Pastie de la Bourgeoisie
The Power of Three
My Wandering Days Are Over
[INTERVIEW]
Perfect Couples
Fox in the Snow
Nobody’s Empire
Dog on Wheels
Legal Man
Sleep the Clock Around