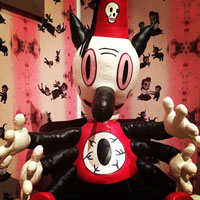 Peopled with creepy-cool cartoon characters, Gary Baseman’s first retrospective is a study in what happens when an imagination runs riot – in the best possible way.

For Gary Baseman: The Door is Always Open, on display at the Skirball through August 18, the native Angeleno got the keys to the kingdom. What did he do with all that creative leeway? Baseman trucked in family photos, 20-odd sketchbooks, dozens of 1930s mannequin heads, and his parents’ dining room set to create an eye-popping homage to his childhood home. The result is a creepy-cool fantasyland where Baseman’s menagerie of characters – most notably his fez-wearing alter ego Toby – exist alongside personal mementos and family heirlooms.

Laid out across seven “rooms” (a den, a living room, a bedroom, etc.) it’s the Skirball’s answer to the MoMA/LACMA Tim Burton show. Though it looks like something Walt Disney might have dreamed up while freaking out on peyote, ultimately it’s a love letter from Baseman to his parents and to the Fairfax district where he grew up.

A painter, illustrator, board game designer, and inveterate collector who seems willing to try his hand at any medium that strikes his fancy, Baseman was on hand at last night’s opening to lead walkthroughs of the show. He was the warmest and most welcoming of artists. Anyone who talked to him – and the line of admirers was long – received a metal key that he had made using Toby’s likeness and a real key from his childhood home. Joy. Color. Abundance. These aren’t merely the hallmarks of Baseman’s work. They are the foundation of his personality.

This L.A. Artist Draws Galactic Feminist Dreamscapes We Wish We Could Live In