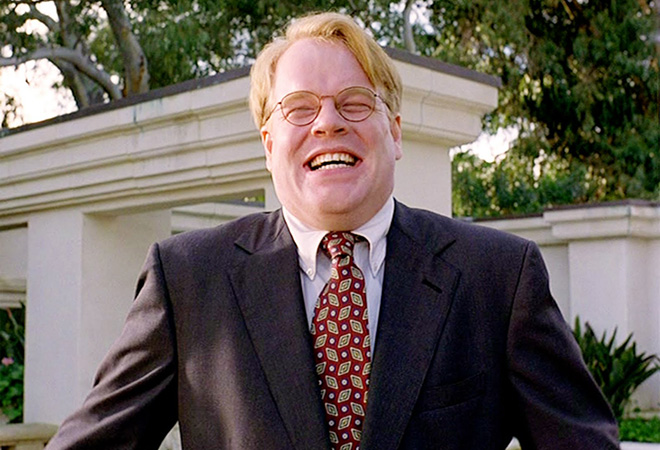 More than any other actor of his generation, Philip Seymour Hoffman turned uncoolness into an artform. On Sunday, he died of an overdose at the age of 46.  The term “character actor” can sometimes, even unintentionally, diminish an actor’s skill but Hoffman was a character actor in the best and truest best sense. He took characters who could have been punchlines and turned them into human beings.

In Boogie Nights and The Master it was like watching characters from Fassbinder melodramas stumble through stories about the dark side of American aspiration. Hoffman had a knack for playing tortured souls—outsiders, observers, and hangers-on, those who felt like aliens not merely in the culture but in their own skins. Here are some of our favorites.

❸ Almost Famous (2000) – Playing irascible and astute rock critic Lester Bangs he tells aspiring writer William who phones for advice, “I’m always home. I’m uncool… The only true currency in this bankrupt world is what you share with someone else when you’re uncool.”

❹ Along Came Polly (2004) – It may not be the most critically acclaimed film on his resume, but Hoffman’s performance as washed up former child star Sandy Lyle proves that he never slacked when it came to a role (regardless of the film’s quality). He was only ever meant to support Ben Stiller’s lead, but as usual, he stole the show.

❺ Capote (2005) – Hoffman won an Oscar for his depiction of the raconteur, storyteller, and journalist Truman Capote. Maybe it was because unlike others who have portrayed the In Cold Blood author, Hoffman captured more than Capote’s flamboyance, he captured Capote’s introversion and keen observational skills.

❻ Before the Devil Knows You’re Dead (2007) – This was Sidney Lumet’s last film and one of his most pitiless. Costarring with Ethan Hawke, Hoffman plays one of two brothers who plots the robbery of his parent’s jewelry store. Even if they get out alive, no one gets out unscathed. Hoffman is thoroughly nasty yet vulnerable. He makes it clear, as he told Los Angeles magazine in a 2008 interview, that his character is the unloved child, simultaneously seeking revenge on his parents and hoping to disprove their low expectations of him.

❼ Synecdoche, New York (2008) – It’s impossible to imagine another actor playing Caden Cotard, the desperate, dyspeptic theater director who grapples with his (seemingly) looming death by building a mass-scale replica of New York City to stage his final work. The film, written and directed by Charlie Kaufman, is complicated and dizzying, and yet the viewer is able to follow Hoffman’s performance, which is as powerful and tireless as a chugging train.

❽ The Master (2012) – As Lancaster Dodd, P.T. Anderson’s version of L. Ron Hubbard, he was imperious, creepy, and not half as perceptive as he made himself out to be. Throughout the movie, Hoffman exudes an air of menace but as with many of his other characters, Dodd feels like he’s either holding something back or keeping something at bay. This is meant to be a man in charge, a man with a devoted group of acolytes, yet there’s something fundamentally flawed within him.

BONUS
The Big Lebowski (1998) – He’s not on screen for very long, but his character, Brandt, the eager butler to the other Lebowski, is like a benign Freddy from Mr. Ripley crossed with Scotty from Boogie Nights, a smiling gatekeeper to the not-so-glamorous world of success and wealth.

Gilbert Gottfried Has Died from Heart Disease at 67