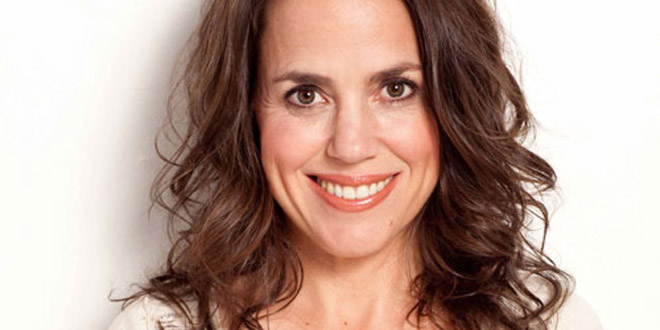 Is L.A.’s best-kept musical secret finally about to become a household name? Released this week, musician/vocalist Petra Haden’s Petra Goes to the Movies is already getting primo mentions in all sorts of publications — including a spunky little mag called Los Angeles.

Movies is a sequel of sorts to Haden’s acclaimed 2005 record Petra Haden Sings: The Who Sell Out, where she recreated an entire album by Pete Townsend & Co. using just her multi-tracked voice and strange powers of aural mimicry. It’s a (mostly) a cappella song cycle constructed from such iconic film scores as Psycho, 8 1/2, Cinema Paradiso, and The Social Network. It is Haden’s valentine to cinema’s great composers and dedicated to, in her words, “all composers around the world who help make images on a screen come to life.”

Do you think you’re musical outlook has been influenced by growing up in a movie town?

It certainly seems like I would be…My dad [jazz bassist Charlie Haden] would call me, “You have to turn on Turner Classic Movies; they’re showing The Big Sleep!” And of course the music is the first thing that jumps out at me. The same with David Raskin’s music for Laura. I wanted to buy that score right when I heard it! Recently, I saw The Old Man and The Sea [and] I noticed that the music was going on throughout the whole movie. That’s what I love about those old movies — the music is like a constant companion. Even in scenes that aren’t particularly dramatic, like a woman checking her watch, you hear the music as a comment on that action.

You had some experience doing music for films. Did that in any way inform this current project?

Yeah. When I was recording my first solo album Imaginaryland, I was listening to a lot of movie scores. There’s this movie called Delusion that I was obsessed with because this band Miranda Sex Garden had some of their songs in it. Their music was a cappella with some instruments, and it reminded me of Steve Reich…Then there was this movie called Green Card…

The one with Gerard Depardieu?

Yeah. I love Andie MacDowell. [laughter] There was an Enya song they had at the end credits called “Watermark” that just blew me away. So I always related my favorite music to the movies. That’s when I got planted in my brain: “Why does every time I see the move I want to sing every part or be in the orchestra playing that score?” For me, playing the score for Leonard Rosenman’s “Rebel Without a Cause” or one of the Looney Tunes cartoons would be pure ecstasy.” So I thought, “I’ll just pretend I’m my own orchestra and sing all the parts.”

That’s the approach you took with The Who Sell Out. Were you unprepared for all the attention you got from that?

Yeah, I don’t know really why it got the attention it did. I still kind of want to re-record it in a real studio, but that’s the past and I just love it how it is. It shows a certain spontanaeity, that I didn’t care to make it sound perfect, which is what I like about it. Of course after it came out I was beating myself up about it…I wanted the music to be right, that’s what I get really paranoid about. But it was so exciting for me to have all this positive reaction to a record that I started five years earlier.

Your selections for Petra Goes to the Movies are eclectic. I was excited when I saw you included that Trent Reznor-Atticus Ross song “Hand Covers Bruise” from The Social Network. That’s the tune that plays in the beginning when Zuckerberg is running from the bar back to his dorm to invent Facebook, right?

I loved that movie but it was the music that I kept paying more attention to. The music so informed those scenes and what they meant. That was the last song I recorded for the album. It’s so simple yet so amazing: that one note just hovering over this simple piano line. I felt a sense of history when I heard it — like the whole world is about to change and no one knows it yet.

What was the first song you did for the record?

I think it was Ennio Morricone’s score for Cinema Paradiso. My dad covered that song with Pat Metheny a long time ago. It’s an important song for my family and it’s a part of me, so I felt I needed to do it.

You also cover Bernard Herrmann’s “God’s Lonely Man” from Taxi Driver. Which one is that?

It’s in the scene where De Niro is driving though Times Square and he’s reflecting on how disgusting and gross the streets of New York are — “someday a real rain will come and wash all this scum of the streets,” that one — and he says, “I’m God’s lonely man.” The whole time he’s saying this  you hear this slow, pulsating chord that just builds and builds and then the ending chord comes — BOOM! — and then it starts over again. Listening to it feels a lot like a wave. The song “Planet Krypton” [from Superman] has that too.

Which song was the hardest to re-create?

The beginning of “Rebel [Without A Cause]” is really hard to do. I actually wasn’t going to do it because it was so challenging. The melody is really easy to remember and sing, but you have to get past that crazy beginning. It doesn’t last long, so I thought, “Whether I like it or not, I’m gonna figure this out.”

You also chose a song from the film My Bodyguard. Weren’t you like seven when that came out?

I cry every time I see that movie, especially when Linderman reveals the abuse he’s suffered; I thought, “Ohmigod, he’s just a gentle giant!” And the music really made me understand that. [The composer] Dave Grusin also did the music for Tootsie. I had no idea I liked Dave Grusin so much before I did this record. [laughter] They should do a remake of My Bodyguard, especially with all of the bullying going on now.

There’s a smattering of foreign films scores on here too, like Fellini’s 8 1/2.

That another crazy movie that’s all over the place…I love how mysterious it was, and the score is almost like circus or carnival music. I wanted to do something off the wall like that. It’s so crazy and wacky it could be a Looney Tunes song now that I think about it. My friend Woody Jackson, who recorded it, had a taken-apart trumpet hanging on his wall and he let me sing the song though the mouthpiece. Jut to get that brassy feel that the original has. Hal Willner suggested I do the song “Carlotta’s Gallop” because he’s a big Nino Rota fan.

This is the first solo record of yours that your dad plays on. What took so long?

He always wanted to play on something of mine, but it never seemed to work out. I played him my version of “It Might Be You” [from Tootsie] and he said, “Man, that sure could use some bass! If you can think of anyone who’s interested…’ “I said, ‘Daaaad, of course! I want you to play on it, it’d be perfect!” But then he heard my version of “This Is Not America,” which Pat Metheny had written for The Falcon and the Snowman and my dad covered with the Liberation Music Orchestra, and was like, “This is the one I want to play on.” He did and he made it a hundred times better. It made sense. Every single note he plays is beautiful.

Read the complete interview at StompBeast.
Listen to a full album stream of Petra Goes To the Movies.