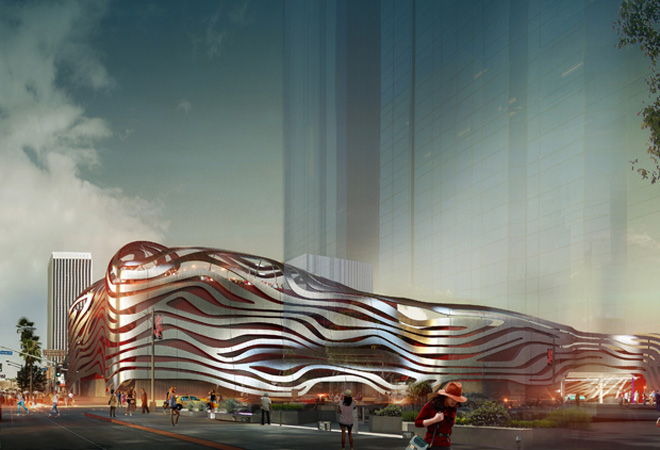 The corner of Fairfax and Wilshire is set for a major update if the Petersen Automotive Museum’s revamp goes forward as planned. Located at the corner of Fairfax and Wilshire, the museum’s home has always been an awkward fit: It’s a stolid, white, thoroughly forgettable office building that holds (some would say hides) a treasure trove of sleek, gorgeous machines. The structure lacks distinctive signage on the Wilshire side and visitors can’t access the museum from the street; they can only enter from the parking lot. Sitting at one of L.A.’s most notable thoroughfares, it’s one hell of a missed opportunity.

The new design aims to change that. It’s not a teardown of the building, it’s a new edifice that’s set to be unveiled in 2014 to mark the Petersen’s 20th anniversary. Designed by Kohn Pedersen Fox Associates, it features (per the press release):

“Long ribbons of stainless steel [that] will wrap around three sides and over the top of the deep red building, making a visceral statement that evokes the imagery of speed and the organic curves of a coach-built automobile. At night, the color and forms will be lit from within to accentuate the steel sculpture.”

Miracle Mile, say hello to your Fiery Red Zebra. It’ll be skipping distance from the new LACMA, which Michael Govan hopes to morph into a Big Black Amoeba. If all goes as planned, the Wilshire/Fairfax thoroughfare will be home to some of L.A.’s boldest and most visually arresting museum architecture.

There’s no doubt the Petersen has an impressive collection of cars. Here’s hoping the metal zebra gives the Petersen more curb appeal. Now, if someone would just turn Johnny’s into a working restaurant…