Home Books Peter Mehlman Sounds Off on His New Novel, Writing for Seinfeld, and... 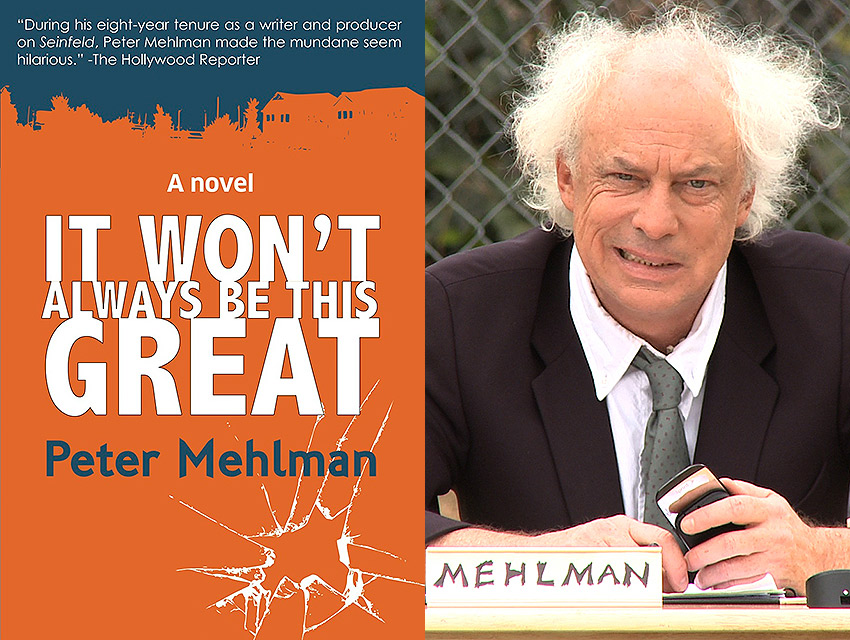 Where do you go after writing for Seinfeld (especially if you penned the famed “Yada Yada” episode)? If you’re local writer Peter Mehlman, who has also written for The New York Times, The Washington Post, GQ, and Esquire, you move on to your first novel. Mehlman’s debut work, It Won’t Always Be This Great, is out today. We caught up with him before his Q&A and book signing at Barnes & Noble tomorrow, September 16, to chat about this new career path, his New York roots, yada yada yada…

You have spent most of your life crafting a career in journalism and television writing. What inspired the plunge into fiction?
Not that I ever had goals, but writing full sentences always looked like it would be my career track. Frankly, Seinfeld was a detour. It was a fantastic detour—a thrilling, mind-blowing, eye-opening, grossly overpaying detour—but a detour nonetheless. When the exit ramp off TV finally showed up, the thought of making nouns and verbs agree with each other again was irresistible. Suddenly, living in real America as opposed to fictional New York prompted a flood of ideas for essays and articles. Anything fascinating or annoying turned into a thousand words, until one fascinating/annoying piece of Americana turned into 382 pages. Making the leap to fiction was pretty unexpected. In fact, I was 30 pages into it before realizing I was writing a novel.

How did your expansive oeuvre in both journalism and television affect—be it positively or negatively—your ability to craft and finish this novel?
I have an oeuvre? Wow. If I’d known I had an oeuvre, this book may never have gotten done. Now aware of my oeuvre-ship, both of my major oeuvres were big contributors to writing the novel. The journalism oeuvre helped because reporting is all about looking outward at the world and getting your impressions down in a concise, grammatical way. The Seinfeld oeuvre was the opposite: it required looking inward at your thoughts and creating fictional situations. Those years on the show were a non-stop struggle to learn how to be creative. So, seeing as not one character or event in the novel is based on any real person or event, the creativity training was vital.

Two slight downsides to my oeuvres:

1. At times, I fought the Seinfeld instinct to go with anything that’s truly funny. The novel is (allegedly) funny, but there were times when going for laughs was totally inappropriate.

2. Occasionally, I had to remind myself that Larry David or Jerry Seinfeld or Howard Cosell or the sports editor of The Washington Post weren’t going to read my work every day. And even if they did, it wouldn’t really matter what they thought. The fact that it was all mine was both unnerving and freeing.

You’re a New York native, but you’re based out of L.A. Why set this book in New York? Do you still consider yourself a New Yorker or have you made the transition to Angeleno?
I made the transition to being an Angeleno pretty much after stepping out of LAX. After working for ABC sports during the 1984 Olympics, I knew I’d move here someday. I unabashedly love L.A. to the point where those vanity plates that say “X NYER” or “LV NYC” make me want scream, “If you need to put that on your license plate, go back.” That said, New York and L.A. are incredible cities, and there’s no reason to anoint one the best. The truth is, the culture war between New York and L.A. has always been fought by the most miserable people in both cities.

Partly, the novel is set in New York because an important scene required freezing cold weather. Also, New York has a more stark contrast between city and suburbia. The narrator of the novel feels trapped in suburbia, stifled by the smallness and oppressive tact it takes to live there. That wouldn’t work here because L.A. is the only place where you can live in a split-level ranch house and still feel like you’re in a city.

In what ways do you find L.A. inspiring your writing?
The most inspiring feature of L.A. is the dreaminess of the people. There’s something beautiful about how everyone comes here with such high aspirations. Even if they’re ridiculously self-deluded aspirations, people take their shot at whatever they consider “big things.” Coffee joints are packed in the middle of the day, and while part of you is thinking, “Doesn’t anyone work here?” another part of you thinks, “Good for you. Striving to wear a suit in the sterile office of some slimy hedge fund is beneath your dignity. You’re in L.A. because you want better.”