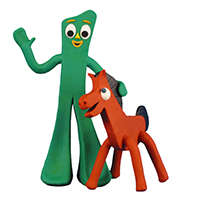 For World Cup fanatics, here are 10 great places to catch a match in Los Angeles. (The United States doesn’t play Ghana until Monday.) For everybody else, here’s what else is on tap:

MOVIES: Los Angeles Film Festival
The cinema confab, which kicked off on Wednesday night with the North American premiere of Snowpiercer, runs for nine days in downtown. Since you probably can’t catch all the flicks, here are our picks for the fest’s 10 must-see movies, many of which have local flavor. More information (June 11-19; L.A. Live)

MUSIC: The Low End Theory Festival
The Airliner in Lincoln Heights has hosted the Wednesday-night club Low End Theory for the past eight years. Flying Lotus and the Gaslamp Killer got their start there; Thom Yorke and Erykah Badu have also played sets. The action moves to Echo Park, adding to the lineup the dreamy pop of Baths and the soul breakdowns of the Internet. More information (June 14-15; The Echo & The Echoplex)

CELEBRATE: Gumby Fest
The most flexible guy in showbiz gets his due in creator Art Clokey’s hometown. Screenings of the vintage TV series, memorabilia sales, and kid-friendly activities are on the schedule. More information (June 14; Glendora Library)

MUSIC: The Both
Singer, songwriter, and former ‘Til Tuesday member Aimee Mann teamed up with DC rocker Ted Leo. In April, the pair released a collaborative album under the name the Both. Now, they’re playing shows together. More information (June 14; El Rey Theatre)

PERFORMANCE: Hollywood Fringe Festival
The annual arts festival returns to give L.A. a chance to freely express itself in all mediums. With no restrictions on who can enter and what is shown, the fest displays works from all walks of life. More information (June 12-29; various locations)