Home Uncategorized Pencil This In: Urs Fischer at MOCA 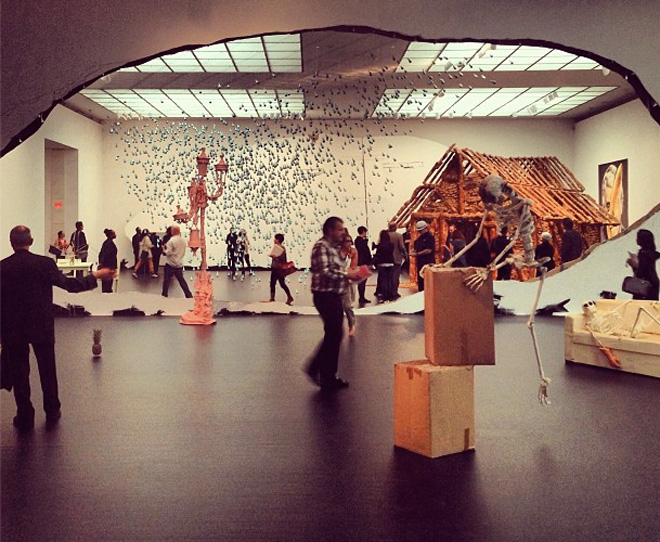 If you haven’t gotten a chance to check out the Urs Fischer retrospective at MOCA Grand Avenue and The Geffen Contemporary, make it a priority this summer. The exhibit, which opened April 21 and runs through August 19, showcases sculpture in a dizzying array of media.

In a video overview, curator Jessica Morgan highlights Fischer’s disassembly of sculpture. We have wax figures — men in modern attire and sunglasses, intricately molded bodies that could easily pass for marble — topped with lit wicks. The works slowly melt as time passes, decaying before visitors’ eyes.

Elsewhere inside the gallery, an entire house built from loaves of bread sits crumbling and presumably molding atop oriental rugs. “It’s quite typical of Urs,” Morgan says in the video, “to also make it slightly disgusting.”

The carb-heavy abode is set in front of a series Fischer called the “problem paintings” — large-scale headshots of movie stars obscured by garish, juicy fruit.

The Geffen is also featuring clay works made by the public, a collaborative effort by 1,500 Angelenos. These funny little masses strewn about the room include the head of a great white shark rising from the floor, Star Wars characters R2D2 and Jabba the Hutt, and a scene that resembles The Last Supper.

If that all sounds a little overwhelming, the cumulative effect is in fact intended to make the visitor feel more at ease than they might in a sterile gallery. The point of “the collage within the exhibition,” according to Morgan, is to bring “the atmosphere of the studio into the museum environment.”

For more on Fischer’s sly blend of Pop and Surrealism, check out the exhibition’s background info.