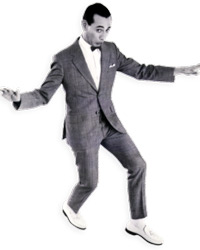 This weekend is your last chance to visit Chairry, Pterri and Pee Wee Herman himself at Club Nokia. I saw the show recently and grinned when the hyperventilating fan seated nearby squealed “NO! WAY!” as the familiar zigzaged and checkerboarded Playhouse set emerged from the darkness. I have to admit it was pretty magical to see these old TV friends appear before you in real life and three dimensions, even though the show runs about the length of three episodes of Pee Wee’s Playhouse. If I was watching at home I would have gotten up to make a sandwich, but the joy of the crowd around me was intoxicating and the parade of characters was nonstop. It’s hard to believe that the first Pee Wee Herman Show (1981) is now older than Pee Wee’s beloved 1950s educational films were when he made that first HBO Special. I really hope this helps get his new movie made, but might suggest that Pee Wee’s biggest adventures have always been outside the playhouse walls.