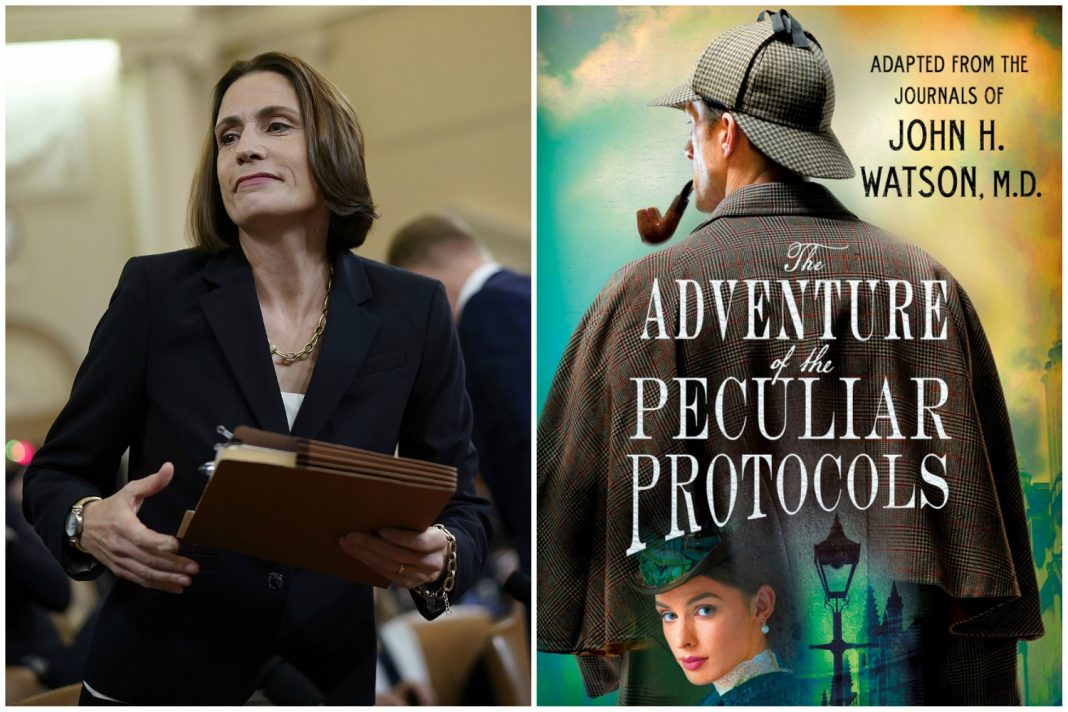 If you watched former White House analyst Fiona Hill testify before congress last week, you likely heard a timely and unintentional plug for Nicholas Meyer’s new Sherlock Holmes novel, The Adventure of the Peculiar Protocols. Hill compared conspiracy theories about George Soros to The Protocols of the Elders of Zion, a bizarre Czarist forgery more than a century old which still manages to hang around in Egyptian bookstores and the mind of Vladimir Putin. In his fourth Holmes novel, which hit the Los Angeles Times’ bestseller list in the wake of Hill’s testimony, Meyer returns to the moment of the Protocols’ birth and charges literature’s most famous rationalist with debunking this particular piece of “fake news” once and for all.

Meyer is notable for working in two sub-genres with rabidly obsessive fanbases: along with Sherlock Holmes, he’s co-written and directed three Star Trek films. (Both sides of Meyer will be on display at the Los Angeles Fantasy Society’s Loscon this Saturday, where he will be part of separate panels discussing time travel and Sherlock Holmes.) His first Star Trek film, The Wrath of Khan, is generally considered the best of the series, while his second, The Voyage Home, has long been a favorite of non-Trekkies. Perhaps the relatability comes from the fact that he never considered himself a fan of the series growing up and didn’t familiarize himself with it until he was tapped to write Khan. Not everyone was pleased: “When word got out Spock was going to die [in Khan], I got a note that ‘if Spock dies you die.'” But, he says, he knew that he could do it, so long as he did it well.

Meyer does Sherlock very well. His first Holmes novel, the 1974 bestseller Seven-Per-Cent Solution, was adapted as a feature film starring Laurence Olivier and Robert Duvall. In it, Meyer details the detective’s attempt to kick his famous cocaine habit, which Arthur Conan Doyle introduced in the second original novel, The Sign of the Four. Even then, “a lot of fans were troubled or offended by my depiction of Holmes as a cocaine user,” arguing that Doyle had intended the reference to a seven-percent solution of cocaine as a joke. For them, Sherlock’s habit diminished their hero. For Meyer, it humanized him.

That humanization is the key to Meyer’s Sherlock Holmes. Where previous 20th century adaptations had featured a humorless, dryly rational protagonist, Meyer imbued him with psychological depth. Meyer’s Sherlock gets clean by undergoing psychoanalysis with Doyle’s great contemporary (and noted cocaine user) Sigmund Freud. Meyer had been toying with the idea of introducing the two for years, ever since his father, a psychoanalyst, told him that therapy was a bit like detective work. “He always reminded me of Sherlock Holmes,” Meyer says. (I don’t write historical fiction, but I suspect that Freud would be pleased with the father connection.)

The Sherlock Holmes of The Peculiar Protocols remains just as dark as the cocaine-addicted analysand of Seven-Per-Cent. The mystery involves a spy who has been murdered trying to smuggle the supposed minutes of a Jewish conspiracy for world domination into England. Sherlock’s brother Mycroft, acting as spymaster, dispatches him and Watson on a journey that eventually takes them, via the Orient Express, to Russia. There, Holmes extracts a confession from a small-time printer in a one-sided game of Russian roulette.

Meyer started thinking about The Peculiar Protocols as a novel about forgeries. But, he says, with forgeries all roads eventually lead to the Protocols, and with them “all the romance of forgery falls away.” The Kishinev pogrom, which is at the heart of the novel, is a real historical event, one of many instances of violence attributable to the anti-Semitic rhetoric embodied in the Protocols. And forgery itself seems a lot less innocent now that it did a decade ago. “By the time I sat down to write it,” Meyer says, “I was knee deep in Trump yelling ‘fake news.’”

The Peculiar Protocols still has all the exuberance of the original Holmes novels—a train sequence that pays homage to Alfred Hitchcock’s The Lady Vanishes is a high point—but beneath the fun there is a certain bleakness that speaks to our present moment. While the novel isn’t exactly a roman à clef, Meyer doesn’t shy from playing up the contemporary references. The Protocols are in a sense the original “fake news.” They go viral the old-fashioned way, spreading westward from Russia via a series of trashy newspapers. The novel’s darkness doesn’t end with Holmes torturing the Protocols’ author, either. Instead, Meyer asks, what if the Protocols and deep state conspiracies are just vehicles for more elemental resentments? It doesn’t matter so much if you unmask what everyone already knows is a pretext. As Mycroft puts it, “people believe what they want to believe.”

Nicholas Meyer appears for an autograph session and two panels (“Time Travel: Why Are We So Obsessed with It” and “All Things Sherlock Holmes”) on Sat., Nov. 30 at LosCon 46, Los Angeles Airport Marriott, 5855 W. Century Blvd., Westchester.

RELATED: If Carl Bernstein Has Chills About the Trump Impeachment, He’s Not Saying So

Benedict Cumberbatch Is Back—And In Six Movies At Once

Banksy, Streisand, and Houdini: Three Great Nights at the Theater