Home Uncategorized Pay for Your Education with Wine, Avocados or Batteries? You Can Do... 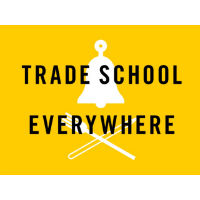 What if instead of hitting up your parents (or federal aid) for an obscene amount of money to pay for tuition, you could pay your professor after each lecture with a bag of groceries, a pack of guitar strings, or a bottle of wine? Big Education probably isn’t ready for a barter economy, but that doesn’t mean we can’t experiment with community-based learning on a smaller scale. Enter Trade School Los Angeles, a new barter-based community initiative that opened this month and focuses on democratizing knowledge and education.

The concept is simple: If you have a skill you’d like to share, contact Trade School and sign up to teach a one-off class. Students who take your class will pay you in whatever you ask for—as long as it’s not money. “People ask for all kinds of things,” says Leanne Pedante, a Highland Park-based designer and community organizer who founded Trade School Los Angeles. “Groceries, favors, a bottle of wine. Of course, this being Southern California, people bring a lot of lemons, limes, and avocados to barter with, too.”

“It’s a kind of a solidarity economy based on cooperation and mutual exchange,” says Pedante. She first came across the Trade School concept on the East Coast about five years ago and now teaches courses on exercise and design.

“Trade School was born in New York but there are chapters now in about 50 cities all over the world,” Pedante explains. “The idea is to develop cooperative opportunities and ensure that people have equal access to things even if they don’t have a lot of resources. There’s no money involved.”

Trade School Los Angeles’s website lists examples of what people have bartered for in other cities. Isabel taught basic Chinese in Mexico City and asked for tea, ink, and pencils. Felix taught a WordPress class in Barcelona and asked to be paid in guitar strings. Kathleen taught Law 101 in Indiana in exchange for bike parts, a couch, or donations to charities.

The school doesn’t operate out of a set location. The classes offered thus far have either taken place in public venues or at people’s homes. “We have about 32 classes scheduled this month,” says Pedante. It has, in keeping with the school’s ethos, been a DIY situation.

Pedante already held her own class this month. “I taught a class on how to formulate your own workout schedule without equipment and weights,” she says. “We all got together in a park in Highland Park and I taught them some basic exercises and then we did a hike afterwards.”

“It’s a pretty broad range of people who teach and take classes, which is ideal,” Pedante says. “It’s supposed to feel like it’s representative of the larger community.”

Pedante has so far taken a class on writing your social media bio and a class held at Lincoln Heights arts collective HM157 on acrylic painting.

“One thing I personally look forward to is the ‘How To Talk About Art’ class,” she says. “It’s taught by a gallery teacher from LACMA and the idea is to make art more accessible to people by working on ways to talk about it, which can be intimidating.”

Accessibility is what Trade School L.A. is all about. “It’s about sharing skills,” Pedante says, “but ultimately the most important thing is getting people to engage with their community.”