Home Celebrity At 50, Pauly Shore Is Looking for Happiness Where He Can Find... 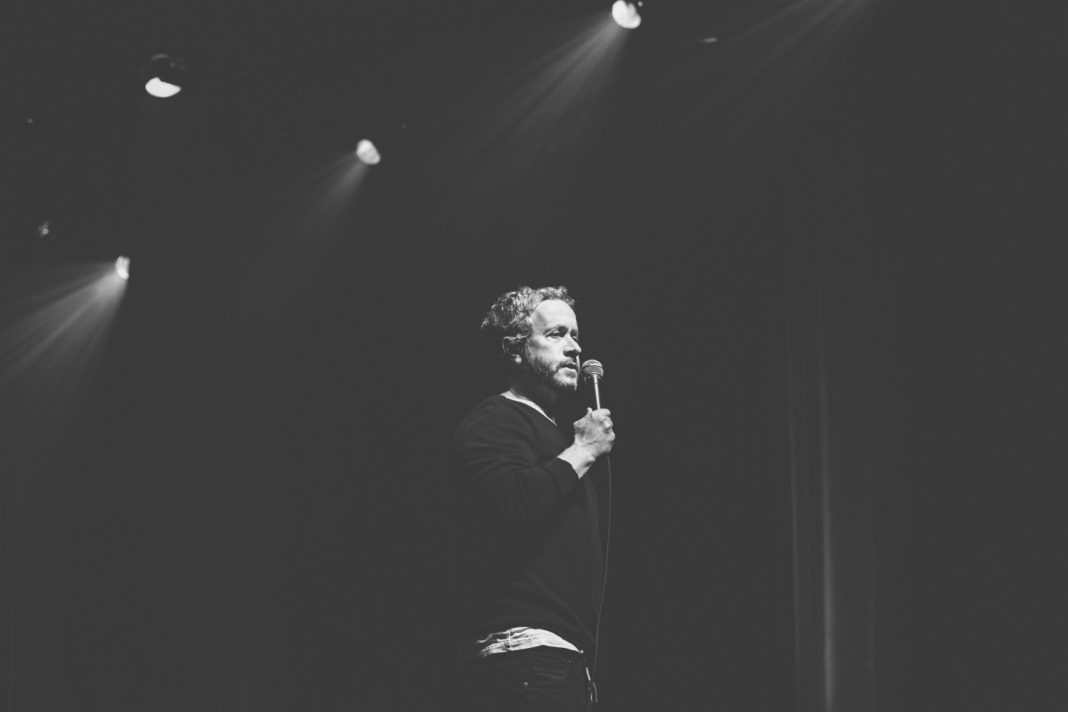 Sitting at a table in a cruddy-cool Silver Lake café, Pauly Shore is crying. He pushes away his breakfast, overcome with emotion as he recalls a trip to Jerusalem he took last summer, shortly after his mother, Mitzi, passed away. “I went there to be with her,” he says. As L.A.’s comedy community mourned the loss of its matriarch, Shore set off for Israel to mourn his mom. He was primed for a few rabbinical confabs and the world’s realest falafel, and then he went to the Wailing Wall. “I felt I was home,” he says. “I cried a lot.”

Despite the somber conversation, Shore is dressed like the grown-up version of the funny guy people remember from a spate of early ‘90s comedies for the MTV set. The morning we meet up he’s wearing a ball cap, a blue sweater, and an orange camo necktie; his yellow T-shirt is emblazoned with the phrase “Winnie the Jooh.” The next day, he’s set to go back on tour for the umpteenth time, taking him away from more urgent daily concerns like the Comedy Store, which Mitzi named him the manager of in her will; his acting career; his father Sammy’s health. Now 50, he has another pressing item on his agenda: figuring out what Pauly Shore’s third act looks like.

After 30 years as a comedian, it’s become a relief to take his act on the road, where the people of America want nothing more than to see their old hero. “Colorado Springs,” he says, “is going to be nothing but love. That’s how my whole tour is. Those are all people out there who just love the guy from Son in Law.”

If Shore’s “silly” first act (wheezin’ the juice, Kenny G curls) was a blitz of slapstick movies and suffocating popularity, then his second act was a tornado of hard left turns that included a faux documentary about faux suicide; a quasi-political Showtime special; and a sobering look into Mitzi’s battle with Parkinson’s.

Today’s Shore has already begun metamorphosing for the next stage, which he believes “is supposed to be happy.” To commemorate this, his hair is now blond, short, and wavy. He goes to the Korean spa and Gold’s Gym “every day” for self-care. And he’s just completed the mother of all hard lefts: a Youtubeable horror film, Sin City Psycho, in which silly Pauly finally gives way to writer-director-serial killer Pauly.

The idea originated with a 90-page script co-written with Tommy Tallarino, before being (wisely) whittled into an 11-minute two-hander set in a hotel room in Vegas. Shot by Michael Su in watermelon neon—pinks and greens and viscous blacks—it would not look out of place as part of Twin Peaks: The Return. For Pauly Shore, it’s the project of his lifetime.

“It was clear to me that in his imagination, Pauly envisioned every beat of the story,” says Sharon Gardner, the only other actor in Sin City Psycho. Gardner describes their working relationship as “generous,” “collaborative,” and “grounded” by hours of rehearsal and their shared acting coach, Warner Loughlin. Gardner’s character, Tiffany, is likely the most complex female character ever in a Pauly Shore movie.

I ask him why that’s the case. Was is a response to his mom’s passing? To our shared political environment? To the challenges of being 50 in a youth-obsessed industry? “I don’t know,” Shore says with a shrug. “If you’re an artist, you have something that is inside of you that you have to get out. It’s almost like…I don’t want to say taking a shit, but it is almost like that, you know what I mean? Making movies and acting [are] inside of my soul—that is part of the reason why I’m not married with kids and all that.”

With that, Shore leaves the café where we ate and ducks directly into another. Later, he prepares to make Colorado Springs laugh while he sorts through his new role at the Store and the new house he is building and the documentaries he has “in the can.”

When that’s all done, he hopes something remarkable will come along: “A play on Broadway” maybe, or “the third lead in a Quentin Tarantino movie.” Until then, the Korean spa will have to do.