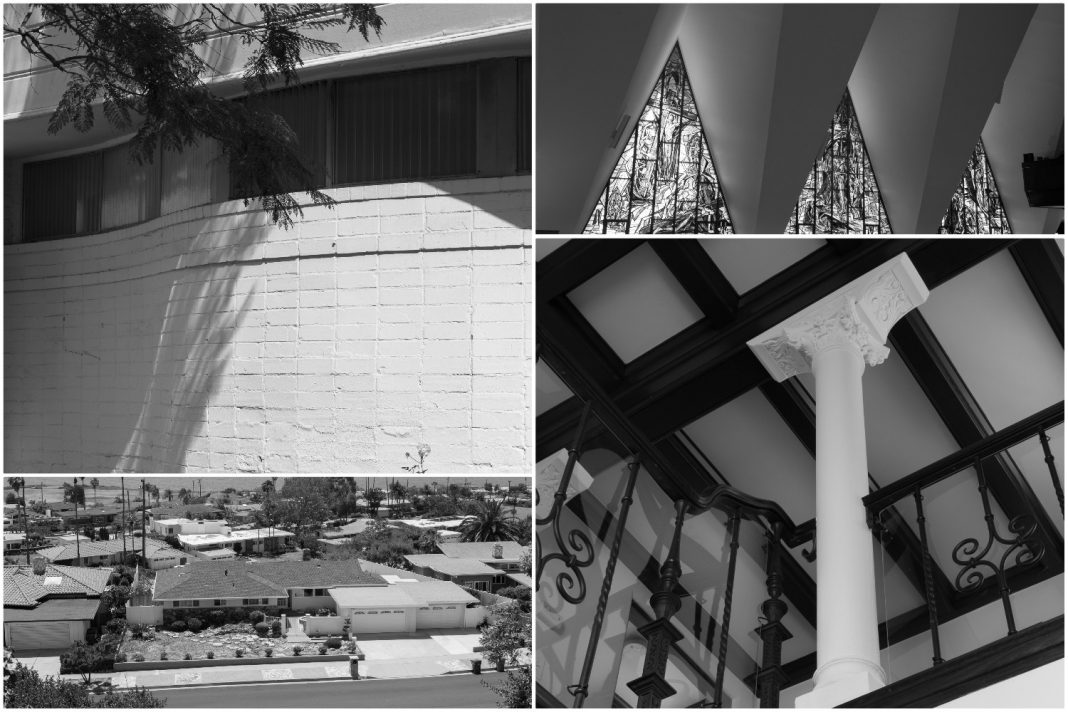 For photographer Janna Ireland, the essence of legendary mid-century Los Angeles architect Paul Revere Williams is in the details. In her new book of photography, Regarding Paul R. Williams: A Photographer’s View, Ireland trains her camera’s crisp eye on the intricately carved banister of a mansion staircase, the cross-patterned breeze boxes of a church, and the sun pouring into a mausoleum’s windows illuminating the smooth marble interior. And then there are the homes—Craftsman, Colonial Revival, Modernist, Hollywood Regency, and Spanish Revival. Every conceivable style and size, all pulsing with the perceived solidity and optimism of the California dream.

For his own home, built in 1952 in L.A.’s Lafayette Square neighborhood, the first licensed Black architect west of the Mississippi designed an elegant, modern structure with “W” emblazoned on the wrought iron gate and, inside, distinctive honeycombed ceilings. Ireland captures these stylish and substantive details in stark black and white.

“I most admire the way that he uses curves. They were kind of functional curves in things like staircases and in doorways, and then there are a lot of curves that are just decorative curves that he…built into ceilings,” Ireland explained in a conversation with architect Barbara Bestor at her virtual book release party on September 13. “I love finding the curves. Another little detail that I love finding is his pocket doors, the doors that slide into the wall instead of swinging in or out—I find those in lots of places. Those are always kind of a delight to find.”

Originally from Philadelphia, Ireland moved to Los Angeles in 2011. She has a BFA from the Department of Photography and Imaging at NYU and an MFA from the UCLA Department of Art. Her work has appeared in publications including the New Yorker, Harpers, and Aperture, and she was the 2013 recipient of the Snider Prize, an award presented by the Museum of Contemporary Photography in Chicago.

“Much of his work was in neighborhoods, for neighborhoods, he couldn’t even go in,” Ireland told Bestor. “There’s always the fact that he…might have been designing in a neighborhood that he couldn’t live in…I haven’t figured out really what that means yet, but it’s certainly not neutral, right? That he was doing this work for clients who couldn’t necessarily respect him, or who wouldn’t have wanted to be friends with him, or who he wouldn’t have wanted to be friends with, but…he built this entire career.”

For Williams (1894-1980), dealing with the racism and bigotry he encountered during his decades-long career in L.A. became a motivating factor. “At first, I could not understand but gradually came to realize that I was being condemned, not by a lack of ability, but by my color,” he once wrote. “I passed through successive stages of bewilderment, inarticulate protest, resentment, and finally, reconciliation to the status of my race…Without having the wish to ‘show them,’ I developed a fierce desire to ‘show myself.’”

Show himself he did. Eventually the head of one of the top architecture firms in California, Williams is credited with designing around 3,000 structures. In the era of Jim Crow, he became known as the “Hollywood architect,” designing homes for Barbara Stanwyck, Frank Sinatra, Cary Grant, and Lucille Ball and Desi Arnaz. He also worked for numerous African American clients, including Bill “Bojangles” Robinson, the Angelus Funeral Home in Historic South-Central, the First African Methodist Episcopal Church in Adams-Normandie, and the iconic Golden State Mutual Life Insurance Building on West Adams Boulevard. And he designed portions of the famed Beverly Hills Hotel, including its iconic logo and the Fountain Coffee Shop (known for its banana leaf wallpaper and curved counter).

“The variety in his work really suggests that he would take anything on… He was just kind of up for any challenge in terms of style, in terms of scale,” Ireland said. “He designs homes, he designs public housing projects. He designs enormous structures and teeny tiny ones. I just admire that willingness to tackle different things…I think of it almost as maybe a game he’s playing with himself, like, ‘Can I do this? How am I going to design this? Can I give them exactly what they’ve asked for? Can I outdo their expectations for this project?’”

Ireland, who has photographed Williams’s structures for the past four years, most loved shooting the Williams-designed memorial mausoleum at the Westside Jewish cemetery, Hillside Memorial Park (where he also designed the Al Jolson memorial). It was the stillness of the mausoleum that appealed to her—a unique place to observe his work in peace and quiet.

During Ireland’s sessions in various homes, offices and administrative buildings, she was often focused on what momentous historical events were happening during the time Williams was designing the structure. “I’ve asked myself many times whether I would have been able to do what he did, whether I would have been able to put up with what he put up with,” she said. “I really admire his perseverance.”

In her book’s foreword, Ireland contemplates what Williams means not just to Los Angeles, but to her family and, most importantly, her two young sons:

“It is not the beauty of Williams’s work that inspires me, though it does bring me a lot of pleasure. It is the thought of him grinding day after day in this city, patiently building his practice, and proving his detractors wrong that makes me return to his work. My photographs of Williams’s buildings are as much a tribute to his labor and persistence as they are a tribute to his talent. I am proud to live and work in Paul Williams’s city. If Williams could become one of the most notable architects of the twentieth century here, what can my children become in the twenty-first?”

It is a question she will continue to try and answer. Though the book may be completed, Ireland is far from done with Paul Williams. She recently photographed a private home he designed in Ojai, switching to color film for the session. She plans to continue her photos of his structures, regarding him with her cool, practical, elegant eye. But asked if she would like to live in a Paul Williams house, Ireland said no—at least not until her children are older.

“It would be too much pressure,” she said with a laugh.