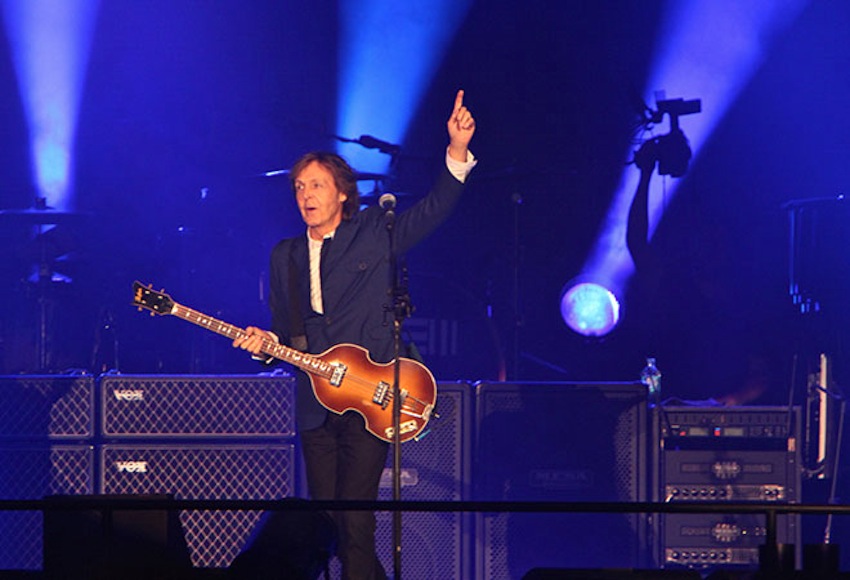 A few things have changed since that day 48 years ago—the priciest ticket in the house went from $6 to $250, the screaming girls are now screaming grandmothers, and the 27-minute set from the Fab Four was replaced by a three-hour journey through Macca’s life as a Beatle, a member of Wings, and a solo artist.

McCartney’s jukebox of hits is far too full to play all of them in one night, but his 36-song set put forth a valiant effort: He played Beatles classics like “All My Loving,” “Blackbird,” “Eleanor Rigby,” “Hey Jude,” “Let It Be,” “And I Love Her”; Wings greats like “Live and Let Die,” “Band on the Run,” “Let Me Roll It,” and “Listen to What The Man Said”; and solo smashes like “Maybe I’m Amazed.”

McCartney also performed a handful of songs off his latest album, New, but he knew his fans wanted more Beatles and seemed to delight in giving it to them. He delved into quirkier tracks like “Ob-La-Di, Ob-La-Da” and showcased famous B-sides like “Helter Skelter” and “I Saw Her Standing There.” Those hoping to hear less popular gems like “Yes It Is” or “Rain” could be the only ones mildly disappointed with the evening. Well, unless you were wishing for the rumored Ringo Starr appearance, which would’ve been a joy. Dave Grohl was also on the shortlist of McCartney’s musician friends who live in L.A., but there were no cameos (Kanye West stood next to us for a while, if that counts).

Macca paid tribute to George Harrison with a sweet ukulele version of “Something” and to John Lennon with the emotional “Here Today,” written in the form of “a conversation we never had.” As another nod, he also sang Lennon’s “Being for the Benefit of Mr. Kite!”

After “Back in the USSR,” he told stories of how unbelievable it was to play Red Square in 2003, especially given the country’s longtime resistance to Western rock.

“I was talking to the defense minister—the defense minister!—and he said, ‘First record I ever bought was ‘Love Me Do,’” McCartney said, putting on his heaviest Russian accent. He said another official told him “we learned to speak English from Beatles records. Hello goodbye!”

While all the talk the former Soviet Union may have gone over the heads of the youngest crowd members, there were certainly plenty of them in attendance. Diverse multi-generational families filled the stadium, speaking to McCartney’s knack for cross-generational appeal. Hippies and hipsters find common ground in Macca, it seems.

Some things, though, haven’t changed since 1966. A few young women leaned against a railing, hands on their faces, yelling out for McCartney. The crowd held up signs like “43rd year, 43rd concert,” “Sign my mom’s arm for her only tattoo” (he granted that one by bringing the fans on stage), and—there’s always one of these—“Sign my butt.” (“Well, let’s have a look,” he responded.)

Shaking his hips, striking poses and taking no intermission, McCartney showed he remains downright jaunty at 72. His career shows no signs of slowing, and there’s no trace of his recent bout with a virus he picked up in Japan, which caused him to postpone a number of tour dates.

“I get the impression you want to keep rocking,” he said with a sly smile during the second encore. Admit it, Paul—that’s what you want, too.