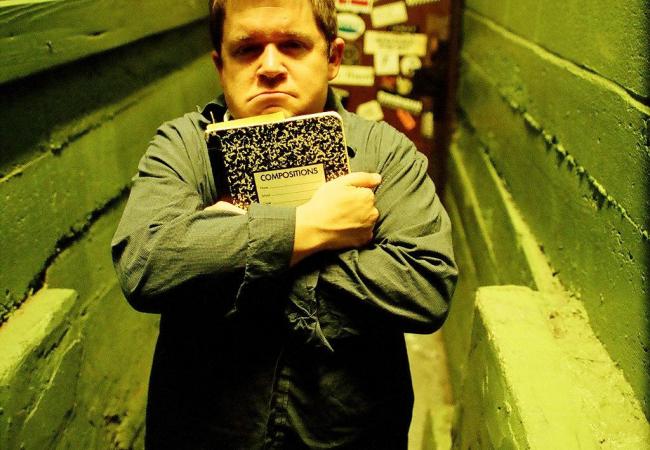 Ready to detox from all those wishes of peace, love, and goodwill? Thank god for comedy. In specific, thank god for Patton Oswalt. In addition to his January 4 performance at Largo at the Coronet, he’s releasing a standup special, Tragedy Plus Comedy Equals Time, on January 17 on EPIX. The 175-minute show was shot in July in San Diego; it will be available on CD and DVD this spring.

Instead of a winter of discontent, it’s been an illustrious one for Oswalt. We caught up with the funny man to chat about his upcoming show, his love for the Largo, and his turn as an incredibly helpful customer service rep in The Secret Life of Walter Mitty.

How has your material evolved over the last few years?
I can’t speak for other comedians but my material takes a turn every day. If you’re a comedian and you’re trying to be present in your life, it’s just your life that you’re translating through jokes.

You’ve performed at the Largo a lot over the years. What is your relationship with the venue?
When it was on Fairfax I really, really liked it. I became friends with Flanny [Mark Flanagan] and it became a crucial venue for me. It’s an amazing place to perform and it’s miraculous that it still survives. Initially, when it moved from the Fairfax location to the larger space, I was like, “Oh, the intimacy with the tables and the people is gone.” But because it cultivates crowds that will follow you when you’re doing new and risky things, the intimacy is there on a much larger scale. That sounds like an oxymoron but it isn’t.

Mark once said in an interview that one of his favorite Largo shows was a performance by you and Michael Penn.
It was acoustic vaudeville with Aimee Mann and Michael Penn. Michael and Aimee hate doing banter, Michael especially. His songs are so dense and smart, he’d much rather focus on them. Michael would pretend he couldn’t speak English and do really excited banter in this other language. I would translate it into stuff that made no sense or into the worst rock and roll clichés. Or I’d sit in the audience and I’d be the classic fan you don’t want: the fan who knows your material so well he’s yelling out stuff in the middle of your set.

There’s always one person like that. Usually it’s a dude.
It’s their time to show off what they know. He’s the guy who knows all your stuff, who’s sitting there yelling, “Do the guy in the black pants song.” He wants to hear what he wants to hear, and he thinks it’s all for him. Michael Penn has very obsessive fans. It was fun to distill them all into one personality and crank that up to a ludicrous point. What if he had no sense of voice modulation or social boundaries and was lethally comfortable in his own skin? It’s like I wish you weren’t as comfort with yourself. I wish you had a little shame and discomfort. Quite frankly, that would do you—and society—a lot of good. They’re too enthusiastic, but it’s hard to get mad at them.

Largo also manages to cultivate a great atmosphere.
You curate the audience as much as you curate the performance. If there are people on their cell phones, Mark will just kick them out, even if they’re journalists. They’ll say, “Do you know who I am? I’m going to write about this!” And he’ll say, “Please! Please write that article. It will only get more acts to want to perform here.” At the Largo, the customer is always wrong and it’s a beautiful thing.

It’s also this weird thing. I know this is going to sound like I’m being an old fart. Hecklers have always been awful but we literally have a lesser class of hecklers. Because of the Internet, they think they’re supposed to talk and comment and have a voice all the time. I am actually nostalgic for the old days, when hecklers were at least listening to you and were at pissed off about something you said. Now, they might not even be talking about you.

I was in New York at a club and needed to run a set for a producer who just wanted to time it, so we went to a bunch of clubs. At one club there was a table of women in the front row yakking. But I’m just running the set for time and it doesn’t matter so I ignore them, and one woman says, “You know, you’re not even fucking listening to us. We’re talking over you and you’re supposed to be yelling at us.”

What did you do?
I said, “You’re right. I don’t know what to say. You’ve just stated an absolute concrete fact.” So the only thing I could do is go, “Yup.”

Has the Internet changed comedy?
I think it has made comedians, especially younger comedians, very conscious of how funny even non-comedians are, so they don’t go for the first or second joke. They’re learning to go for the ninth or tenth or eleventh joke. It’s creating comedians who are much stronger at a younger age.

When did you start performing with Michael Penn?
I met him and Aimee at Largo in the late ’90s and we remained friends. He’s a brilliant, funny guy. I was always a fan of his albums. Everything good that came out of Largo came about organically.

Is it tricky to transition between music and comedy?
We kind of don’t think about that. Sometimes if the transition is clumsy, it’s even better because you get a laugh out of that.

What is your best experience performing at Largo?
One night I was performing at the old Largo. During the whole show there was this jackhammer. Every comedian went up and although we were watching each other’s sets, we worked the jackhammer into our bits independent of each other. The whole theme of our show was comedians trying to work while a jackhammer was going. It was a great experience; you had to be there.

There are so many. Every Monday night was crucial to me. You were getting to watch all your friends at the height of their powers. There’s a level of narcissism in what we do. It was a room where I wanted to go to even if I wasn’t performing. Everyone that’s coming up right now has a touch of Largo to them. All the young comedians take their cues from it.

Beyond the great shows, what’s really valuable about the Largo is the influence it has had on other comedians. I don’t think Comedy Bang Bang or Sleepaway Camp would have existed without Largo. It all comes back to Mark—and to Beth Lapides of Uncabaret. They influenced a whole generation of people who put together these shows.

You are in The Secret Life of Walter Mitty. What was it like working on that project?
It was fun. I’ve known Ben Stiller for a long time. It was great getting to be in a movie like that and seeing how gorgeously detail-oriented he is as a director. I think he has invented the genre of epic comedy. I’m not going to say yet what I’m doing in the movie, but I’ve seen it and I was blown away that I got to be in such a great movie.

I’m sad I never got to see you do The Day the Clown Cried. Will you ever do it again?
No! NEVER EVER! I would absolutely never do that again! Why would I ever do that again? We did a bunch at Largo. We got an offer from the Powerhouse Theater in Santa Monica and it got written about in LA Weekly so it got shut down. Did I do some in New York? Who knows? Had I done it, I would imagine it was hilarious. I would speculate it was all of the best comedians—David Cross, Toby Huss, lots of other people—but who knows if it really happened?

Do you like working on projects that aren’t comedic?
I just like working on anything that’s good. I don’t really worry about the genre. I just think: Is this person doing something new? All forms of art are open game for me.

Review: Dark Comedy “I Love My Dad” Is Uneven But an Acting Showcase