Home Outdoors Hiking Where to Find Pasadena’s Portal to Hell, and What to Do When... 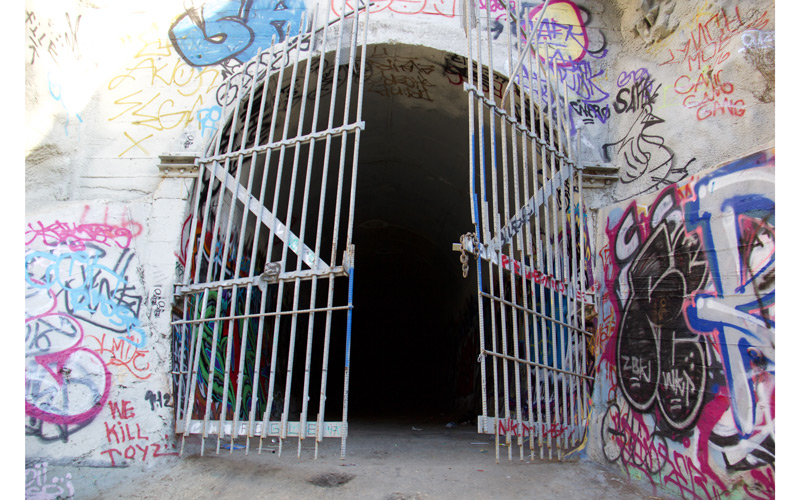 So it turns out that way deep in Pasadena there’s a portal to hell. Yeah, I know. I would have guessed Hollywood, too. But no, it’s in sleepy, peaceful Pasadena: a long, dark tunnel that leads to the fiery lake of the damned. Or so the story goes.

How to Get There

Aside from all the brimstone, it makes for an excellent weekend excursion. Pretty much just punch “Devils Gate Dam” into Google Maps, and you’ll get there. Park in the neighborhood at the end of the route, then follow the La Cañada Verdugo Road to the end of the cul-de-sac. After that, hang a right down the old road to the dam.

Once you’ve reached the dam, you’ll see a tunnel on your left. Go through it. (That’s going to be a recurring theme here: See a tunnel; go through it.) When you emerge on the other side, there will be a gate directly in front of you. At that point, you’ll have two choices.

Take a left and follow the trail down the hill and past an old utility worker training course. You’ll then trek up the (hopefully dry) stream bed to a duckweed-choked pond in the shadow of the 210 freeway. Look straight ahead and you’ll see it—an outcropping in the rock that looks uncannily like the head of a demon, in profile, horns and all. The Tongva tribe had long been wary of the place, but in 1920 the L.A. County Department of Public Works came in and dug a long dark flood control outlet right at the base of the ominous visage.*

* Hey, seemed like a good idea at the time.

Backing up a bit in this choose-your-own-adventure, you have a second option once you emerge from the first tunnel: the stairs.

Step through the gate, proceed down the stairs, descend two harrowing ladders (yeah, ladders—so wear appropriate footwear), and boom, you’re there—standing at the mouth of a dark tunnel that leads God-only-knows where. In the past, massive iron gates have blocked the entrance, but as of this writing they hang ajar. Will you go in? Absolutely. Will you come out again? That’s up to you, or possibly Satan.

The Portal to Hell

There are plenty of creepy urban legends about this place, and most of them center around JPL co-founder Jack Parsons and Scientology founder L. Ron Hubbard. Did Parsons and Hubbard try to conceive some sort of antichrist to overthrow the cosmic order? I mean, what else you gonna do there? Did they also—as infamous occultist Aleister Crowley purportedly claimed—open one of seven portals to hell on this site (the others presumably being located in Bed Bath & Beyonds across the nation)? There’s only one way to find out.

If you enter the tunnel and walk into its depths, and if you keep walking all the way to the back, you’ll be confronted by a pair of solid metal sluice gates. If you listen closely, you might be able to hear the anguished cries of all Dante Alighieri’s political rivals and the booming, cartoonish laugh of Satan himself. Or you’ll just hear the faint trickle of water.

But you never know. Skim the Yelp reviews for Devils Gate (it has four stars). You’ll come across some eerie stories. As Savannah S. puts it, “If you want to feel like your death awaits you, this is the perfect place!”

RELATED: There’s an Ornate Temple in This Far-Flung Suburb