Home Pop Culture Parks and Rec Fans Can Thank This Musician-Comedian for ‘5,000 Candles in... 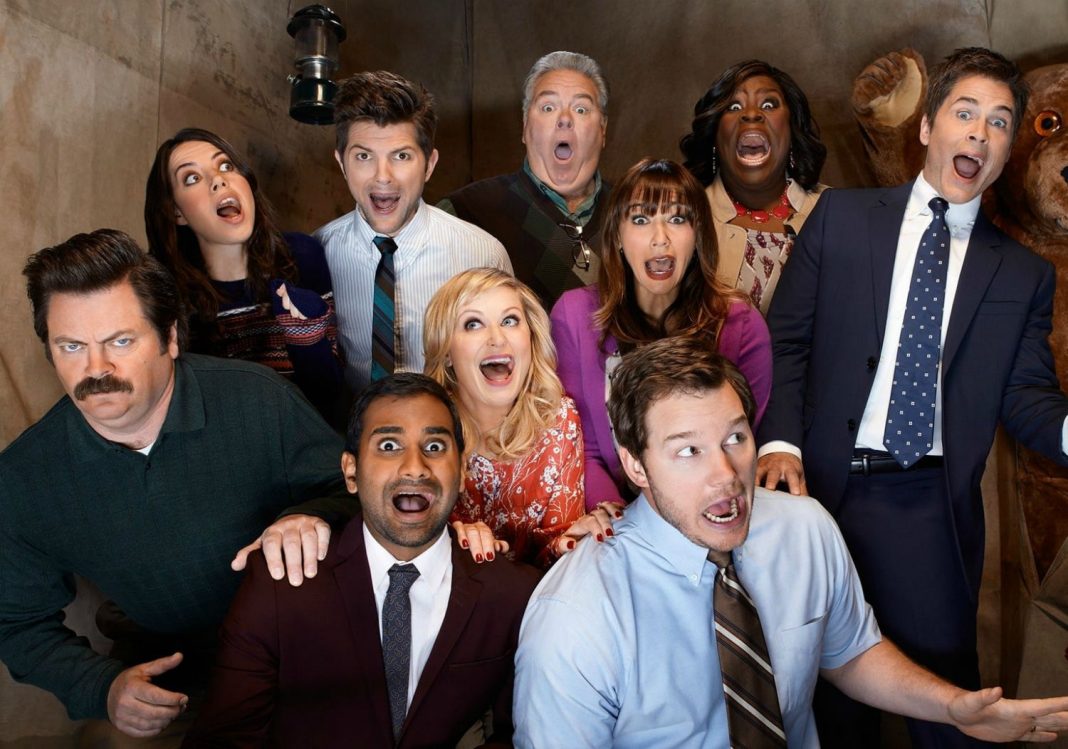 The biggest emotional wallop of last night’s Parks and Recreation Special was arguably the entire cast singing along to the song Andy Dwyer (Chris Pratt) wrote in tribute to miniature horse and Pawnee legend Li’l Sebastian: “5000 Candles in the Wind.” The real-life songwriter who made that catchy, absurd, now nostalgically moving ballad is Mark Rivers.

Rivers got his start playing in rock bands in Boston, where he met a bunch of what he calls “young, struggling comics” like David Cross, Marc Maron, and Janeane Garofalo. Cross wound up asking him to write the theme song for HBO’s sketch show Mr. Show with Bob and David—which led to a rich dual career of writing comedy scripts as well as comedy songs for shows including Jimmy Kimmel Live!, Kroll Show, and Big Mouth. He wrote—and performed—most of Mouse Rat’s—Andy’s band—songs on Parks and Recreation, and even played Andy’s drummer onscreen. (He also wrote anchorman Perd Hapley’s theme song and the tunes on Andy’s TV show, Johnny Karate.)

Following last night’s special, we caught up with Rivers to discuss how he landed the Parks and Rec gig, what it was like writing for Andy, and why the show is still so special.

How did you get the job on Parks and Rec?

Aziz Ansari brought me in because I had done some songs for some of the later seasons of Human Giant. My friend Tom Gianas brought me into that gig. We all had a lot of mutual friends in the comedy world.

Were you mainly brought in to write the songs for Andy and Mouse Rat?

Yeah, I guess because I had a comedy background and also one playing in rock bands. I didn’t come from the more stuffy world of orchestral composing or whatever. I was the kind of person they were looking for.

What was your model for Andy and his band’s style?

Mike Schur really wanted to dial it into, like: They’re not terrible. They don’t sound bad. They’re competent. … It’s just bad corporate rock. There’s no imagination. He’s smart, and he has bad taste. The examples were all those ’90s, sort of corp-rock-sounding bands—I guess I shouldn’t be too specific, but we all know the genre [laughs]. And the way he sings the songs, too. He does that third-string grunge-rock band—like the worst version of Eddie Vedder.

You told me before that the secret to writing Mouse Rat songs was to write them in real time and then don’t change anything.

Yeah, exactly. I had to resist my songwriter’s instinct to go back and, like, “Oh, it’d be cool if I go to this cool minor chord for the B section. …” No, no, no. Just do the most straight-ahead, flattest, unimaginative [thing]. … It needs to sound like Andy wrote it, and he probably wouldn’t have the attention span to make himself go back and rewrite and rethink and perfect anything [laughs].

“The Pit” was Andy’s first anthem.

I’d forgotten about “The Pit.” They brought me in to write that, and then a handful of other generic Mouse Rat songs. They wanted a song called “Menace Ball” [laughs], and it’s all terrible lyrics like [sings like Andy]: “I know you’ve been changing. I’ve been changing, too.” Ugh, God—they just make your soul tired.

Is Chris Pratt a good singer and guitar player? How much of that does he do himself?

Yeah, he’s a passable guitar player. I think he plays more like fingerpicking style and country music stuff. He didn’t play in rock bands. He’s very self-taught. But yeah, he’s a decent enough singer—certainly compared to other actors I’ve worked with. He’ll hear it, and he can get it on key.

When we see the band onscreen, are they miming along to your prerecorded track?

Yeah, generally. I think a couple of times they actually used some of our live recorded stuff and blended it with the two—pretty nicely, I think. But generally they’re playing the right chords just to the track. It looks pretty good compared to some bad band lip-synching that I’ve seen in the past. These guys are at least playing the right parts.

And is it you performing most, or all, of the parts on the tracks?

Yeah. I am basically the sound of Mouse Rat. There’s one song that I didn’t write—I was out of town, I was working in New York—the song when April and Andy get married. That was the most screen time, by the way, that the Mouse Rat drummer has ever gotten, and it was a guy standing in for me. He’s prominently on camera the whole time. All of the scenes I’m in I’m blocked by one of the other band members. I think he was like the better-looking version of me so they just decided to feature him.

Is that real saxophone on “Catch Your Dream”?

It is, yeah. I always bring my ringer saxophone player, Jay Work, in to play. I’ve been using him for years now. But Nick Offerman plays sax, you know. So there, too, we’re lucky that he’s actually a competent enough saxophone player so that you don’t get some guy who looks like he’s miming on a golf club or something.

Were these songs written into the script with lyrics or just a general “here’s what it should be about”?

For the early Mouse Rat songs, where they just wanted us playing generic rock songs, they just me run with it and write generic lyrics. “Catch Your Dream,” the one that becomes Leslie’s campaign anthem, they told me they just wanted a typical John Cougar sort of inspiring song. … They just gave me a general direction and I ran with that lyrically and stylistically. “5000 Candles in the Wind” was the one case where they gave me pretty intact lyrics. They had a very clear idea of what they wanted from that lyrically.

But I had somehow overlooked the earlier episode when they introduced Li’l Sebastian so in explaining it to me they were like: “Well there’s this miniature horse that’s the town hero.” And my reaction was what the Ben character’s reaction is: “He’s what? OK. If you say so.”

There was a joke we hit on: that all of Andy’s songs are in the same key. Every song of his is in G, because he finds his key and he just sticks with it. And there’s also a running joke through all the songs: At some point I started including the phrase “spread your wings and fly away,” so that figures into almost every Mouse Rat song. That became a really obscure inside joke.

It’s funny that the mandate for these songs—“5,000 Candles” and “Catch Your Dream”—is that they have to be the greatest song ever written in the history of the world.

It was great hearing the second verse of “5,000 Candles” last night. (“And though we all miss you every day/We know you’re up there eating heaven’s hay./But here’s the part that hurts the most/Humans cannot ride a ghost.”)

It’s amazing to me that these songs are really funny and work for the story, but they’re also really catchy. What’s your secret?

It’s weird. I guess [“5,000 Candles”] was one where I did spend a little more time than Andy would have spent on it. I guess the idea would be that Andy had this very inspired moment. He really put some heart into that one because there are, I guess, clever minor chords that might be a little above his level writing-wise. But I didn’t realize what a sort of cult hit it had become until well after the series had finished airing.

I write these songs for Nick Offerman—we collaborate on songs for him to sing for these live tours that he does. And he closes with “5,000 Candles in the Wind.” I had known that, and I went last year to see him at Largo. I took my mom, and she had never heard the song or watched Parks and Recreation. And she and I were both surprised when he introduced the song at the end, and the audience went [gasps] “Oh!” and they all sang along. That was the first time I realized, “Wow, people really paid attention to that song.”

What last night’s special showed is that as absurd as it is, it was really emotional with everybody singing along. You probably never intended that.

[Laughs] I know. It’s kind of ridiculous. I mean it sounds like a pretty anthem. I guess, musically, it fits the moment in the script in the reunion. Lyrically, of course, it’s just entirely too specific about a dead horse.

Yeah, it’s a good joke. I wish I could say I thought of the joke.

Well you made the joke sing.

You know, we’re watching the show for the first time with my kid, and I’m seeing these things. I had watched the show very piecemeal and had caught them way out of sequence, and it’s really fun to watch them all in order now. Seeing how things build up to these moments, and how these episodes fit together as they were meant to fit together—it’s satisfying on a new level.

Why do you think it’s such a special show?

I don’t watch that many network comedies anymore. But little moments will jump out at me as like, “Wow, that’s a really funny, weird joke for a network sitcom.” It catches me by surprise every now and again how they got away with writing such smart, creative comedy. Also it’s very character-based as any good comedy show is, I think. These people really deliver on those characters, and the writers wrote very well for those characters. I think it’s just hitting on all levels.

And the show has a “no dicks” rule. I think that’s Mike Schur’s credo: don’t work with any assholes and bring in only people who you want to see every day. I think that makes a huge difference. I’ve certainly worked on shows where you feel pressured and stressed, and there are people you don’t want to be around. And that show didn’t have that vibe. I think he created it that way. And that goes a long way.

RELATED: The Complete Parks and Recreation Guide to Los Angeles