Home Art A Local Teen Created the Most Beautiful Tribute Art for March for... 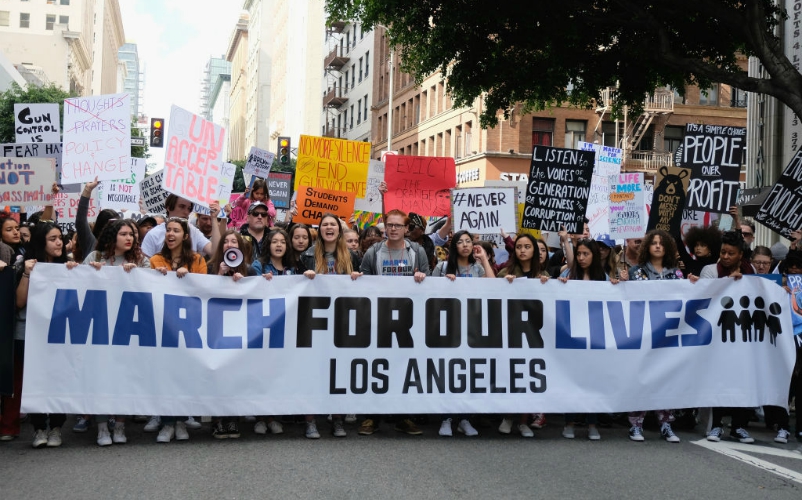 On Saturday, young people and their allies gathered in cities all over the country to take a stand against gun violence and to advocate for change in the form of stricter gun laws. Organized in part by high school students in the wake of the deadly mass shooting at Marjory Stoneman Douglas High School in Florida last month, March for Our Lives drew approximately 55,000 people to downtown Los Angeles alone, where it culminated in a rally with celebrity speakers and musical performances.

Amid the masses carrying posters declaring, in one way or another, that the current generation of students won’t stand for another mass murder at the hands of a gun wielding perpetrator, a group of people in orange T-shirts carried signs bearing portraits of each of the 17 students and teachers who were killed when Nikolas Cruz opened fire in his high school on February 14: Alyssa Alhadeff, Scott Beigel, Martin Duque Anguiano, Nicholad Dworet, Aaron Feis, Jaime Guttenberg, Chris Hixon, Luke Hoyer, Cara Loughran, Gina Montalto, Joaquin Oliver, Alaina Petty, Meadow Pollack, Helena Ramsay, Alex Schachter, Carmen Schentrup, and Peter Wang.

The portraits were hand drawn by a local 16-year-old named Gracie Lee Pekrul, who began posting them on social media individually on February 21; each is accompanied by a short biography that details the victim’s interests and future aspirations. Here’s a portion of the statement she posted to Twitter:

I am sixteen, about the same age as many of the students [who] lost their lives during the Parkland shooting. I was deeply affected by this tragedy because the fourteen students who lost their lives remind me so much of myself. They were young adults with big dreams and big aspirations, who had so much life left to experience. They had loving families and friends who are now overcome with grief and heartbreak. They went to school to learn and grow and acquire the skills to conquer the world. They did not know that their school would become a battleground in a matter of minutes.

Watching the survivors stand up and speak out has inspired me to demand change. They are not only brave, resilient, and empowering activists, but they instill others like me with the courage to join their fight. It gives me hope for adolescents in this generation.

To contribute to the cause, I decided to do a drawing and short biography of each of the seventeen victims. They were extraordinary human beings with extraordinary stories of heroism and kindness. I wanted to share their stories with the world so people can understand what we have lost. They were not only kids, but they were future doctors, scientists, service members, Olympic gold medalists, and activists. They were not only teachers, but they were friends, parents, daughters, sons, brothers, and sisters. They are not another simple statistic. They are life-saving heroes.

Many MSD students and families of the victims have reached out to me, telling me that my artwork is helping them in some way with their grief. That is more than I could ever wish for, and makes me feel like what I’m doing has purpose.

Pekrul, a tenth grader at Oak Park Independent School in Oak Park, said via email that “being at the march in person was incredible and overwhelming. It was one of the most amazing experiences of my life. It was very emotional and inspiring to be marching alongside so many likeminded people who feel as strongly as I do about gun violence. Seeing teens like me fighting passionately for gun reform showed me that we are not just a movement, but an unstoppable force with unwavering determination.”