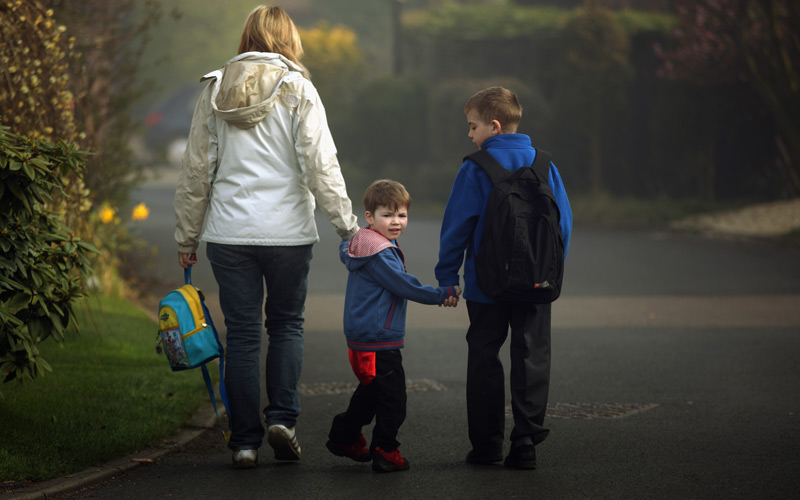 There is a thing all parents do. Our grandparents did it. Our parents did it. We do it, too. Everyone accepts it, as if parents always parented this way. There is even a cultural touchstone—that one scene from the movie we all loved, with that quote all parents say to each other ironically. Yes, some parents agonize over whether or not to do it, and Lord knows kids don’t always like it. This ongoing tension seems to have reached a tipping point, as evidenced by that funny video everyone shared recently.

That thing? We have to stop doing it.

Even though we’ve all baked it into our parenting, it isn’t something most of our ancestors did. It’s new. Like so much of the modern world, it was born of the industrial revolution, and it did not become popular until it reached the United States, when people stopped worrying about starvation and began trying out new lifestyles that were not based on avoiding imminent death. Wealthy people did it first, naturally, but then it spread to the middle class, and now it’s everywhere. Even in weird countries. Like Japan.

In 1877 a French journalist you’ve never heard of asked poignant questions as to whether this was a good idea at all. Here is a quote from his pamphlet, which you will have to re-read several times because people used too many words back then: “If it was not always thus, should it be, when it has not before been a past harbinger of current future tidings?” All concerns raised by this massively forgettable journalist fell upon deaf ears, and for years we have ignored them at our peril.

As this thing spread throughout the Western world, market forces conspired to brand it a hallmark of civilization as they simultaneously attempted to profit from it. In one magazine ad, it was said to “repair our losses and be a Blessing to Parentkind.” The practice even provided the premise of an episode of the now forgotten CBS radio show Father, Son, and Mother. The program was sponsored by a company that made hand soap in the 1920s but now manufactures internal guidance systems for submarine-launched cruise missiles.

Which is not to say it did not have its virtues. It did. Dr. Hrgst Smern, of Berlin, wrote an essay for McClure’s touting its benefits for parents and children. Smern was later disgraced as a eugenist, convicted of war crimes, and shot to death by firing squad, but not before convincing a goodly number of parents that an easier solution was at hand. Smern’s notions were reinforced in medical texts and journals throughout the century, particularly by Sigmund Freud, who argued that both doing this thing and not doing this thing will stunt a child’s development. Benjamin Spock devoted a chapter of his book Baby and Child Care to it, cementing its status as a common parenting practice among Baby Boomers, a group of people who will literally do anything someone tells them to.

It was not until six months ago when Australian scientists researched this thing in baby mice that anyone questioned the practice. Working with a sample size of seven-and-a-half mice (there was some unpleasantness in the lab), the scientists theorized that this thing that we all accept as a common parenting practice could potentially maybe have harmful effects on baby mice, which are basically the same things as human children, according to science.

Based on this research, science-y people said it’s theoretical that a harmful outcome is possible or maybe not, and they shrouded this hedge in so much academic gobbledygook that harried journalists whose responsibilities are increasing but whose time to research and report are shrinking only read the summary and dashed off panic-inducing copy that was then blown completely out of proportion by fake news sites that your aunt thinks are real, and that’s why everyone is freaking out about it right now.

Yes, I personally admit that I do this thing with my kids, which I admit so that you feel both kinship and pity for me. But I can’t defend it, other than to say that experts believe it may reduce our carbon footprint. This is beneficial of course because it reduces our need for natural resources and could help stave off climate change and global doom, which everyone acknowledges are the harshest conditions to parent under, what with the 300 mph winds and boiling oceans and whatnot.

In conclusion, if you stop doing this one common thing—and we’re not saying you should stop, but we’re also not not saying you should stop—then your kid may or may not end up as one of those down-on-his-luck adults who lets billionaire Wall Street guys punch him in the face for cash. If he ends up that way, it’s all your fault, you terrible parent, because you were warned.

Joe Donatelli is a professor of something or other at a college no one has ever heard of. He is the author of Whatever the Headline of This Article Is: Followed by an Ominous Subtitle.